Over recent weeks, the only thing having a bigger meltdown that Boris Johnson (he may be gone by the time you read this) is the RTG Sunderland fans website.

They were kind enough to name check me and combined with the fact I don’t write under an alias, has meant a fair bit of mischief making has come my way via social media.

However, unlike those rascals, I can take a joke in the spirit it was meant and calling me ‘fatty’ or words to that effect, is nearer the truth than an insult.

Anyway, while our glorious Newcastle United owners carry on doing wonderful work in the background, with new players and off the field improvements definitely on the way….

A League Cup tine away at Stoke City in their quite atmospheric Victoria Ground, a far throw from the IKEA flat pack offering they have today, which like most new grounds is sterile and ugly.

There was a similarity to today, because at that time NUFC were flying and tickets for away games were hard to come by. This team was obviously the Entertainers and beating all and sundry with a hatful of goals was the norm, Beardsley, Sir Les, Ginola, Rob Lee, Gillespie were wreaking havoc on Premier League defences. 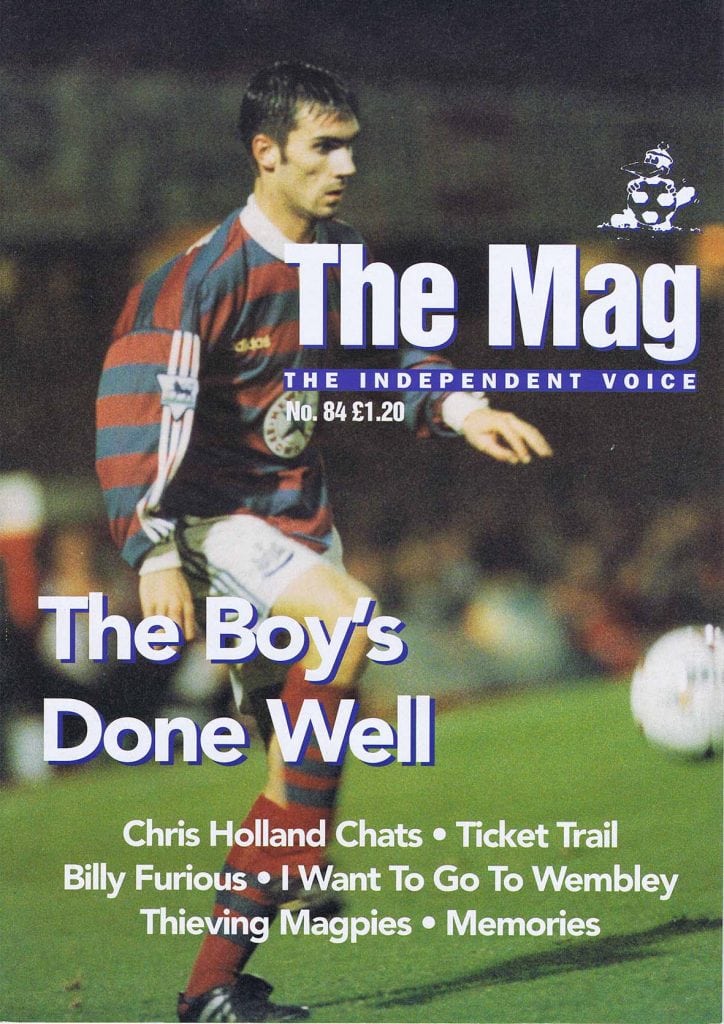 Premier League games were sold out both home and away, so getting tickets for games if you were not a season ticket holder was a challenge to say the least

The League Cup had undergone several name changes and just like today it can be a struggle to fill grounds ( Sunderland got to the final back in 2014, yet their home attendance for the semi final first leg against Man Utd at the SOL was less than 32,000…plenty jumped out the woodwork for the final….a bit of deja vu going on recently).

However, NUFC were crowd pullers and a full house was guaranteed at Stoke City. The game also gave fans of NUFC who did not have season tickets a chance to see them away, as the demand for tickets was slightly lower. So while the game was a complete sell out, the away support did contain a lot of folk who were not regular travellers. Indeed it was noticeable how many families had taken the opportunity to go to the game, nevertheless, Newcastle United had the backing of a sold out visiting end containing around 4,500 fans. 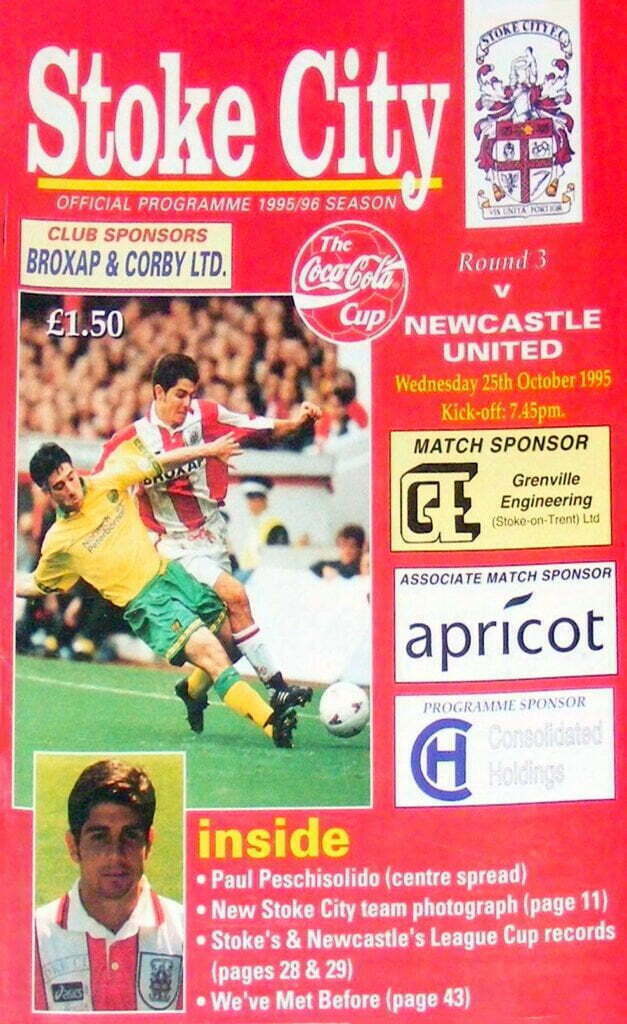 At the time I lived in West Allotment and the plan was to go in a van with a few lads who I knew. Unfortunately, due to work I was running late, so I managed to let the lads know and I had to set off with wifey (at the time) in the car in the early afternoon. It has to be said quite a pleasant drive was had, with lunch on the way somewhere up past Alston, getting near to Stoke (Is there a Stoke? It seems like it’s a few towns rolled into one) the traffic was horrendous and I was cursing the fact we had stopped for lunch.

Time was tight and the Matchday traffic was horrendous, this meant for a 7.45 kick off we did not get parked up until about 6.30. A couple of kindly Stoke City fans pointed the way to the nearest pub but did point out it was home fans only generally, now I had been here a few times before so I know it could be lively, but was not expecting anything of consequence.

The pub indeed was home fans only and it seemed Newcastle United fans could not get in anywhere and were raiding the off licenses and supermarkets and having a beer on the street. I was driving and so we decided to head to the ground, I had colours on but these were partially covered by a denim shirt, wifey also had colours on covered by a jacket.

The road we took brought us to outside the main entrance to the Victoria ground and at this point I heard wifey say to some Stoke fan ‘f.., off you prick’, I turned and saw she was quite animated, as turned out some Stoke City fan had actually tried to trip her up. I told her to walk on and we did, we were amongst a lot of people and we were making our way to the away end.

Then a Stoke City fan, in full view of the police, took a swing at me. I realised we were right in the middle of a group of of their lot who were out for bother, plenty of police around though, so I was not that concerned. That is until she was tripped once more, police again did nothing. So I asked the question, ‘did you see that’, the copper’s reply was ‘you should not be here anyway’, in other words, you deserved it.

I then sought my own justice and took a swing back at the perpetrator, then quickly nipping through the crowd and a police cordon to the vast open space behind the away end. Am I brave? Am I hard? Am I daft? Well, as Meatloaf would have said, two out of three ain’t bad….except in my case, one out of three springs to mind…

Nevertheless, we could now enter the ground.

Inside, there were stories of  bother all over the town from late afternoon. Evidently, news / rumours had spread amongst locals, that a Newcastle fan had allegedly stabbed a pregnant woman, or something along those lines anyway, the story apparently changing with every telling. This leading to supposed justification for the aggression shown toward fans of NUFC that day / night. A fact though, that to this day, there has never been any confirmation / proof of any such incident like that ever having happened.

On the pitch, normality took over, as David Ginola completed destroyed the Stoke City right back, and with Peter Beardsley at his best, we won the game 4-0 and that scoreline flattered the home side. 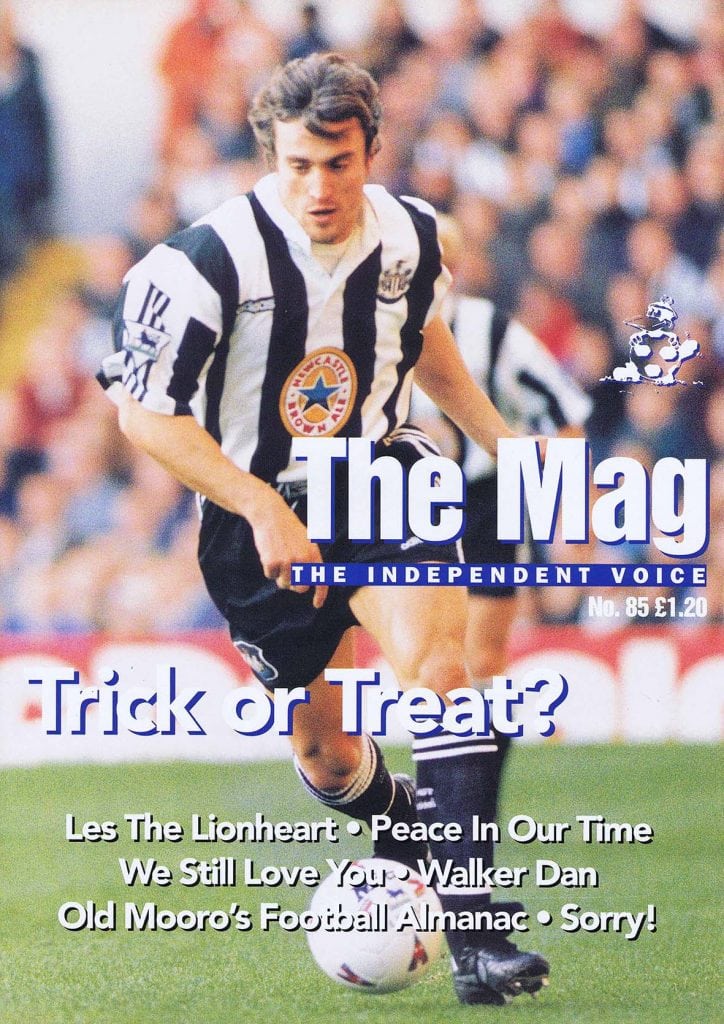 So, what would outside be like after full time?

Well firstly, we were going the opposite way to the main body of Newcastle fans, having parked where we could. Fair to say we got back to the car with ease, it took a while for the car park to clear and the traffic was still heavy, as trying to leave the area the police were forcing all traffic back in a direction which seemed to be heading back toward the ground and the ’town’ centre. It was at this point I saw an abandoned Toyota land cruiser with all its windows smashed. Looking further down the road I could clearly see ’spotters’ stood on corners, as a car four in front of us was pointed out and the occupants attacked, the occupants were wearing NUFC shirts.

The next few minutes were honestly quite nerve-racking, as we saw cars, vans, minibuses attacked, anything showing evidence of black and white. The lucky ones had their cars rocked back and forth, whilst the unlucky ones had windows put out or worse. There was absolutely no police presence at all!

Meanwhile, we edged forward and I was then aware of the spotters gazing into the car. Would no colours stand out I was thinking to myself…then remembered the number plate had something like ’Tyne Motors’ on it and I just knew we could be rumbled. So right outside a pub where locals were hanging outside like a scene from ‘resident evil’ I took a decision, jumped some traffic lights and headed the wrong way down an empty one way street. As it happens, it turned out to be a good decision as it bought me out on a main road heading away from it all, but heading east toward Derby. I didn’t care, we were out of it.

Wifey was quite alarmed at what she had seen and it has to be said, it was up there with the worst I had ever witnessed. In reality, it was senselessly attacking a lot of innocent families and fans and was against the ‘hooligan code’ of only attacking those looking for it!

Once well out of town we continued towards Derby and stopped at a village pub, there were a couple of small other groups of Newcastle fans in there, families etc, each had a story to tell.

The aftermath is well documented. Mark Chester, self-styled leader of the ‘Naughty Forty’ documents it in his book, but fails to mention the reason for why it went off, this story of a pregnant woman getting stabbed is indeed horrific but as mentioned earlier, in reality nothing like this happened, it would have made the national news if any truth existed…

On the night it was confirmed two Newcastle fans were seriously injured and some fierce fighting had taken place near the ground, but it has to be said that the Newcastle fanbase that night was made up of a lot families and children (the match played during the half-term holidays).

In 2008, Newcastle United were set to play Stoke City at St James’ Park on 6 December and there were worries that old scores would be settled. Ahead of that 2-2 draw. Trouble actually flared up on Wrekenton High St in Gateshead on the day of the game, but nothing compared to the events of 25th October 1995.

I have been to Stoke a few times since and it’s one of my least favourite away grounds, not because of the fear of trouble, but because it is a dreary flat pack stadium with nothing anywhere near.

So there you go, Stoke City away, where next…?

The constraint that will inspire Newcastle United transfer business?