Newcastle United fans have been getting used to a very different football club.

The challenge has now changed from how to get rid of Mike Ashley? To, how to get a ticket?

Last season saw home games selling out ever faster, as Newcastle United fans competed online and found themselves in a cyber queue for anything up to two hours or more.

Even when the two St James’ Park pre-season friendlies went on sale this week at prices that were double what Mike Ashley charged for them, Newcastle United fans yet again found themselves in online and physical queues (box office selling to fans in person and over the phone, as well as online for the friendlies), with both the Atalanta and Athletic Bilbao games well on their way to selling out.

As things get progressively more competitive, I have seen plenty of people raising the question of where have all these ‘new’ Newcastle United fans come from?

As with so many things, to understand where we are now, you have to go back in time…

In terms of overall record, the best ever average second tier crowds in history, went through the turnstiles in 1947/48. It was Newcastle United who set the all-time second tier record. In that post-war era Newcastle averaged an astonishing 56,299 when promoted in second place, some one million one hundred and eighty two thousand fans flocking to St James Park to watch the 21 home games.

Twenty seven years later and it might surprise some younger fans to learn that Manchester United had a one-off season in the second tier as recently as 1974/75.

They came straight back up as champions and had an impressive 47,781 average home attendance, with altogether some 1,003,401 paying fans going into Old Trafford that league season for the 21 home matches.

A modern day record that surely would never be beaten…

So, going back to the original question, where now have all these ‘new’ Newcastle United fans come from?

The answer of course is that they are all around us. Always have been, always will be, even after those 14+ years of Mike Ashley. With only the slightest encouragement, so many of those who ended up so sickened, each with their own breaking point where Ashley was concerned, they never stopped loving / supporting Newcastle United.

What is even more remarkable, is that back in 2016/17, that NUFC average home attendance would have been far higher, if Newcastle United’s capacity had been higher. The vast majority of games were sold out and so there was a ceiling on how high the average could be at the end of the season.

Contrast that with Man Utd in 1974/75, yes their 47,781 average in the second tier was impressive, BUT way behind Newcastle’s in reality. The Old Trafford capacity was actually 60,000+ that season, indeed their highest home gate of the season was 60,585 for a 3-2 win over…Sunderland! On average, some 13,000+ missing Man Utd fans each match, compared to what Old Trafford held.

Newcastle United have always had massive support, despite being such a badly run club for these past almost 70 years. It has always needed just the slightest encouragement and the proverbial sleeping giant didn’t just wake up, it went bananas.

When Kevin Keegan arrived as a player in 1982 when Newcastle were going nowhere in the second tier.

When Kevin Keegan arrived in 1992 when Newcastle were heading into the third tier.

When Rafa Benitez agreed to stay on in summer 2016 despite facing a second tier campaign.

Even in 2008/09, when the mood was vicious. Relegation on the back of Mike Ashley treating Kevin Keegan so badly, so many players sold, Chris Hughton allowed no budget to buy any players in summer 2009, yet Newcastle United still ended up with a total of 997,916 watching the 23 home Championship matches, at an average of 43,388.

When Newcastle United fans now talk of potentially filling an 80,000 seater stadium, I am always puzzled at those other NUFC supporters who treat the idea as ridiculous. I expect nothing less from our enemies BUT the facts / reality scream why not??? At least they do to me.

Just because Rafa Benitez gave a little bit of hope in 2016 by staying on despite relegation, Newcastle United fans responded and filled the stadium week after week, this is not normal! Remember, for example, when NUFC went down in 2016, Aston Villa also were relegated. They responded by closing large areas of Villa Park due to lack of demand because of relegation. Ending up averaging 32,107 at home games, not bad, but a country mile behind Newcastle United.

Remember as well, that both of these relegations happened during an era when pretty much all NUFC hated the owner, whether they still went to matches or not. 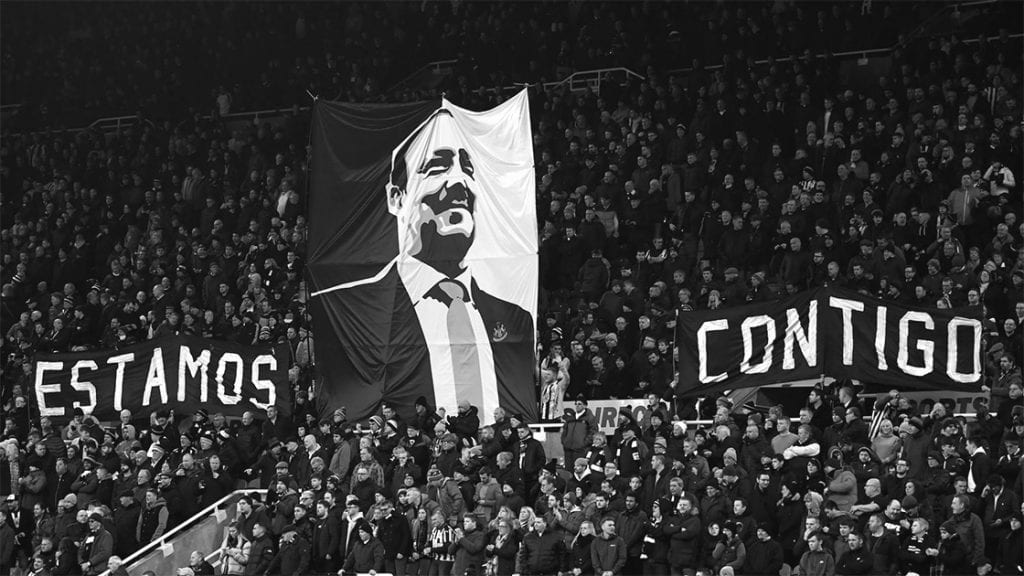 If the club could attract 52,000 full houses week after week in the Championship under Rafa, why would anyone doubt that in the Premier League and with ambitious owners, we couldn’t get another 25,000-28,000 Newcastle United fans wanting to go to matches? You are talking about a 50% increase on those second tier crowds, when you really think about it, surely it is pretty much the norm that any club coming up from the Championship is capable of increasing their crowds by 50% in the Premier League.

It is just that Newcastle United are on a whole other level compared to pretty much any other club.

All we are talking about for me, is realising the potential at our football club, on and off the pitch.