It was 1999, Sir Bobby was starting to work his magic (how I wish we had got him when King Kev left, instead of Kenny dogleash) and a trip to the eternal city to watch us against Francesco Totti and his Roma boys.

A minibus was booked for the trip down to Stansted for our flight to Rome.

Now at the time, Stansted had a deal on cooked breakfasts, buy one and get unlimited bread to go with it, so after me and monty had gone for a Warburtons, off we go.

In Rome, digs secured then out off down Rome High Street, for a look at the colosseum and wasn’t disappointed. The lads had pictures taken with our flags inside the colosseum, then off on the drink. However, I was fascinated by the place and ended up tagging along with a tour group which was one of the most educational events I’ve experienced.

Match day and about 120 of our lads ( not lads fans Mr Bazooka I may add) meet outside the train station for a few Morrettis. This kid from Bolton turns up and is telling anyone who would listen, that he’d been to the Olympic stadium with Leeds United and had come a cropper with Roma ultras.

So teatime comes and I check out the Rome transport system, and decide, get the metro up and then off it two stops before the ground, then trams up to the match.

We find a bar just outside the tram station when we had got off the metro and we’re having a bevy, when the local police join us. No dramas with them until this young guy who was obviously in charge of them comes storming into the bar wanting to speak to our leader (we don’t have one, no egos in the bender squad). Anyway, Mr Chief of Police makes a beeline for me, shouting at me, demanding what our plans are and he needs me to take charge and follow his instructions. Him addressing me “who is in charge “,very loud and aggressive, then it happens. The place goes silent and then Phil Flavel stands on his seat and proclaims “I am Spartacus’, another one of the lads stands up ‘No, I am Spartacus “…cue raucous laughter, even Mr Capitano police chief had a giggle.

Anyway, onto the match.

Alighting the tram, Roma’s ground is a bit like Wembley way, with trees lining the sides. Now our Leeds loving Bolton / Leeds friend had warned us that the ultras would hide in the trees armed with knives waiting for you..so walking up the tension was very palpable, until Phil Flavel again broke it by singing at the top of his voice “we are the Christians, we hate the Romans “,..cue more laughter.

Anyway, we reach the ground, only to find out we are at the wrong end, and hey ho, about 30 Roma youth ultras face off with us by waving Stanley blades at us, stick or bust?? There’s only two young copper lasses between us and a slashing. So I decided to take matters into my own hands, walking up to bouncing knife wielding youths, I smack what looks like their leader, he goes down and the rest back off (probably to tell their mates next day at school what happened).

Into the match and Sir Bobby plays it defensive and we lose 1-0. To a Totti penalty. 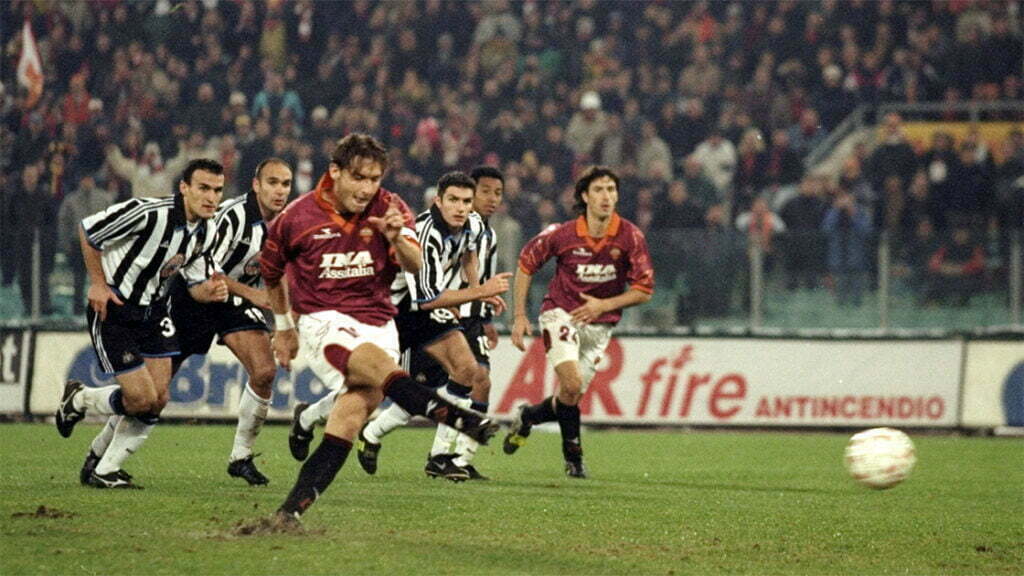 After the game, back into Roma then flight back to Stansted. Minibus home which dropped me back in Low Fell, only for the minibus to break down at the top of my street. So when I was in bed, the lads had another two hours to wait.