Newcastle v Nottingham Forest tickets went (very briefly!) on sale this morning – Anybody get one?

Newcastle v Nottingham Forest tickets went on sale at 10am this morning.

These were the final tickets to be made available for this game, with the club making

The club announcing (see below) that an unspecified number of Newcastle v Nottingham Forest tickets were now available to those without season tickets or memberships.

This will be the case ahead of each Premier League match and is reportedly due to Premier League rules requiring all clubs to make a small proportion of tickets available to the general public, although NUFC haven’t given any explanation themselves.

Early on today I flagged up this sale of Newcastle v Nottingham Forest tickets in advance via an article on The Mag, I also asked if fans could let us know in the comments section afterwards, what their experience had been if they went online and tried to get tickets today.

‘Total waste of time (a con?) tried for seats that showed were available yet were not.

Still shows that you can add tickets but there’s nothing there. Poor show toon have to do better.

Just a thought, why sell memberships when members are in a lottery to get tickets? Far better not letting season ticket holders get other tickets.

AND to all the season ticket holders and members who are selling via websites for over £170-£200 you should hang your head in shame…greedy baskets.’

‘I got “let in” at 10:15 expecting to go straight to tickets for Forest but got confronted with various options, stadium tours etc.

When I finally got up a map of the stadium it suggested some areas still had seats but I couldn’t find any whichever area I clicked on.

I wish it had just told me while “queuing” that all tickets had gone so I wouldn’t have wasted the time looking when I should have been working!’

I know that when demand exceeds supply and nowhere near enough tickets compared to the number of fans who want them, then impossible to keep everybody happy.

However, I do think that the club need to be a bit more open and transparent, give fans more information around the ticketing issues.

The ticketing website isn’t great and needs improving, when you are in these online queues it can be a nightmare, especially when you then find yourself eventually allowed into the ticketing site and still find there’s no way to buy a ticket, even though it looks like there are some still unsold.

I think they definitely should be giving at least a rough idea of numbers of tickets as well. When the club earlier this summer put a ‘limited’ number of season tickets on sale, they didn’t indicate how many BUT then across the media you had journalists claiming it was only 1,000 going on sale. Tens of thousands went online chasing these season tickets and of course vast majority left frustrated, if the club let journalists know on the quiet, why not just tell fans direct exactly how many / how few were going on sale.

My assumption was that this morning, minimal Newcastle v Nottingham Forest tickets would be going on sale in this general public allocation and I was doing some work so missed the 10am start of the sale, when I did log on around half an hour later, it showed at least over 18,000 had bothered to join the queue to try and get a ticket for Forest… 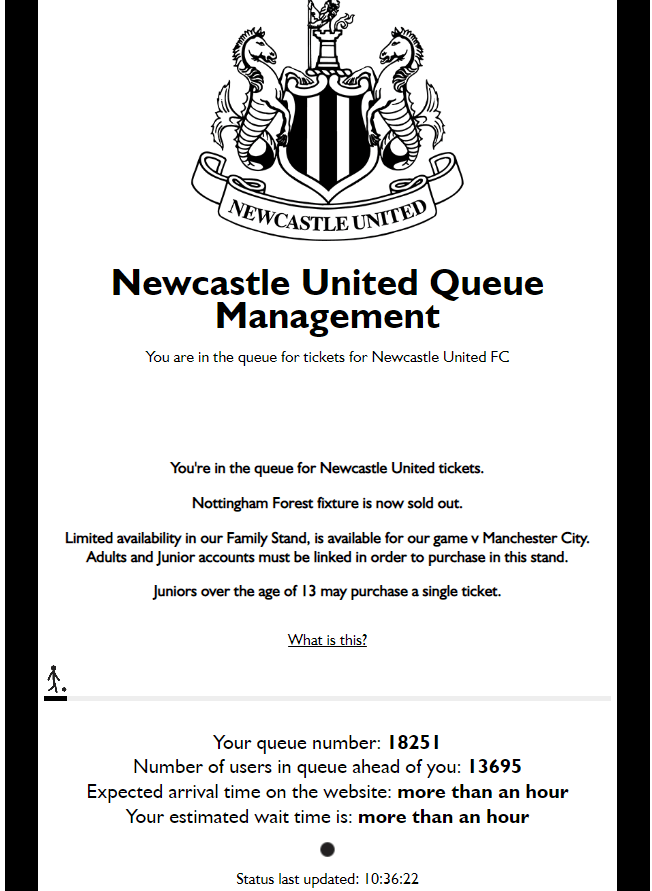 If they club had said in advance that for example, only hundreds of tickets would be going on sale (which may well have been the case), at least Newcastle fans could make an informed decision on whether to put their time and energy into trying for tickets.

A limited number of tickets for Newcastle United’s opening game of the Premier League season are now on online general sale.

Seats for the category B fixture against newly-promoted Nottingham Forest on Saturday, 6th August (kick-off 3pm BST) went on sale to Members on Tuesday, 12th July with one ticket per qualifying supporter number and online sales only from book.nufc.co.uk.

A small number of tickets were then released for online general sale at 10am on Tuesday, 26th July. They are available to supporters without a season ticket or Membership, with one ticket per supporter number. Supporters can assign to friends and family once the tickets are in their basket to enable groups to sit together where possible.

If you want to assign tickets/buy on behalf of other supporter numbers, your accounts need to be linked.

Once you reach first place in the queue, you have ten minutes to enter the site to continue your purchase – if you do not do this, your queue number will be rejected.

Delivery will be in the form of paper tickets. To purchase tickets, visit book.nufc.co.uk.