Lucas Paqueta has repeatedly been linked with Newcastle United.

The fact that his best friend and former Lyon teammate (and current Brazil teammate) Bruno Guimaraes is already on Tyneside, has obviously helped fuel these rumours / links.

Now L’Equipe have reported that their information is that Lucas Paqueta has handed in a transfer request to Lyon, with the Ligue 1 club claimed to be ready to sell if a club meets their asking price.

Whilst many in the media have repeatedly said that an attacking midfielder is not a priority in this window, if indeed there is substance in this L’Equipe story of transfer request handed in and Lyon willing to sell, then it could prove an irresistible proposition for Eddie Howe and the Newcastle United owners.

The situation not that dissimilar to January and Bruno Guimaraes. The absolute necessity then was players to come in and battle against relegation, yet NUFC also went for Bruno G, as well as Targett, Burn, Trippier and Wood. Those four Premier League experienced players went straight into the relegation fight, whilst Eddie Howe took his time with Bruno G, the midfielder not making his first start until mid-March and Bruno’s first home game in the starting eleven wasn’t until April.

Needless to say, with Guimaraes already at Newcastle, that would for sure help Lucas Paqueta settle in very quickly.

Lyon started their pre-season action with a friendly at lower league Bourg-en-Bresse on Saturday night, leading 1-0 at half-time, Lucas Paqueta was one of many changes at half-time when he came on and 0layed the second 45 minutes, Lyon eventually winning 4-2.

Tuesday sees Lyon play at home to Dynamo Kiev, before then Anderlecht away next Saturday.

To land the Lyon midfielder, the Newcastle United owners know it would take a new club transfer record to land Lucas Paqueta. Bruno Guimaraes cost £35m plus £6.65m in future add-ons, that £41.65m total exceeding the £40m paid for Joelinton in January 2019.

If a bid for Lucas Paqueta was successful, it would mean an all Brazilian midfield trio with of course all three of the club’s most expensive signings from Brazil, unless somebody else is signed this summer by Newcastle United for more than £40m…

Difficult not to get VERY excited at the thought of this signing potentially happening.

Lyon aren’t in a great financial state and that played a part in their eventual willingness to sell Bruno G in January. Lyon have now finished eighth in Ligue 1 and so have no European football to look forward to, which is the only route for all French clubs (apart from PSG ) to be able to try and compete financially, due to the very low money that is generated by participation in domestic football in France.

Lucas Paqueta still has three years left on his contract that ends in June 2025 BUT if the player does indeed want to leave AND Lyon could do with the money, then just maybe Newcastle United could be in business, if of course Paqueta would choose Newcastle over the likes of Arsenal and other clubs that are claimed to be interested.

The ace in the pack of course is Bruno Guimaraes and the fact he is best mates with Lucas Paqueta, having played together at Lyon and for Brazil.

As things currently stand, Lucas Paqueta has made 33 appearances for the Brazil first team and scored seven goals, whilst Bruno Guimaraes has made eight appearances and just that one goal so far. Both players will be heading out to Qatar in November as part of the Brazil squad.

Less than two months ago, Lucas Paqueta and his partner visited Tyneside in May to stay with Bruno G and his partner, the quartet looking very happy as they toured the sights of Tyneside and posted photos on social media… 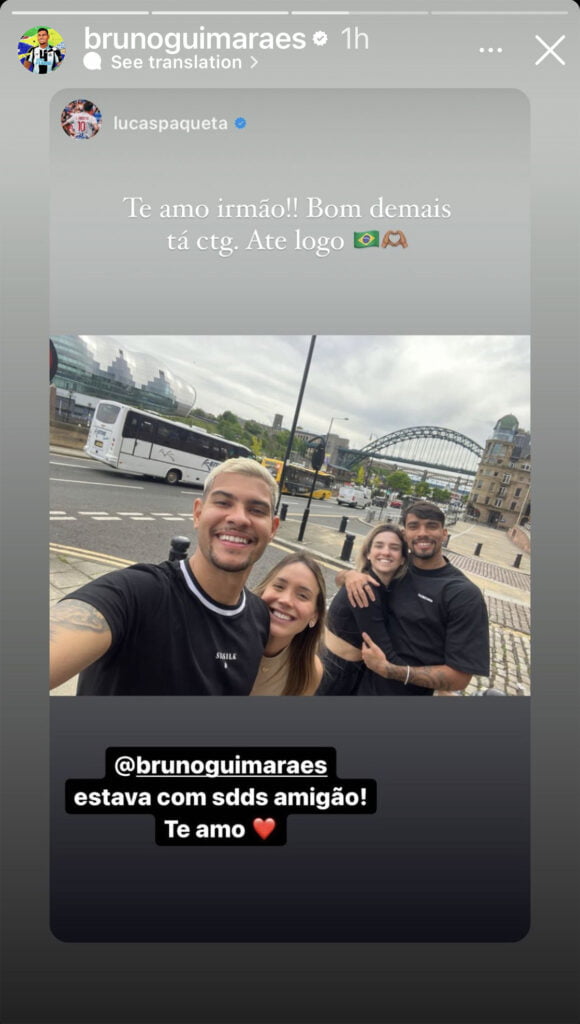 If no other further signings happened this summer, if only this one did become reality then it could prove a massive transfer window of progress.

Lucas Paqueta on the other hand, in 64 starts (and 10 sub appearances) for Lyon in the league and in Europe, has scored 20 goals and got 12 assists, on average a direct goal contribution (scoring or assisting) in every other start. Sounding exactly the kind of signing Newcastle United could do with.

We are now less than four weeks away from the new Premier League season kicking off, so no time to lose if indeed there is a chance of landing Lucas Paqueta.

How great does it feel to be able to dream again? Whether or not this particular signing does or doesn’t come off, to have at least this level of player as a possibility is a great feeling after the 14+ ambition-free years of Mike Ashley.