We’ve all heard a lot about Elliot Anderson and his half season loan spell at Bristol Rovers.

I’m based forty-five minutes from Bristol and know plenty of Bristol Rovers fans. I was a tiny bit gutted that they won automatic promotion as I’d put aside the weekend of the play-off final in the hope I could go down and watch our boy at Wembley. I’m sure plenty of other Newcastle fans would have done likewise.

It was frustrating that I didn’t get the opportunity to go watch him whilst he was down this way. There were two league games that I’d earmarked but events transpired to ensure I didn’t attend either.

As mentioned though, I know plenty of Bristol Rovers fans and I got plenty of feedback during his spell there.

After Rovers played Colchester United, a game in which Elliot Anderson got the only goal, an old friend from my school days sent me the following message:

‘That lad makes grown men look like boys. The right back from last night will be having nightmares all week. They sent help out to him and he still did both of them.’

On the final day of the season, Bristol Rovers had to register an unlikely 7-0 victory to sneak into the final automatic promotion spot on goal difference. They did and Anderson scored goal number 7. That same friend sent me the following:

‘Mate, from all Bristol Rovers fans we thank you for Billy. We would have got nowhere near promotion without him. I’m glad he got the winning goal.’

My son’s grandad is as ardent a Gashead as they come. He travels to every game home and away and has done for many years. He’d been passionate in his endorsement of Elliot Anderson from his first few games. When the season ended, I asked him his thoughts on Anderson’s future. He told me that he’s got all the skills to go to the very top and that he was the best player he’d ever seen whilst following League Two and League One football with Rovers.

It’s not surprising to understand why the Rovers fans are so enamoured with him. He joined them in mid-table and helped drag them all the way to third, contributing seven goals and six assists in 21 games. That’s a goal or assist more frequently than every other game.

His header for number seven in that incredible season-ender was stuck on a massive billboard in Bristol for all to appreciate. 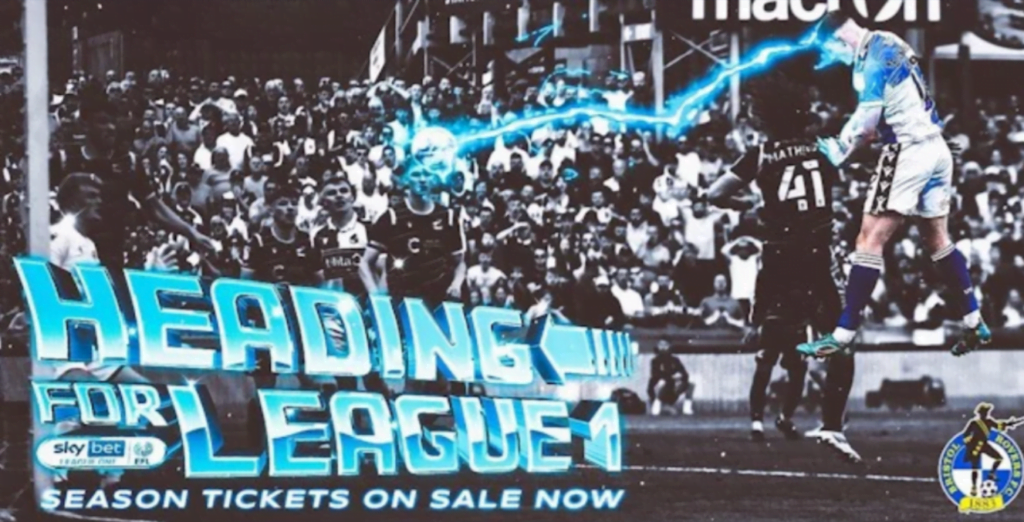 So, what do we do with Elliot Anderson this season? Do we send him back out on loan?

Rovers would take him in a heartbeat but, surely, we need to test him at a higher level now. If that’s the case, then it’ll probably be the Championship. If we could get him to an ambitious Championship side that’s likely to finish in and around the play-offs, that could be a good fit.

Not for me, though. I would keep him in the squad. As important as first team minutes are, I think he could play a part in our season. He’s young enough to not take up an official squad place so he’ll give us an extra option beyond the registered 25 players. This could be important if we can’t shift out enough players in this window and end up with a player deemed surplus to requirements absorbing a squad place. I love Ritchie for all he did for us previously but I would definitely prefer to have Anderson coming on for the last twenty minutes/half an hour. I think Murphy can do a job as a squad player slotting in across multiple positions but, again, if I had both him and Anderson on the bench, I would lean towards seeing what our local lad could do.

Let’s think about a different element to his development too. Yes, game time is the most important factor in physical and mental progression but would you rather have Anderson being trained by a Championship manager and training alongside Championship players, or would you want him in our set up? Training every day alongside Bruno, Trippier, Wilson et al. Being coached by the resurrector of careers, Eddie Howe.

Pre-season will tell us a lot and Howe has been clear he will be looking at Elliot Anderson over this period. He started at the weekend against Gateshead and played a big part in a couple of the goals. Having seen the highlights, it was a game played at half pace and was more of a training session than a friendly. However, these early friendlies are all about getting players back up to pace and will never be the most competitive. Let’s see how he fares against the tougher European opposition we face later this month.

Given the choice, I would keep him here at least until January. We are allowed to make up to five substitutions per game next season so there should be ample opportunity to get the lad on the pitch and racking up minutes in his hometown colours.

Develop him the way Foden was developed. Ease him into the team and, who knows, he may be an integral player come the end of the season.

The Paqueta links are resurfacing and I would love it if we signed him. If we got someone of that ilk in, then it’s another player for Elliot Anderson to learn from. If we don’t make a signing of that calibre then, in a year or two, we could be patting ourselves on the backs for saving £50m / £60m due to a local lad succeeding.

I think mixing with this squad and getting as much game time alongside the talent we now have at St James’ could be the very best thing for him right now.

(PS Someone have a word. If Elliot Anderson has got the potential to be as good as some think, there’s no way he should be wasting his international career with Scotland.)