Gabby Agbonlahor clueless as ever about Newcastle United

Gabby Agbonlahor has been talking about Newcastle United.

Gabby Agbonlahor giving us the benefit of his ‘expertise’ about Newcastle United and the current summer transfer window.

“I think Newcastle’s squad could do with more surgery.

“They could do with another striker as back-up to Callum Wilson.

“Chris Wood is not good enough.

“That was a crazy signing at £25million.

“If they could send him back to Burnley for £6million or £7million, they would.

“They need better quality now as back-up to Callum Wilson.

“He has his injury problems as well, so you don’t want to be left with Chris Wood.

“Another striker and another couple of wingers too. I like [Allan] Saint-Maximin but he blows hot and cold. Almiron doesn’t get enough goals or assists.

“I feel they need some more players in there and Eddie Howe will be looking to strengthen that squad.”

I don’t have any problem whatsoever with Chris Wood being one of Newcastle’s strike options going into the new season, Callum Wilson set to be first choice centre-forward but the Kiwi striker offering something different and I’m sure will contribute plenty next season, mainly from the bench.

As for last season…I think I only need to present two pieces of evidence.

How Newcastle United did before Chris Wood signed on 13 January 2022 (Table via Transfermarkt): 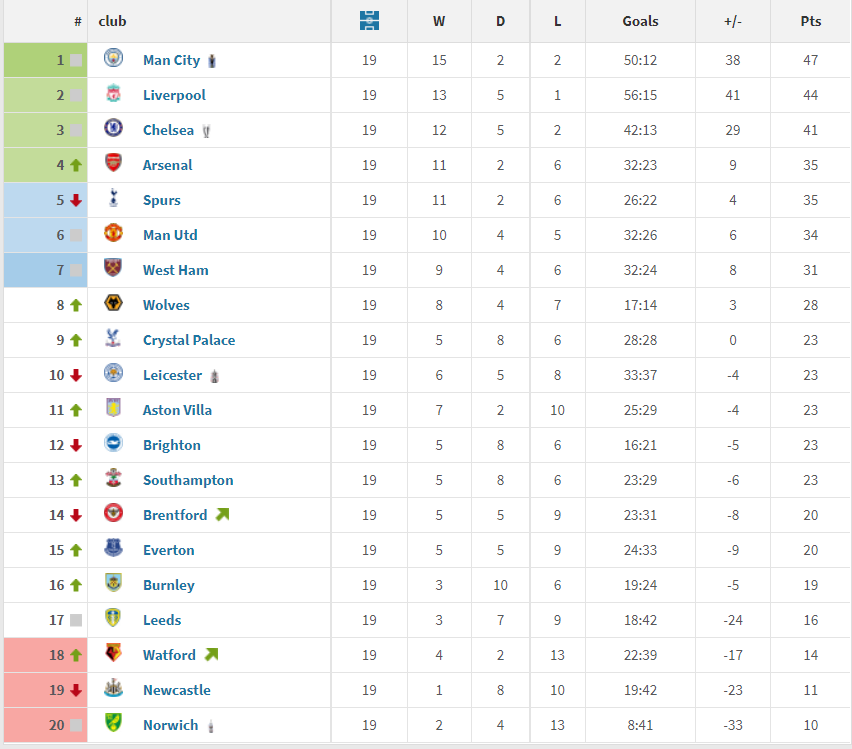 How Newcastle United had done by the end of the season with the help of Chris Wood:

As things stood on 13 January 2022, halfway through the season, Burnley were fifth bottom on 19 points and relatively comfortable, whilst Newcastle United had only won one game and no club had ever survived in the Premier League era when only having 11 points after 19 games.

After Chris Wood swapped clubs, the second half of the season saw a remarkable 22 points turn around between Newcastle United and Burnley, with the latter relegated and NUFC finishing very comfortably in eleventh. Indeed, Chris Wood helped Newcastle have the third best form in the second half of the season, only Liverpool and Man City doing better than NUFC’s 38 points in the final 19 games.

With Callum Wilson having picked up a likely season ending injury in the final Premier League match before the January 2022 window opened, it left Newcastle without any viable Premier League level striking option.

With clubs refusing to let go of their main strikers mid-season, Newcastle United took the brave but pragmatic option of triggering Wood’s £25m release clause. Fully in the knowledge that they were probably paying around twice as much as the striker was worth (to most clubs) BUT absolutely worth it to Newcastle at that time, due to the circumstances they found themselves in.

Whilst he only scored two goals in his 15 starts with Newcastle United this past season, the unselfish role that Eddie Howe had Chris Wood playing was one of the factors in a dramatic upturn in results in the second half of the season, with nine wins, two draws and just the four defeats in the fifteen matches where Chris Wood was named in the starting eleven. It was 29 points for NUFC in the 15 Wood starts, averaging an outstanding 1.93 points per game.

It would be daft to say that Chris Wood was entirely responsible for that second half of the season turn around BUT it would be arguably even dafter to claim that Newcastle United made a ‘crazy’ signing in January, when paying the £25m.

Even at £25m, Burnley were gutted in January when they couldn’t keep Chris Wood, their worst fears very much realised when without Wood they were relegated come the end of the season.

Incidentally, Newcastle United also had a second half of the season 16 points turn around with Aston Villa, the club Gabby Agbonlahor idolises…