It is coming up to six months since Bruno Guimaraes signed for Newcastle United.

Quite incredible to think he has only been at St James’ Park since 30 January 2022, considering the impact he has made on the club and of course, the Newcastle United fans.

Bruno Guimaraes carefully managed by Eddie Howe in his introduction to Premier League football, having to wait until 10 March for his first Newcastle start – an outrageous back heel winner against Southampton. Then his first start at St James’ Park not coming until almost ten weeks after signing, as Newcastle beat Wolves 1-0 on 8 April.

In all, Bruno Guimaraes only starting 11 Premier League games plus six brief sub appearances, his 1,032 minutes bringing five goals and one assist.

However, it was his all round game that attracted Newcastle United, as in 70+ appearances for Lyon, the Brazil international midfielder had scored only three goals.

Interesting now to see that after Crystal Palace signed Cheick Doucoure this week from Rennes, this stats comparison table was used to show how good Doucoure is and just what impact may be possible at Selhurst Park.

When Newcastle United bought Bruno Guimaraes, there was a lot of talk about his underlying stats being outstanding, which this table certainly backs up.

Top independent Crystal Palace account HLTCO has highlighted this table and the Bruno Guimaraes stats relate to his form for Lyon in the first half of last season, that helped prompt Newcastle’s move for him: 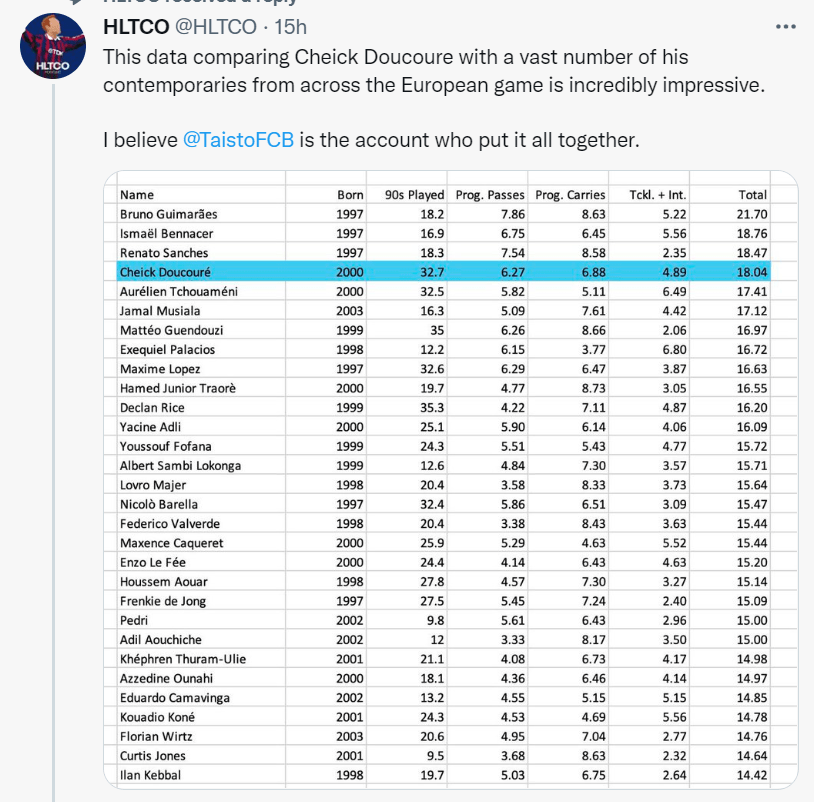 As you can see, a certain Bruno Guimaraes at the very top.

Interesting to see as well, how various fans reacted to the stats table.

But it’s got Guimaraes 10 places above Declan Rice.

And I’d imagine virtually every manager in world football would rather have Rice than Guimaraes, but he still looks a great signing.’

(Newcastle fan) ‘Out of curiosity have you watched Bruno g play?’

(Newcastle fan) ‘Looks an excellent player. I know a lot of the Newcastle fans who do Analysis work wanted him badly.’

(Newcastle fan) ‘Bruno proving he’s better than the lot of them. These are facts. Rice is massively overrated because he’s English. He’s decent, but no better than average.

I’d rather have Bruno alongside fried rice than Declan Rice.’

(Crystal Palace fan) ‘Guimaraes is a player btw been unreal since coming to the prem if we can get doucoure on those levels were in for a treat.’

Obviously, nothing better than seeing with your own eyes what a player can do.

As Newcastle United fans we have certainly seen that with Bruno Guimaraes and these stats above simply back up that evidence of what we have enjoyed so far.

I can’t wait for the season to kick off and see what Bruno G can deliver after a full pre-season with NUFC.