Sven Botman will shortly be signed off as Newcastle United’s third summer signing.

Tuesday night brought an announcement by NUFC that the deal had been agreed in principle by all parties.

However, final completion would happen by the end of the week once the ‘formalities’ had been taken care of.

However, in a new interview over in Holland, Sven Botman has revealed that he was very disappointed that the move to St James Park didn’t happen in January. The central defender had wanted to move but Lille were reluctant back then, as they were in the knockout stages of the Champions League (eventually exiting at the last 16 stage to Chelsea).

In the bigger picture though, Sven Botman thinks things may have ended up for the best anyway. As he now gets a proper pre-season with his new teammates before the new season starts for Newcastle United, plus he got the chance to end things properly with Lille – able to play in the knockout stage of the Champions League before leaving and able to say a proper farewell to the French club and their fans.

It has been well documented that both AC Milan and Newcastle United were competing for the 22 year old this summer, Sven Botman explaining that the exciting potential of Newcastle United moving forward and the chance to now play in the Premier League, trumped what Serie A winners AC Milan could offer, including Champions League football (at least in the short-term).

“Ultimately, Newcastle United’s great project, in combination with the chance to play in the Premier League, was the deciding factor (in choosing Newcastle).

“That last one (playing in the Premier League) has been a dream my whole life. 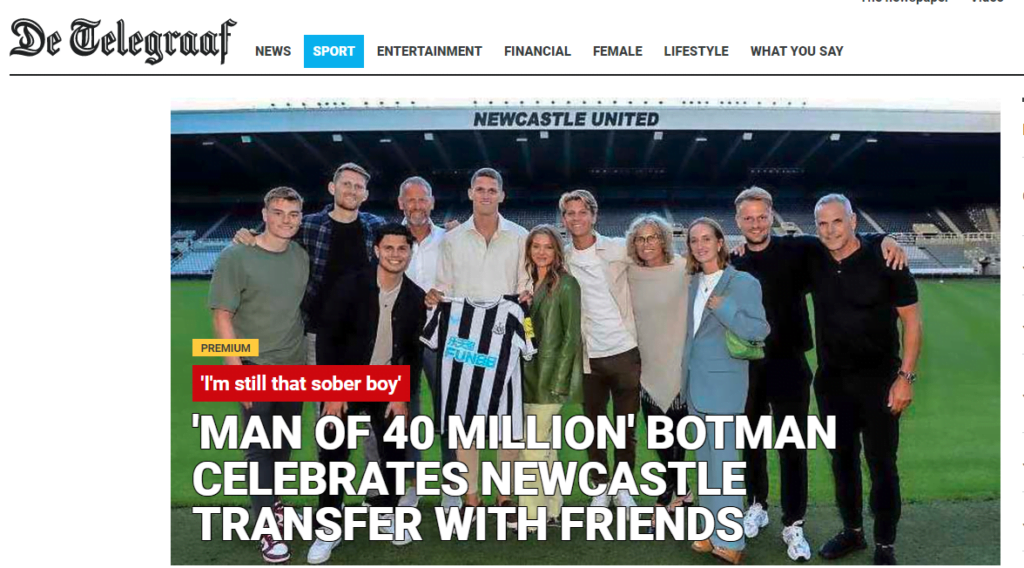 “I really wanted to go to Newcastle United in January.

“It’s a cliche I know, that a train like this doesn’t pass by very often (such an opportunity), but the clubs (Newcastle United and Lille) couldn’t figure it out.

“In hindsight this (moving this summer rather than January) might be better.

“As I can now experience a lot of preparation (for the new season) and I was able to say goodbye to Lille in a beautiful way.

“That club deserved it.

“Staying (at Lille) wasn’t a punishment for me in January either, as I knew there were two great Champions League games against Chelsea coming up.”