On the subject of the Newcastle United shirt sponsor, towards the end of the Mike Ashley era, The Mag kindly published my article concerning a different approach.

As was the case then, the current sponsorship advertises gambling, reported to be worth around £6.5m to £8m.

While this is a lot of money; in terms of Premier League level business, relinquishing it for charity would have a marginal impact. Moreover, it would say something very positive about a new era at Newcastle.

My original suggestion made no impression inside St James Park, however, today, St James Park is a different place.

Mike Ashley has gone, United have a manager with vision, there is a full house at every game, Joelinton has been voted Player of the Year and the team plays to win.

So, surely now could be an ideal time to think about putting even more distance between Mike Ashley and the club

Proposals are too late for the coming season, so this is for the future. There is no precedent of a Premier League club ‘giving’ their shirts to charity; but many successful businesses give big time, so the idea is not that radical.

What a statement it would be if every player chose a charity for their shirt?

It’s tempting to imagine the front line players wanting to have ‘The Alan Shearer Foundation’ across their chests. The foundation was set up to directly support the Alan Shearer Centre in Newcastle: a highly specialist, disability, respite, residential and social provision for people with complex disabilities and acute sensory impairments. The chances are players would also hope that a bit of Shearer magic might just rub off.

My last replica shirt was in the Northern Rock days. The only reason I could think of for having a Wonga shirt, was to burn it.

However, the idea of 50,000 fans with Alan Shearer’s name blazoned across their shirts could be inspirational.

My suggestions have a serious side. United’s principal sponsorship deal is with China-based on-line betting company Fun88. In the whirlwind of takeover and the hard climb from bottom to mid-table; a question is, has the club had time to think about the effects of its endorsement of gambling on supporters and the people watching United’s games around the world?

(ED: Pictured below is a recently ‘leaked’ image of what is claimed to be the new 2022/23 NUFC home shirt, obviously without next season’s Newcastle United shirt sponsor added at this point,) 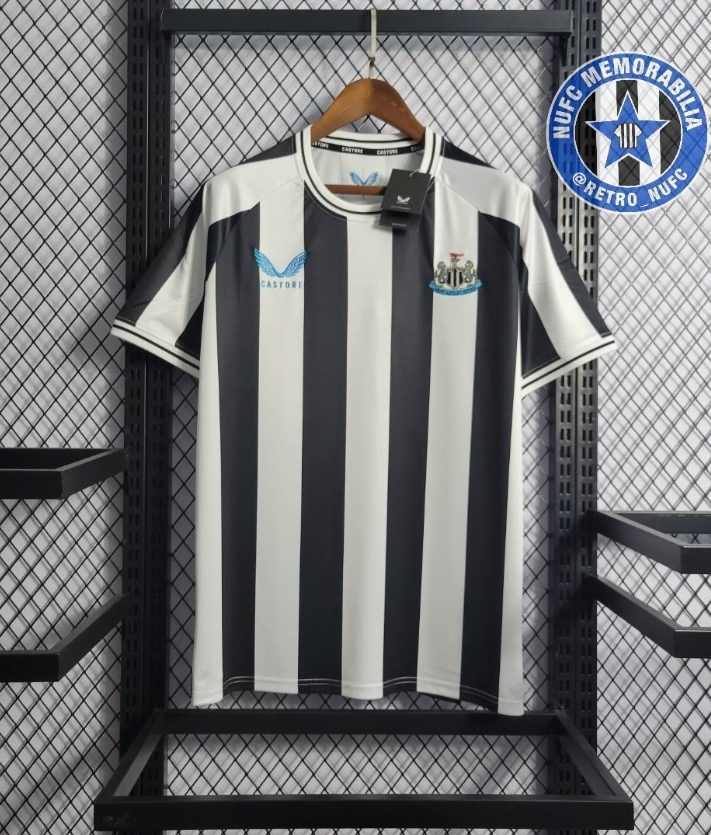 Many people enjoy responsible betting, can afford to lose and know when to stop. However, according to a Select Committee report, a rising number of people, especially the young, are becoming ‘problem gamblers’.

If an analysis was done, it would find that the cost to the North East alone for United’s acceptance of sponsorship from a betting company has a debilitating effect. This is especially true for the families of problem gamblers; and the social effects which, in the main, arise from the 90% of gamblers who lose.

The report ‘Gambling Harm, Time for Action’, says that as a result of gambling, two million people in the UK are harmed by the break up of families, crime, illness, loss of employment and loss of homes; and ultimately in some cases, loss of life. The strain on social services is immense.

Sadly, on average, one UK gambler commits suicide every day. Whilst an estimated 55,000 problem gamblers are aged between 11 and 16, even though they are not old enough to place legal bets. So there are good reasons to believe that Fun88’s money is not worth the human cost.

If United decided to support charities, the Alan Shearer Foundation would be a popular choice for strikers; so how about the Air Ambulance, Help for Heroes, Macmillan Cancer Support, UNICEF, NHS Charities, RSPCA and many more for the rest of the squad? The black and white Giant panda logo of the World Wildlife fund would undoubtedly be a hit.

Finally, I am not a betting man; but if when it comes to the Newcastle United shirt sponsor, if NUFC showed the Premier League an alternative way and broke the grip of gambling endorsement, I bet other clubs could follow.