The club announcing last week that a ‘limited’ number would go on sale today to those who were eligible.

To be eligible you needed a purchase history, basically meaning that you could try and buy Newcastle United season tickets if you had bought any ticket (match by match or season ticket) or membership from July 2019 onwards, not before.

However, if you still have a season ticket, you couldn’t use that to buy another one.

I knew it would be a ‘little’ tricky this morning.

Whilst the club had given no indication other than ‘limited’ as to how many Newcastle United season tickets would go on sale today, there were widespread media reports immediately following last week’s club announcement, stating that only around 1,000 would be going on sale.

I tried two different ways of queuing this morning for the 10am sale and whilst one of them ending up with me 27,000+ in the queue for Newcastle United season tickets, my other log in on a separate device had me within the first thousand. Result!

For those of you who haven’t experienced the NUFC ticketing site, this is the kind of thing you see when in the queue, constantly counting down. 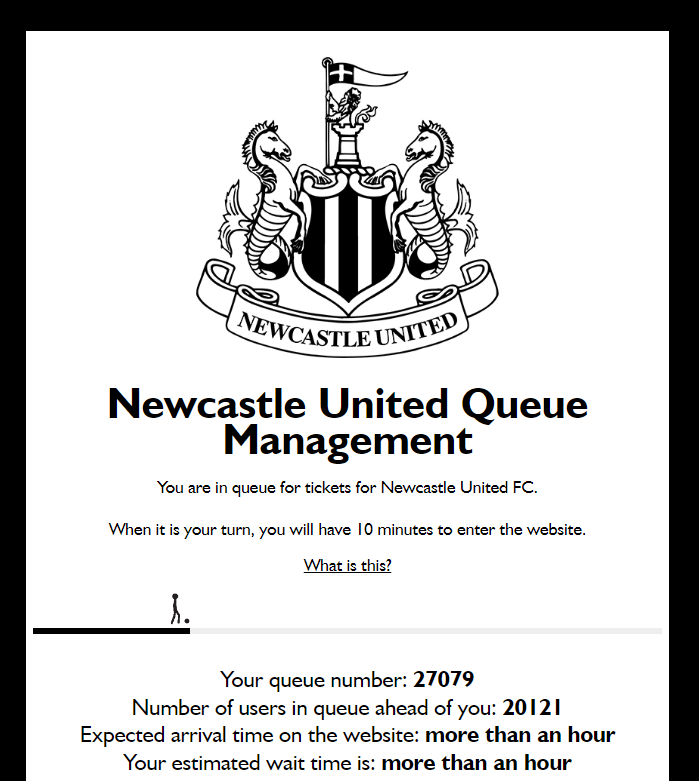 Anyway, whilst this one was obviously a write off, I watched it swiftly count down on the log in where I was within the first thousand.

I got to the front of the queue and then as usual (as when I have queued online for match by match tickets) it said it would now be redirecting me to the ticket site so I could be one of those buying Newcastle United season tickets.

Instead I got this… 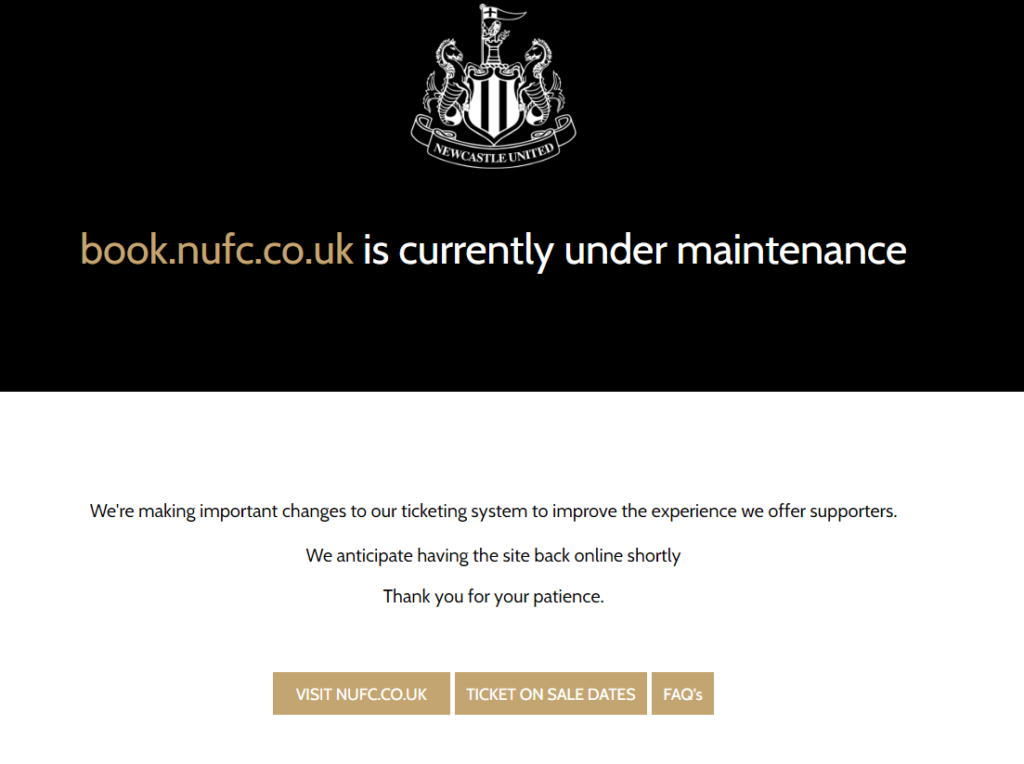 This was very reminiscent of issues late last season, especially with the Liverpool home match, where the club ended up postponing the sale due to ‘technical’ issues.

When looking elsewhere online it turned out I was not the only one, many other fans getting a high place in the queue, waiting and waiting, then when redirected to buy their Newcastle United season tickets, instead getting this message above.

Had I simply been unlucky and just as I got to the front of the queue they sold out…or was it the ticketing website crashing yet again?

Well, judging by how many others this happened to, I don’t think they had only just sold out at that exact moment.

Instead, I think they either sold out sometime before I had even reached that point, or indeed the site crashed.

Either way I am left with no Newcastle United season tickets. Very disappointed to say the least, never mind what I am going to tell the kids…

So near and yet so far, it kind of sums up my overall experience as a Newcastle fan.

When I boycotted and packed in the season tickets to try and help get rid of Mike Ashley, I knew that if in the future we did indeed get rid of him, then so many others, not just us, would be desperate to get back in to St James Park.

However, whilst I fully applaud pretty much everything the new Newcastle United owners have done so far.

I’m afraid this was a total shambles this morning.

To have so many Newcastle fans have their hopes built up on potentially getting a season ticket, at the very least there should be a proper fit for purpose ticketing site to deal with whatever happens.

Fans should at least be met with a message saying sorry but tickets now sold out…not a ‘site down for maintenance’ and you don’t have a clue as to what has happened.

Personally, if indeed there were only 1,000 or so that went on sale, I don’t think they should have even bothered.

Giving false hope to so many and then this added shambles of going in the queue and the above happening.

You are left in no man’s land as well because pointless logging out and back in as you will be 30,000+ in the queue. So you are left just staring at the screen hoping the maintenance notice will change and you are able to buy.

I did ring the ticket office just to ask / double check what had happened, I was number 50+ in the queue…and after 25 minutes or so I just gave up on that as well.

I have just checked and there is no update on the Newcastle United website, nor on the club’s Twitter etc.

In reality though, the Newcastle United season tickets that went on sale are long gone.

Success on and off the pitch, bringing in players etc etc is of course far more important than whether my kids and myself end up with a season ticket or not.

However, as we strive for excellence throughout the club, this needs to be extended to having a fit for purpose ticketing site and not as though the Newcastle United owners didn’t realise there would be a ‘fair bit’ of interest in the sale of Newcastle United season tickets this morning.

(***The club have put out a message (at almost exact same time as this article went up) confirming all the Newcastle United season tickets that were up for grabs have indeed all been sold, though no mention of the many fans who had problems)

(****I don’t go on the comments section and so I have asked The Mag to add this bit, having seen some of the comments. When I refer to today’s season ticket sale having been a ‘shambles’, it is for two main reasons…yes, demand was always going to exceed supply so it was never going to be a case of everybody happy and getting a season tickets BUT putting 1,000 on sale was always going to have far more negatives than positives, far better to just add the 1,000 to the match by match tickets each game rather than have tens of thousands of NUFC fans chasing the handful of Charlie and the Chocolate Factory Golden Tickets. Then the biggest reason for it being a shambles was that for so many fans the ticketing site was found not fit for purpose, people like myself getting a place in the queue high enough to get tickets, only for a glitch in the site sending me (and many others) to a maintenance message rather than a place where I could then choose and pay for season tickers, with no way of getting back to where I was – front of queue and set to go onto ticketing site.)