The new Newcastle United owners made an interesting announcement on Monday night.

With fans feverishly awaiting the official unveiling of Sven Botman…

Instead it was an official announcement of the new NUFC sleeve sponsor.

An official announcement by the club on Monday night making public a deal with noon.com.

It is described as the ‘Middle East’s leading online shopping destination’ in the official club announcement (see below).

Football finance expert Kieran Maguire was quick to give some insight into how much he understands the deal is worth for the new season (we contacted Kieran and he confirmed that he had been given this info from an industry insider in the commercial / sponsorship sector):

Kieran Maguire also pointing out the identity of the owners of noon.com: 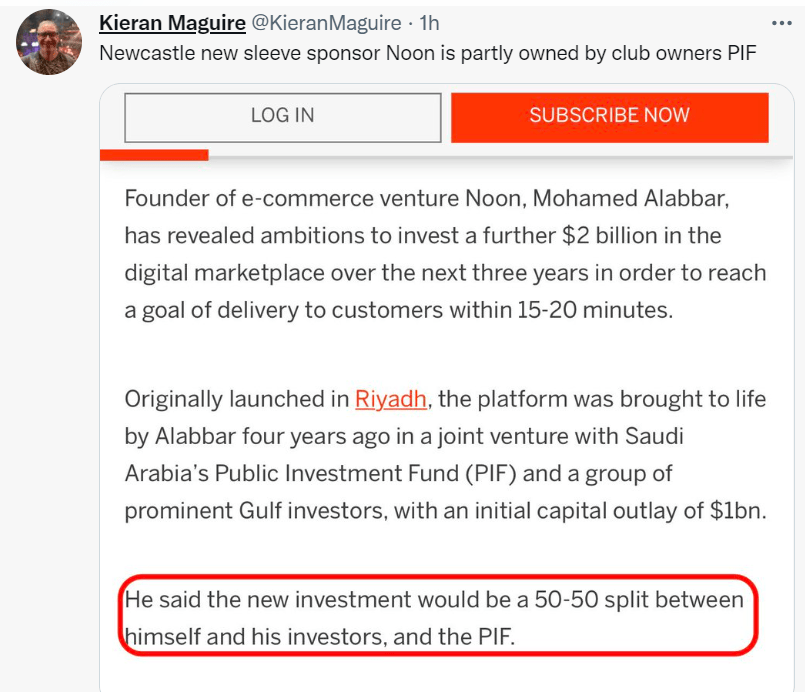 I had also already found the same info when reading up on the AGSIW site:

‘The PIF likewise owns 50% of the shares of noon, the Riyadh-based e-commerce marketplace and Middle Eastern competitor of Amazon.’

It looks to me as though this is surely for the Newcastle United owners, the first testing of the ‘Related party transactions’ rules, which the NUFC takeover sparked.

The Premier League introducing the new rules on 14 December 2021, which require all clubs to prove that their commercial deals with associated parties, the ‘related party transactions’ represent ‘fair market value’ (FMV).

At the time, it was announced that the Premier League approval process would require clubs to submit evidence to support their ‘fair market value’ assessments. The board of the Premier League to then be advised by an ‘independent assessor’ when judging each deal.

The Premier League also announced that a databank would be set up of all previous commercial transactions entered into by PL clubs, that information then used to help make decisions on future ‘related party transactions’ that clubs wanted to enter into.

No mention in the Newcastle United press release of this Premier League scrutiny having taken place but presumably that has been the case before the club’s announcement. The money to be paid to NUFC passed as ‘fair market value’ by the Premier League I’m assuming.

I have had to laugh at some clowns who are trying to claim that there is some kind of subterfuge in terms of the Newcastle United owners trying to supposedly sneak this sponsorship through.

The Saudi PIF involvement in noon.com is not exactly a secret, their investment listed on the official Saudi Arabia PIF website:

Obviously the level of money paid for the sponsorship is one thing…but certainly noon.com becoming a sponsor of Newcastle United isn’t something that would be seen as unusual. As it is a good fit in terms of pushing that brand by using a link up with NUFC.

As shown by the fact that Manchester City announced a ‘regional partnership’ with noon.com in April 2021.

The partnership will provide the club with new ways to engage with fans in the Middle East, with supporters in the region able to pre-order all 2022/23 Newcastle United kits on noon.com with the option of personalisation.

The noon.com brand will be displayed on all team kits for the upcoming season, as well as having a presence on matchdays at St. James’ Park and across the club’s digital assets.

Ali Kafil-Hussain, chief of staff at noon.com, said: “We are extremely proud to become a key strategic partner of Newcastle United, one of the most famous clubs in world football.

“We look forward to working with Newcastle United as a club with a strong sense of community and a vibrant history.

“noon.com prioritises creating a sense of belonging among our communities: customers, sellers, business partners, and employees. We’re excited to work with the club to promote community spirit in the Middle East and beyond, and we look forward to future successes both on and off the field.”

noon.com is now an ecosystem of eight products and services, all developed to help empower and inspire a generation of diverse digital-first consumers and businesses.

It offers world-class customer service and tools to enable local businesses to expand their offerings online and support their growth and success in the region.

Dale Aitchison, head of commercial partnerships at Newcastle United, said: “noon.com is a hugely successful and influential brand in the Middle East and we are very pleased to team up to offer supporters in the region with new ways to engage with the club.

“One way we can achieve that is by creating a fast, efficient and effective way for fans in the region to order official Newcastle United merchandise, and we are delighted fans can utilise noon.com to proudly wear their kits for the new season.”