The Newcastle United owners have had an ‘interesting’ Wednesday.

Along with much of the rest of the football community, they have put out messages supporting Pride month 2022.

Some people in the replies (see below) claiming that these Tweets will have just been NUFC social media staff putting it out of their volition and without the knowledge / backing of the Newcastle United owners, something which most definitely won’t be the case, it will definitely have been okayed at the highest level.

The thing is, these tweets from the Newcastle United owners and the reaction / replies is pretty much an absolute repeat of what happened back in October 2021, when an official NUFC message was put out in support of Australian football player Josh Cavallo, who came out as gay.

Then the same again last month (May 2022) when teenage Blackpool player Jake Daniels also came out as gay.

The Newcastle United owners have absolutely agreed for these messages to go out as officially from our club. The same with any number of other tweets / messages that have gone out from official NUFC social media.

As you will see in the replies below, the club tweets have predictably attracted massive attention, Newcastle fans overwhelmingly supportive of the club message…whilst fans of other clubs, trolls, bots and so on, not quite reacting in the same way. 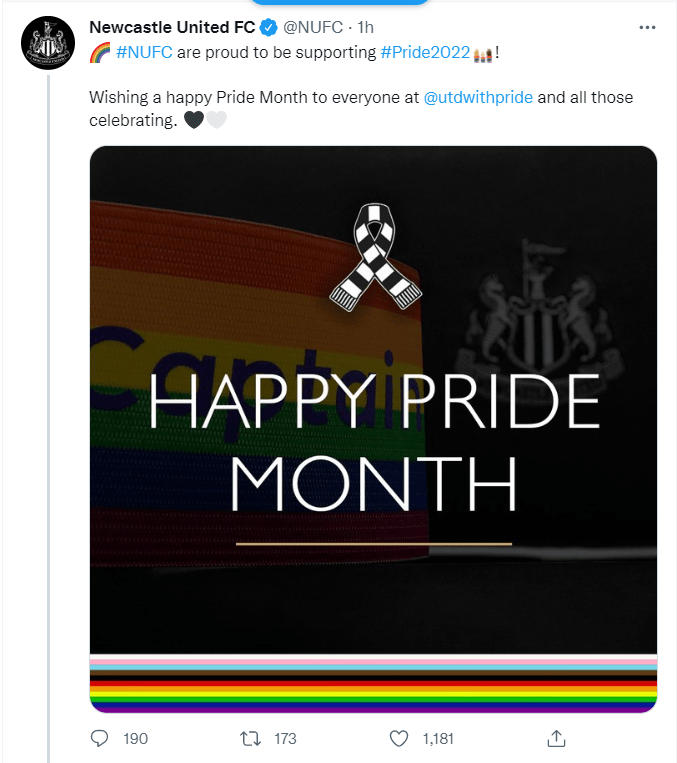 Some of the replies to the official NUFC Tweet…:

‘(Arsenal fan) What do your owners think of this subject?’

‘Guessing they fine with it considering they say what the official account tweets.’

‘(Liverpool fan) I hope you will hear this story of people who were before us hundreds of years ago doing such an act.’

‘Comments are gonna be a warzone.’

‘Do you know who your owners are?’

Fans of other teams are always commenting on here more than the own club we are United as one.

‘The West has animal ideas.’

‘(Chelsea fan) Screenshot this before the Saudi owners make them delete it.’

‘Time for the Saudi weirdos.’

‘Mohamed Bin Salman will not be pleased.’

‘(Liverpool fan) You disagree with the owners philosophy then. No need to play to the camera’s with this woke post.’

‘The Saudis do not celebrate with things like that, gross.’

‘There are many things to support and they really deserve support.. such as autism and cancer patients.. also the homeless and famine all deserve support.. so why support this disgusting group in which they contradict the nature of human beings?’

‘What are you doing oh my god we are the owners of this club Saudi Arabia does not support this filthy category you have to delete now!!’

‘(Arsenal fan) Gives normal gay people a whole month telling them their special when all they wanna be normal all while giving veterans who died for their country nothing. Makes sense.’

‘(Chelsea fan) How will your owners feel about this one.’

‘Who cares, views of owners don’t represent what the club is and who the fans are.’