In the early hours of Wednesday morning, The Mail reporting that after talks on Tuesday, an official announcement of the left-back making a permanent move to Tyneside was expected to be confirmed shortly.

The Aston Villa player then reported to be in Newcastle taking his medical.

Then early afternoon, Sky Sports revealing that the medical had been completed.

Now Matt Targett has been spotted outside St James Park, with Newcastle United fan Neil Davison getting a snap with the soon to be permanent NUFC signing… 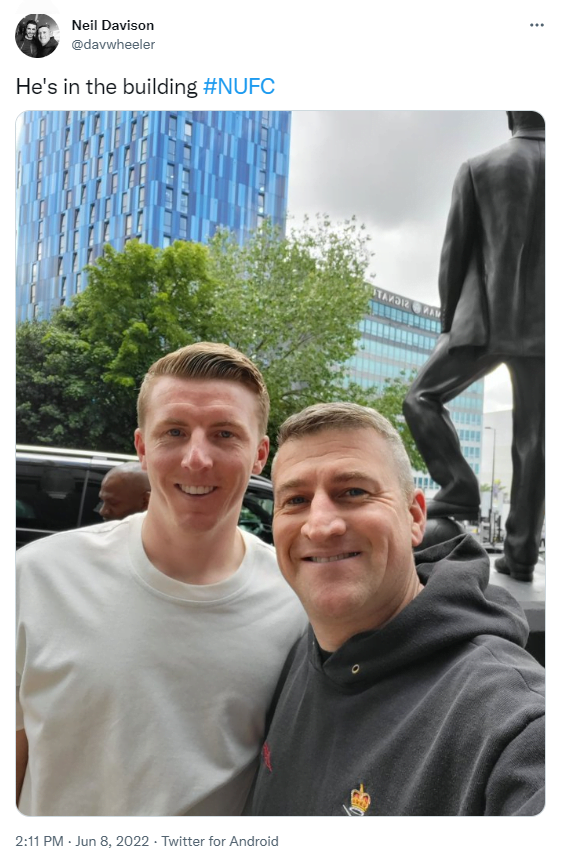 The permanent deal set to go ahead with a price tag of £12m, with Newcastle United having already paid around £3m for the defender’s excellent time at St James Park on loan in 2022.

Matt Targett was excellent after arriving on January deadline day, in the 16 Premier League matches that Matt Targett started, Newcastle picked up an amazing 31 points, with ten wins, one draw and five defeats. Only 18 points picked up in the other 22 PL games last season.

Indeed, Targett played every single minute he was allowed to, playing the full 90 minutes in all 16 games and only missing the one match as it was against Aston Villa.

Matt Targett made clear on a number of occasions during the season that he wanted to make the move permanent and after the final home match and win over Arsenal, he told NUFC TV:

“I think everyone knows what I want…but it’s up to the club.

“It is a massive project (under the new Newcastle United owners), an exciting project, and I’m sure everyone wants to be a part of it.

“I have loved every single minute of my time here.

“It has been an incredible place to play my football.

“I have loved every second of it.”