Steve Bruce was belatedly sacked by the new Newcastle United owners on 20 October 2021.

Newcastle fans breathing a huge sigh of relief as it was perfectly clear that whether under Mike Ashley or new ownership, Steve Bruce was relegating Newcastle United.

Over two months into the season and zero wins, the club rooted in the relegation zone and seemingly no hope.

Graeme Jones steadied the ship to an extent, adding two points in three games due to two draws (the other match a defeat to then league leaders Chelsea), to go with the three points from Steve Bruce in eight Premier League matches to start the season (as well as a home defeat to Burnley in the League Cup).

The thing is though, Newcastle United fans had long before seen the danger signs. Some incredible luck in a sizeable number of games in his two full NUFC seasons had seen Bruce pick up wins and points that were fortunate in the extreme.

No tactics going forward other than give the ball to Allan Saint-Maximin and hope he could do something.

Valerien Ismael was sacked by West Brom and replaced by Steve Bruce on 3 February 2022, with the Baggies in a play-off spot at the time. By then Eddie Howe had started to get things moving in the right direction slowly but surely, however, with only two wins for Newcastle in 21 PL games by the start of February, relegation still looked a near certainty.

The media were loving it, all the talk was of how hilarious it would be if / when Steve Bruce led West Brom to promotion and replace a relegated Newcastle United under Eddie Howe.

However, four months on after taking the West Brom job, small things such as facts / reality haven’t prevented Steve Bruce and at least one journalist putting a quite outrageous spin on recent tines…

This is part of what the Chief Sports Writer at The Mirror, Neil Moxley, has had to say about Steve Bruce, along with quotes from the West Brom manager – 6 June 2022:

EXCLUSIVE: Steve Bruce hits back at Newcastle fans as he takes credit for Saudi takeover

Steve Bruce admits: “It’s personal for me at West Brom.”

The Baggies chief is plotting his fifth Championship ­promotion. And following a chastening experience at Newcastle, this one means more. Bruce did not need too much by way of persuasion to return to management – and he did so in the Black Country in February with a point to prove.

He said: “I couldn’t finish my managerial career on what ­happened at Newcastle. I’d taken too much stick – I was being ridiculed. And there’s nothing worse. You can accept it if you have picked the wrong team. But I was being pulled to ­pieces because people were ­saying I couldn’t take a warm-up… that I had given the players too many days off.

“I knew what the team was ­doing on the pitch wasn’t what Newcastle United fans wanted. And I knew they were fed up. They wanted change. But I had a brief to keep the club in the Premier League. And we finished 12th and 13th in my two full seasons. I know we weren’t entertaining or attractive to watch, I’ll hold my hands up.

“We were pragmatic, defensive. I did what I had to do. Keeping Newcastle United in the Premier League was worth something. Would the sale to the new owners have gone ahead if the club was in the Championship? I’m not so sure.”

The Geordies’ loss could be the Baggies’ gain.

Bruce has a drive to succeed at a club where the pressure has been turned up a notch. This is the second year of their parachute payments, and the 61-year-old knows he needs to make it count. West Brom were heading around in circles under Valerien Ismael. His playing style was ­unloved by supporters and players alike.

Reaching the play-offs was a long shot when Bruce arrived. Five matches later, without a­ ­victory, and hope had been extinguished. Form picked up but it wasn’t enough. Sweeping changes are needed. And Bruce is ready.

“…the reality is that the club has been damaged. In the last 20 years it has ­either been in the Premier League or in the top four of the Championship. That’s a fantastic ­achievement. But we’ve been nowhere near that this year. So, we have a job on our hands.”

‘EXCLUSIVE: Steve Bruce hits back at Newcastle fans as he takes credit for Saudi takeover’

So Steve Bruce takes over a mid-table team from Rafa Benitez, then he (Bruce) is allowed by Mike Ashley to spend £160m on players (as reported by another Mirror journalist here on 3 September 2021) over the course of two years, then has Newcastle United heading for what looks certain relegation in his third season…yet takes credit for the takeover??? Surely at the point where they actually bought the club, Steve Bruce had helped create a situation that was the very worst possible, taking over a club mid-season that looked relegation certainties!!!

‘The Geordies’ loss could be the Baggies’ gain.’

Hmmm, well that hasn’t exactly proved to be the case so far…certainly no loss from Newcastle’s perspective and as for West Brom gaining…

‘Reaching the play-offs was a long shot when Bruce arrived.’

Yes, don’t let the truth get in the way of a good story.

When taking the West Brom job in February with the club in a play-off spot, Steve Bruce himself said he was was confident that he could get this squad of Baggies players into an automatic promotion spot.

Quite incredible, this is how the Championship table looked on 29 January 2022 after West Brom had lost 2-0 at Millwall, in what would prove to be Valerien Ismael’s final match (Steve Bruce appointed on 3 February 2022): 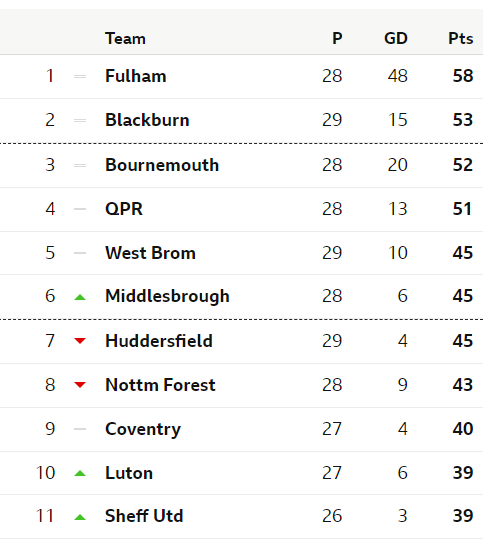 Then this is how the final Championship table looked… 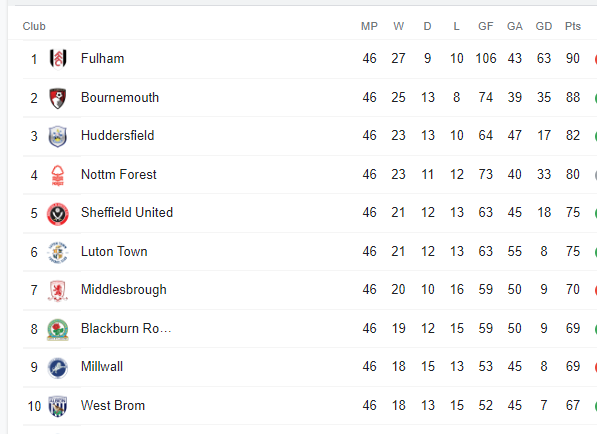 So after the previous manager’s final game / defeat, West Brom were fifth but ‘Reaching the play-offs was a long shot when Bruce arrived’…hilarious isn’t it, they didn’t need to be ‘reaching’ the play-offs, the Baggies were already in them! They simply had to stay where they were, or as Steve Bruce said he was confident of doing when he arrived, get automatic promotion instead.

What they did get was a drop down into mid-table, ending up tenth.

The 29 Championship matches under the the previous manager last season saw 12 wins, 9 draws and 8 defeats. A total of 45 points from 29 games at an average of 1.55 points per match.

What is really interesting and striking about the tables above, is that when the previous manager took charge of his last match, after that defeat West Brom were still ahead of Huddersfield, Forest, Sheffield United and Luton Town…yet all four of those clubs ended up finishing ABOVE Steve Bruce’s West Brom.

Put it this way, if back at the start of February, Steve Bruce had taken over any of those four clubs, does anybody honestly believe that they would have ended up as high as they finished at the end of the season?

The thing as well about these attempts to rewrite history at Newcastle United, there are so many things you can point to.

Steve Bruce signed Joelinton for a club record £40m and yet was clueless as to where to play him. So much so, that in Bruce’s final 30 Premier League games with Newcastle United, Joelinton was only named in the starting 11 on 16 occasions, amongst the subs on the other 14.

Steve Bruce spent £15m on Jamal Lewis in summer 2020 and yet in his final eight months at the club totally dropped him, Lewis not getting a single Premier League start after February 2021.

Steve Bruce brought in high wages and high profile winger Ryan Fraser, he only started nine of the 46 PL matches whilst Bruce was head coach at NUFC and not a single PL start after March 2021.

The list goes on and on…though as Newcastle fans we know all this already!