A football journalist has asked…’How many years it will take Newcastle to become Premier League contenders?’

An interesting question, to say the least.

I think most Newcastle United fans very much keeping their feet on the ground BUT obviously the new club ownership has opened up the realistic possibility of doing more than trying to survive in the Premier League, whilst spending as little as possible on and off the pitch. Which was pretty much Mike Ashley’s mission statement.

Anyway, writing for the likes of Eurosport and FiveThirtyEight, football writer Grace Robertson posing the question. 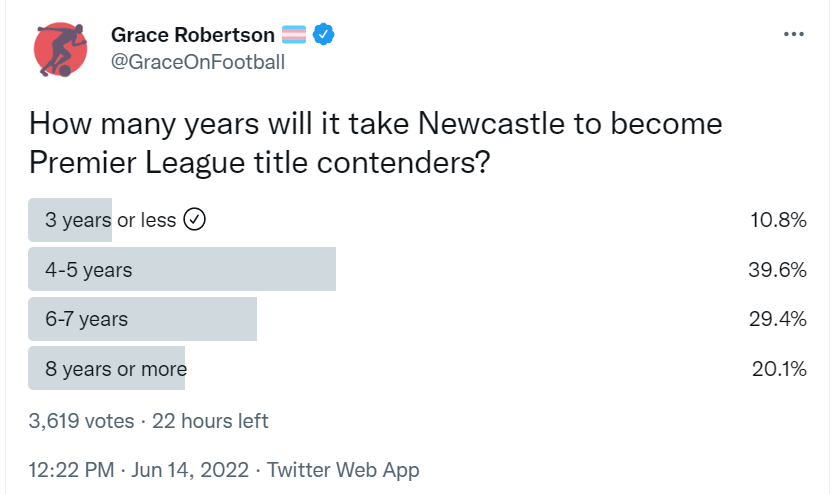 With 10.8% believing it will be within the next three years and 20.1% thinking eight years or more. Or playing with the stats once again, only one in five of those voting believing Newcastle won’t become title contenders sometime within the next seven seasons.

Of course, what does ‘title contender’ actually mean?

This is how the Premier League table ended this past season:

Becoming a ‘contender’ doesn’t mean you necessarily go on to win the title…but last season I would say there were only two contenders by the end of things. Although Chelsea were the early front runners before ending up 19 points off the top.

The season before Man Utd were runners up but 12 points behind Man City, not exactly contenders!

The second half of the season saw Newcastle United pick up 38 points from 19 matches, only Liverpool and Man City picking up more. You can’t take for granted of course that this can be easily repeated BUT it did illustrate what having a decent manager can do, with the know how of getting the best out of players.

‘Yeah but they weren’t being hit with FFP like we are… plus the level of Man City and Liverpool is so hard to reach Never-mind overtake.

I think it will take about 8 years to win the league but 3/4 years to go into the champions league regularly.’

‘People are thinking this is like instant oatmeal when it’s feasible that they muddle through like an Aston Villa currently.’

‘I don’t think Newcastle will be selling their best player any time soon.’

‘I had kind of assumed once they’re there, they’ll stay there.’

‘Long old time most likely, breaking the control of City is something a great team like Liverpool can barely do.’

‘The Saudis will be gone within 4 years and they’ll still be without a major trophy since the 50’s.’

‘This is obviously an evasive answer, but I think it might depend on how long Pep and Klopp stay at City and Liverpool.’

‘I think it’s possible in 3 years but they’re bound to make a mistake here or there so more like 4-5.’

‘Three or less imo, having money to splash every window is bound to work eventually.’

‘Dan ashworth means they have great strategy. They will be challenging for top 4 this season.’

‘It’s not a number in a vacuum. We saw how long it took for City to become Premier League title contenders, but this was aided by Chelsea’s rollercoaster from also-rans to title winners. Newcastle will also have to be slightly more clever with how they use their unlimited wealth.’

‘4-5 years with the right investment and manager. Given how average the rest of the league are apart from the top 2.’

‘3 years. One season with Howe. Then they’ll start looking for the Pochettinos and Contes and Tuchels.’

‘I dont care. We wanted a club that tried, we have one now. If we get to that level its fantastic icing on the cake but we now have a cake at least!’

‘3 years or less. (Man) United, Arsenal and Spurs were all top 4 contenders despite having multiple disasters this season. A normal team with a couple of Goodens will do very well imo.’