Eddie Howe – Ultimately there is a sense of injustice

Eddie Howe robbed for manager of the meason?

Brentford, Man City, Newcastle United and Crystal Palace fans, will all feel to greater or lesser extents that their manager was the deserved winner.

Each team experiencing a positive outcome to a tumultuous, entertaining campaign this season.

Jurgen Klopp was named the 2021/22 Manager of the Season and it is hard not to be biased, as Eddie Howe has been a revelation at Newcastle United. Bringing passion, intelligence and a stoic demeanour not seen at the club since Sir Bobby Robson.

Ultimately there is a sense of injustice, with the lack of recognition Eddie has received for the relegation ‘great escape’ this season.

Ask yourself this question, did Liverpool outperform expectations this season under Klopp in the league?

Edward John Frank Howe, aged 44. Rose to prominence as a manager at Bournemouth where he took over as caretaker manager from Jimmy Quinn, who was sacked on 31 December 2008.

Howe’s first two games in charge as caretaker manager were away defeats. Nevertheless, he was hired as the permanent manager of the club in January 2009 and stop me if this sounds familiar – pushed Bournemouth out of the relegation zone despite a 17 point deficit.

The following season, despite a transfer embargo, Bournemouth defied expectations and secured promotion to League One.

After an unsuccessful two year stint at Burnley, Eddie Howe was brought back to Bournemouth in 2012. Eddie went on a managerial rampage, securing promotion to the Championship in 2013 and the Premier League in 2015.

In April 2015, Howe added further accolades, being selected as the EFL Manager of the Decade at the Football League Awards.

After promotion, for four seasons Eddie Howe led Bournemouth to mid-table finishes in the Premier League, showcasing an exciting attacking brand of football that pundits and mutual fans couldn’t help but take notice of.

An unlucky last day relegation in 2019/2020 saw Eddie Howe then leave Bournemouth by mutual consent and took time out. Eddie analysing and absorbing a large amount of football as he travelled in England and overseas to learn from spending time with other managers.

Newcastle started the first half of the season just about as badly as any team could. Losing winnable games, looking like a team devoid of creativity, ideas and tactically inept in the premier league.

Starting October on three points and also having crashed out of the league cup via penalties at home to Burnley.

The 7th October 2021 saw Mike Ashley finally hand over the keys to new owners and after just one further match, Steve Bruce was removed. Newcastle remaining on three points at the bottom of the premier league.

Another two weeks pass and Eddie Howe is appointed as Newcastle Manager. With Newcastle on a measly five points, a monumental task is ahead of him.

Howe changes tactics almost immediately from Steve Bruce’s ultra-defensive 5-4-1 tactics. To a more balanced 4-3-3 with Joelinton (a revelation under Howe) dropped into midfield.

Newcastle finally register our first win against Burnley on 4th December 2021 and the rest is, as they say, history.

Many people will point to the £85+ million spent by our new ownership as the major contributor to our turn in form this past season.

I disagree, the combination of new ownership and the appointment of Eddie Howe injected life and joy into a club that had dealt with so much under Mike Ashley, that almost all hope was lost.

Now, let’s put things in perspective – No side in Premier League history has stayed up after failing to win any of their opening 14 matches.

At the same time, let’s not diminish the amazing job that Viera and Thomas Frank have done this season at Palace and Brentford. They deserve the accolades they received for fine performances in the top flight this season.

By way of comparison let’s see just how good these three managerial seasons stack up (PPG = Points Per Game, whilst also including allocating points to cup results): 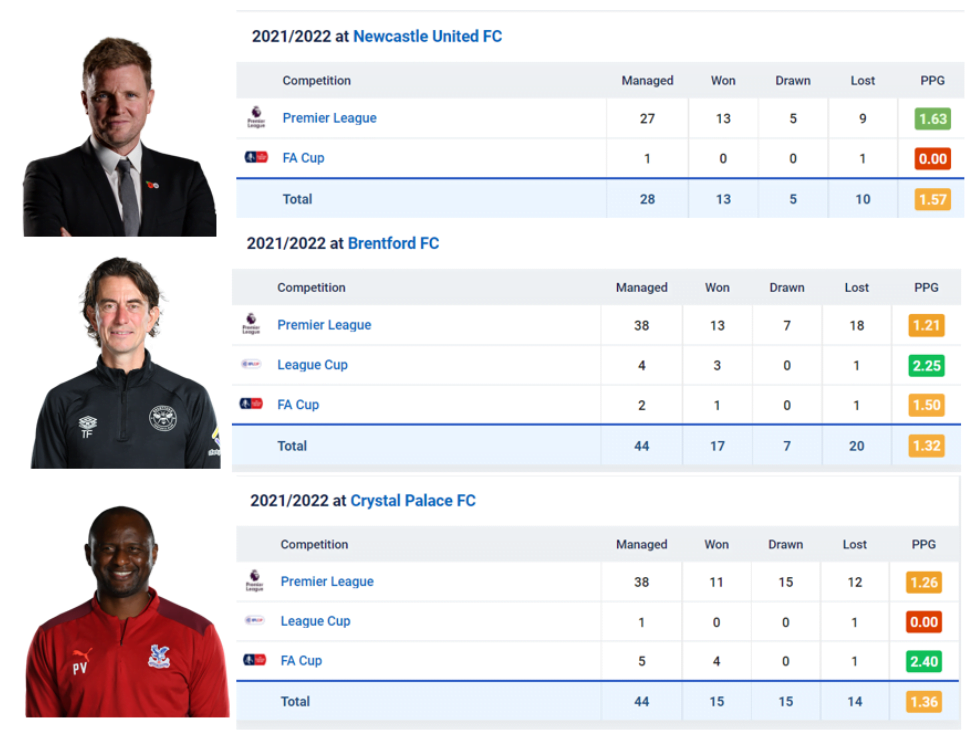 Even with just under three quarters of a season under his belt after inheriting such a difficult situation mid-season, Eddie Howe is head and shoulders above the other two. Irrespective of transfer fees. Let alone where the clubs were at the beginning of November.

Take the domestic cups out of it and Eddie averaged around 0.4 points more per game more than both Patrick and Thomas.

Even the most passionate Brentford and Palace fans would admit that Eddie has far exceeded expectations. With most pundits and fans alike believing we would be a certainty for relegation at the turn of the year.

Another honourable mention…a manager not even considered a finalist in the manager of the season contest was Conte, you could make an argument that he was as deserving as any manager for where he managed to finish the season with that Tottenham squad. 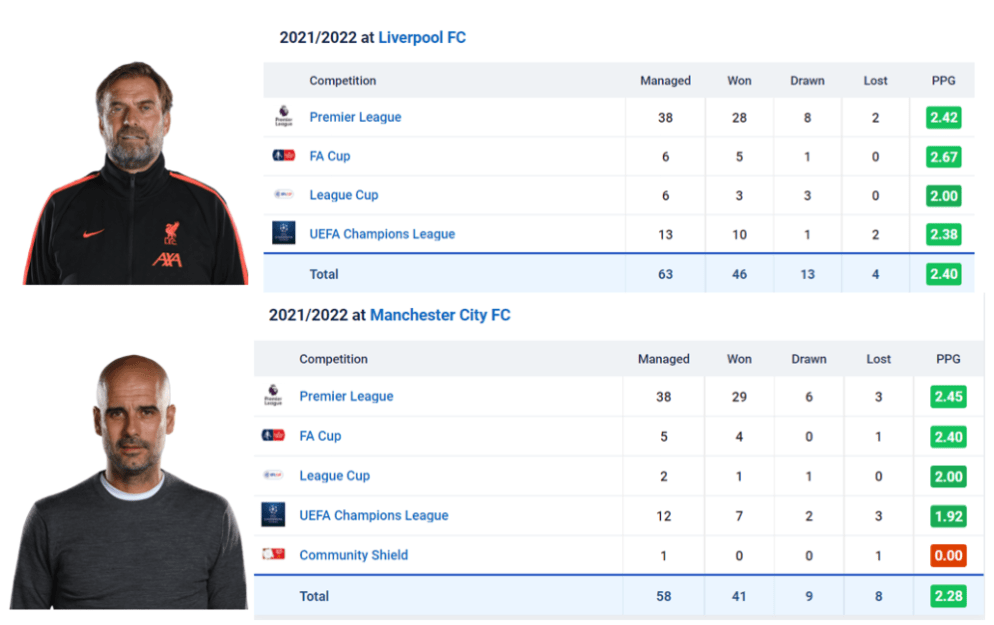 Jurgen Klopp and Pep Guardiola are entirely different animals. Both teams had incredible seasons and pushed each other for the title to the final day.

Both squads also share some of the best players in the world. They spend and recruit heavily, prior to each season. Luring top talent from Europe’s top five leagues

Both were expected to be contending for the title. That isn’t enough to guarantee a manger of the season, you have to be exceptional.

I am biased…but for me Eddie Howe deserved the honour of Manager of the Season.

Liverpool didn’t win the league, Manchester City were expected to win the league (having spent approx £1.4 billion in transfer fees in the last 10 seasons)

Crystal Palace and Brentford did not come close to the winning percentage or points per game that Newcastle boasted this season under Eddie Howe. Only Brentford and Thomas Frank in my opinion also having a realistic claim for the award.

Not only did Eddie Howe keep Newcastle up but we also finished a comfortable 11th. No manager was under more pressure post-January transfer window and Eddie accomplished the impossible with style.

Take a bow Eddie Howe. For us Newcastle fans you are a clear winner of manager of the season and deserve far more credit than you have received.

With Dan Ashworth in our corner for transfers this window, the future is the brightest it has been in around 20 years!

What are your thoughts – who was your manager of the season? Frank? Vieira? Klopp? Guardiola? Was Eddie Howe robbed?