Monday 16 May 2022 was a statement of intent moment for Eddie Howe.

It wasn’t so much the fact that for the first time his NUFC side beat a top / big six club, it was how they did it.

From the first whistle, Newcastle United completely dominated Arsenal in every department, it ended up 2-0 but could and should have easily been four or five goals the difference, such was the home side’s superiority.

The thing is as well, this was a game where ironically, Arsenal had absolutely everything to play for and Newcastle United nothing at all, in terms of the result massively affecting the fortunes of the two clubs directly. A win for Arsenal would have led them to qualifying for the Champions League, whereas it was a case of just pride and playing for their personal futures that weighed on the Newcastle players.

After the defeat, Mikel Arteta was brutally honest about what he had just watched…

“Normally I can sit here and defend what we have done…but today it is not easy.

“Newcastle were one hundred times better than us in every department, from the beginning to the end.

“It is hard to accept but that is the reality of what happened today on that pitch.

“We knew [what was at stake] but we didn’t cope with it. We didn’t compete, we never even got into the game. We were putting ourselves in trouble time after time.

“We lost every duel. Every aspect of the game we were second best and Newcastle deserved to win the match, probably by a bigger margin as well.”

It was a game where due to a number of factors, Eddie Howe could finally get his team playing the way he ideally wanted them to. Relegation fears a distant memory, Callum Wilson finally able to come back into the starting eleven, a more winnable matches after having to play arguably the two best teams in the world who were both going for the title.

So Eddie Howe sent his team out to press high from the first whistle and from very early on, you could see Arsenal struggling to cope. Newcastle pressed and pressed when out of possession, then passed and passed when they had the ball.

After the match Eddie Howe was understandably buoyant when reflecting (see below) on the game and I think in many ways, that Arsenal match was almost an audition for the Newcastle United players, to see which of them have a future at St James Park, in terms of having what it takes to play the way the head coach wants to, moving forward.

After inheriting such a shocking shambles thanks to Ashley and Bruce, Eddie Howe had no chance but to be pragmatic in the short-term. The head coach showing just how versatile he can be, when finding a system that absolutely smashed it in terms of getting the results needed to not only dodge relegation…but also to incredibly deliver 38 points in the final 19 Premier League games, more points than every other club apart from Man City and Liverpool. It was largely a defensive system that had Chris Wood leading the defending from the front, with often at times the opposition largely dictating possession and territory BUT Newcastle having a very definite plan and focus when in possession themselves. 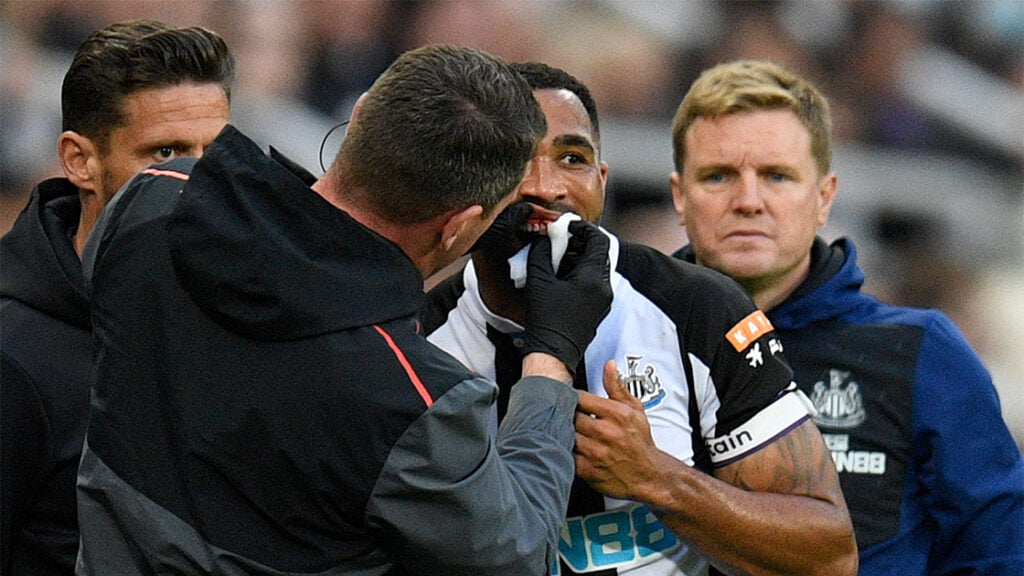 Against Arsenal though the shackles were off and Eddie Howe released the hounds, encouraging his team to dominate the Gunners and express themselves.

At the back, Schar and Burn were excellent. No problems defensively and with both comfortable on the ball, they were key to moving the ball around and at times taking turns to step out of defence with the ball, to help NUFC get through the Arsenal lines.

Bruno and Joelinton were really enjoying themselves in midfield, showing their technical quality in terms of always happy to take possession even when under pressure, as well as dominating their Arsenal midfield counterparts overall as well.

Callum Wilson was excellent, relishing having a role at the top of such an attacking / pressing side. Whilst for Allan Saint-Maximin, with Newcastle United getting on the front foot it meant that he was getting the ball repeatedly in the opposition half and running forward. As opposed to so often previously tending to get the ball with his back to goal deep in Newcastle’s half. No surprise that he thrived with this platform against Arsenal, having his best game for months.

As for Sean Longstaff and Miguel Almiron, they arguably were the biggest winners of all on the night.

Not the best performers BUT winners in terms of potentially convincing Eddie Howe that they do have a part to play moving forward. Maybe not as automatic first choices but certainly possibly in the core group of 16-18 players that Howe could look to use next season and potentially beyond. The high press tactics absolutely suiting the pair of them, they have great engines and it totally suits them chasing and harrying the opposition, rather than sitting deep and defensively minded. 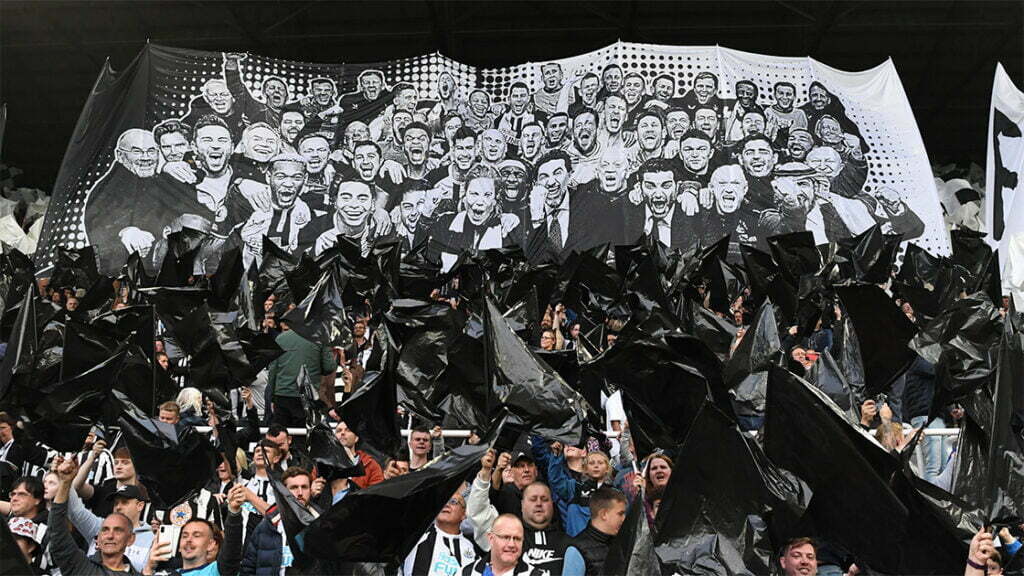 It was a night where nobody in black and white had a bad game but maybe it did highlight the weaker aspects of certain players’ games. It might be harsh but if Newcastle United are to progress then Eddie Howe will be ruthless where he needs to be.

Emil Krafth has had a canny run and after his limitations were shown up defensively by Man City and Liverpool, against Arsenal we were reminded of just how good Kieran Trippier is going forward. Krafth has made a great case for staying as a squad player next season with money needing to be spent in other areas but Trippier obviously on another level and will be massive next season, especially if Eddie Howe has the team getting on the front foot and using a regular high press.

Many Newcastle fans have been surprised at widespread reports of Eddie Howe considering other left-backs, rather than just focusing on making Matt Targett a permanent signing. Those reports claiming Howe favouring possibly a left-back who can give more going forward, Targett isn’t poor going forward but obviously far better in defence. If Eddie Howe sees his plan including getting full-backs high up the pitch and doing plenty in attack, then maybe a different alternative to Targett may be needed…

As for Martin Dubravka, he didn’t have much to do on the night against Arsenal. However, once again we have had plenty of talk about a new keeper potentially being targeted, with a major factor a goalkeeper with better distribution than Dubravka. A bit harsh maybe when in the final 20 PL games, if you take out Spurs and Man City away, only 12 goals conceded in the other 18 matches. Once more though, Eddie Howe will be ruthless wherever he thinks it is necessary.

For other Newcastle United players, the writing is on the wall.

Lascelles came on for an injured Schar against Arsenal and did ok defensively. However, his obvious limitations on the ball surely mean he will be leaving for first team football elsewhere this summer. If you are wanting your central defenders playing football, you need the likes of Burn, Schar and probably at least one new arrival this summer who is comfortable in possession.

The same with others such as Isaac Hayden, a good servant to the club but just like Lascelles, his limitations on the ball mean that the likes of Bruno and Joelinton have taken things to another level.

Jonjo Shelvey is an interesting one, obviously very comfortable on the ball BUT to hopefully play this front foot high pressing style next season, Shelvey just can’t do it physically. Maybe though he will still keep a squad place next season and be used as a 20 or 30 minutes sub, so that his lack of pace and stamina isn’t such a problem.

A word also on 19 year old Elliot Anderson. He will almost certainly be loaned out again this coming season to get regular football, hopefully at Championship level. If Eddie Howe is going with a more attacking high press system moving forward, then that could prove ideal when in a year of two Anderson starts to get chances at NUFC first team level.

“A brilliant all round performance.

“We played with intensity and never let up, approaching the game in a brilliant manner and we did the Premier League proud tonight.

“The one thing missing was that we hadn’t beaten a top six team and we deservedly beat them (tonight).

“We wanted to press Arsenal and not let them settle into a rhythm, but also for the first time in recent performances, we saw a team that could be comfortable on the ball and be creative.

“Arsenal competed well and fought well but they left spaces for us and we exploited them.

“Callum Wilson worked incredibly hard to get back to full fitness and he deserves all the accolades tonight.

“It has been a brilliant thing to be part of (since arriving at Newcastle United), and we have done it through team spirit and unity.

“We will remain very calm in this moment because it is a brilliant win…but that’s all it is.

“We have to work to improve in the summer.

“We are a massive club with big ambitions but my job is to focus on how we do it, rather than talk.

“This was a brilliant way for us to sign off here (with seven wins from final eight games at St James Park).

“I was very, very pleased with the performance and I think it is our best performance, by some distance, since I have been at the club.

“I am very, very proud to be connected with this club.

“I have an incredible debt of thanks to the supporters for how they have handled what was a very difficult situation this year.

“When you think back to (losing in the FA Cup to) Cambridge and (drawing 1-1 at home to) Watford, how they reacted after those games was absolutely magnificent.

“I think that has paved the way for us to build some confidence and some unity and spirit, to go on the brilliant run that we have been on.

“The support tonight was absolutely incredible.

“The atmosphere around the stadium was something I have not really experienced before.

“It is just a big thank you to them.”