The past week has seen Bruno Guimaraes pick up his latest two caps for Brazil.

The Newcastle United star coming off the subs bench against both South Korea and Japan, helping his country to two away friendly wins.

Those two latest victories mean that so far in his eight appearances for Brazil, it is eight wins out of eight for Bruno Guimaraes.

While looking a certainty to make the final squad for the Qatar World Cup finals, when it comes to trying to become a regular starter Bruno couldn’t be doing much more to force his way into contention, as very impressively he has managed four assists and a goal in his last 129 minutes of action for Brazil.

Saturday (11 June) and Brazil scheduled to perhaps get revenge for that sole defeat in the last few years, due to play Argentina in a massive prestige friendly for the Melbourne cricket ground in Australia.

However, that game called off due to Argentina refusing to travel…

“Regrettably, event organisers have been informed by Pitch, the Superclasico June 11 2022 match agent, that contrary to their prior agreement and commitment to do so, Argentina are no longer prepared to travel to Australia for the match against Brazil.

“I think they owe Australian football fans an explanation because they haven’t provided an acceptable explanation to the promoter.

“I know Brazil is very upset.

“It’s really impacting their preparation for the World Cup.

“It’s a game that would have been extremely popular here in Melbourne.

“I welcome the comments by the promoter overnight that all the fans will receive a full refund.”

With obviously Bruno Guimaraes hoping for more time on the pitch to impress, with his eyes on the ultimate prize of November and December in Qatar, the Newcastle midfielder could have done with the chance of playing again.

However, on the flipside, it is a bonus for Newcastle United having Bruno completing his international commitments early.

Whilst for the player himself, he is looking forward to the chance of a welcome holiday…

“Another preparation step (for the Qatar World Cup finals) completed.

“Now it’s time to recharge, enjoy the holidays and the family, and come back even stronger.” 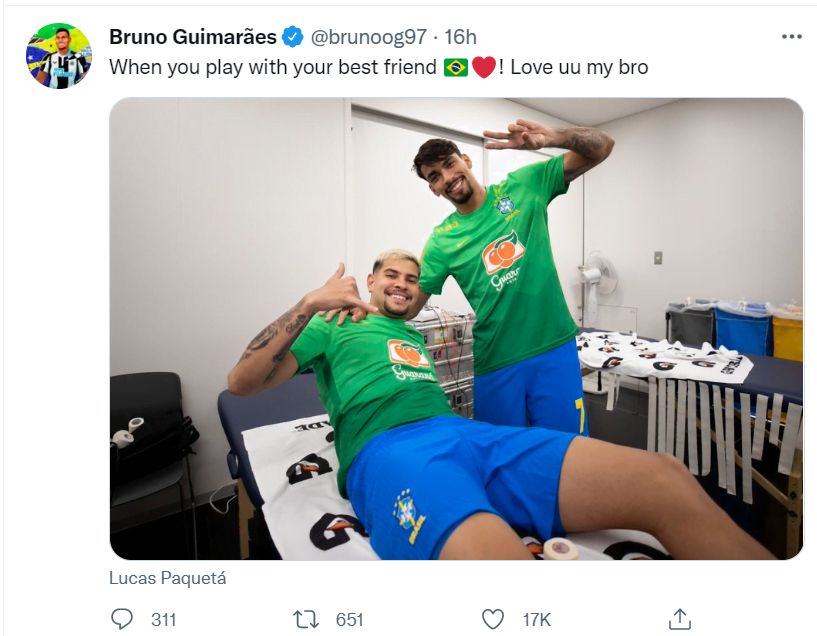 However, as things stand, Brazil have only one more warm up match scheduled before they play in those World Cup finals in November and December later this year.

Ironically, Brazil are due to play at home against Argentina on 22 September. This game is a fixture still to be completed from their World Cup qualifying group, though it will have zero affect now on qualification or indeed placings in the South American qualifying group. With this one outstanding match left to play in the group, Brazil are top with 45 points, then Argentina with 39, then Uruguay way back with 28 points in third. All other countries having fulfilled their fixtures.