For Tottenham and Arsenal fans, it is now all eyes on Newcastle United.

The two North London clubs looking for salvation from Eddie Howe and his players as their derby battle heads into the final week of the season.

For Tottenham and Arsenal, Thursday night could / would have been decisive.

The two clubs meeting at the Tottenham Hotspur stadium and a win for the visitors would have made them mathematically sure of a Champions League place, whilst Spurs heading for a Europa League campaign next season.

Instead, Mikel Arteta’s team crumbled under the pressure, Harry Kane scoring twice within the opening 37 minutes and in between those goals, Rob Holding managing to get himself sent off.

When ten man Arsenal then conceded a third to Son only two minutes after the break, it was truly game over for the visitors.

That Tottenham and Arsenal derby result leaves the Premier League table looking like this on Thursday morning: 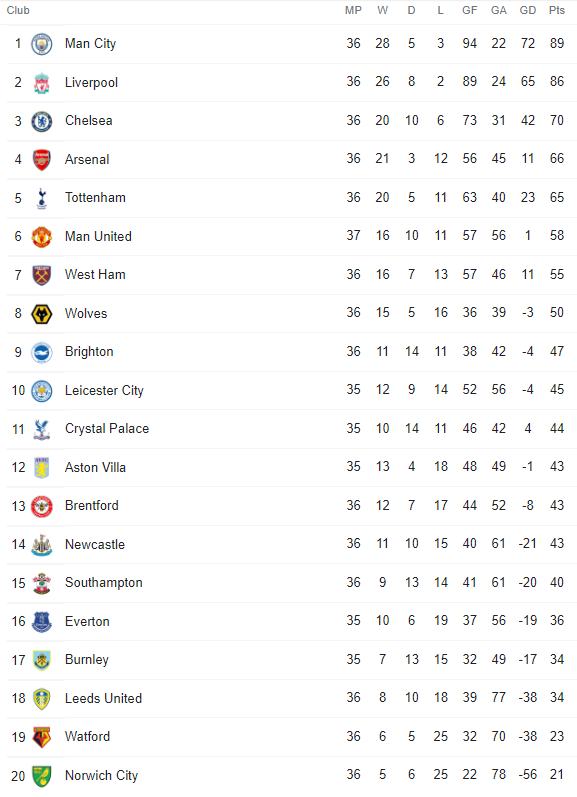 As you can see, everything so finely balanced for Tottenham and Arsenal, two games each left to play, the Gunners only a point ahead but Spurs with a 12 goals advantage when it comes to GD.

Any slip by Arsenal now looking all but certain to be punished with failure to qualify for the Champions League, with instead their fiercest enemy set to finish top four if given the opportunity.

Tottenham are home to Burnley at noon on Sunday and a win would put them two points clear in fourth, as they face rock bottom Norwich away on the final day of the season, it is very difficult to see them not picking up all six points from their last two matches.

As for Arsenal, it is a trip to Newcastle United on Monday night and a match that will surely decide their fate.

A victory at St James Park would mean they’d only need to beat Everton at home on the final day of the season to guarantee Champions League football ahead of Tottenham.

It is literally on a knife edge and after Thursday’s match, the bookies make both Tottenham and Arsenal 5/6 to finish in the top four, they can’t split them.

For Newcastle fans it is a last home match of the season on Monday night and since Eddie Howe arrived six months ago, only Man City and Liverpool have won in the Premier League at St James Park.

Howe and his players, along with the NUFC owners and fans, will all be desperate to end the home campaign on a high. A win for NUFC would also remarkably, considering the appalling start to the season and the mess Ashley and Bruce left behind, mean the highest PL home points total for Newcastle United in a decade! A win would make it 30 points picked up at St James Park, only one other time in a PL season starting under Mike Ashley, had Newcastle managed that many points at home. A victory would make it seven from the last eight of the season at SJP for Eddie Howe.

All three clubs will also be helping to decide the relegation outcome, as both Tottenham and Newcastle to play Burnley, whilst Arsenal face Everton.