We are getting a much better idea of which Premier League clubs Newcastle United are going to be up against in the 2022/23 season.

Norwich and Watford are already relegated and the other demoted club is set to be one of Leeds, Burnley, or Everton.

Whilst Fulham and Bournemouth have been promoted, with the play-off success to come from one of Luton, Forest, Huddersfield or Sheffield United.

This is the Premier League table on Tuesday: 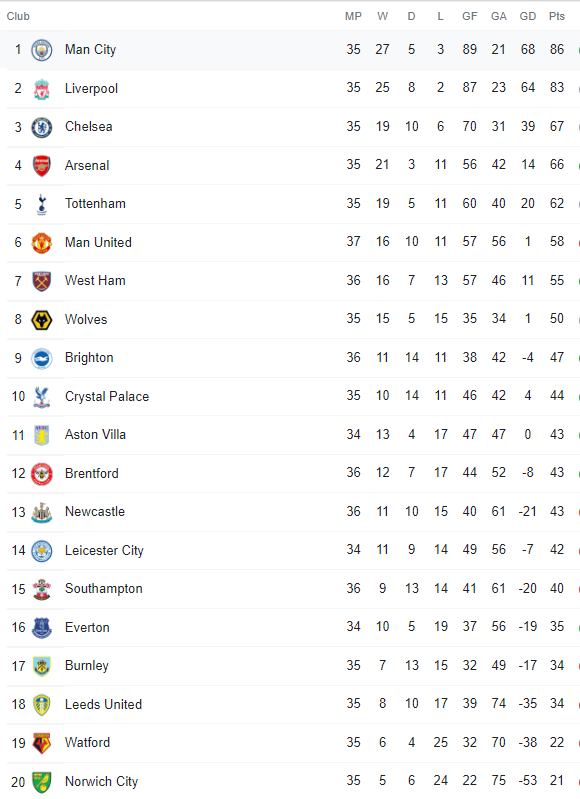 So we are looking next season at Newcastle United and the other 14 Premier League clubs currently 1-15, then two of those currently 16-18, plus the three that will come up.

When I look at next season, I believe the challenge is to try and finish above five particular Premier League clubs:

Currently 11th, the last two seasons have seen them finish 11th and 17th (promoted the season before).

Nothing is for sure of course BUT just as we have the top / ‘big’ six, I think these five Premier League clubs are the most likely next five, after the usual suspects currently in the top six.

These five Premier League clubs listed above, are the ones who I see Newcastle United currently needing to compete with next season and beyond, as NUFC attempt to play catch up.

As for why these five, I think a combination of performance in recent seasons, willingness of owners to try and fund success / progress, fanbases, quality of current squads and so on, are the factors I would put forward. Although not all of these factors apply to all of the five clubs.

You see the league finishes in particular for those first three clubs (including where in the Premier League they currently are) and 6th and 7th for West Ham these past two seasons, Wolves with an 8th and 7th twice in the past four campaigns, then Leicester two 5th place finishes in the last three seasons. All of them showing ambition and all three having played in Europe and the clubs / owners keen to do so again.

Aston Villa may not have those kind of league finishes but the club’s owners have spent serious money. Same with Everton, a lot of that cash wasted but it looks like they are going to avoid relegation and their overall profile the last couple of decades has been one of generally competing not far below the usual suspects.

Other clubs may establish themselves in times and indeed the likes of Southampton, Palace and Brighton could perhaps prove troublesome next season / in the short-term. However, I do see the five identified above as the ones most likely to stand in Newcastle United’s way.

With the advantages and resources they have, the top / ‘big’ six will be a tough nut to crack, although I don’t think it is impossible for another club to make that climb next season and get ahead of one or more of them, after all, Leicester finished the last two seasons in fifth and threw away fourth place late on both times.

We can’t take results against anybody for granted of course, including those coming up, however, if we can take on and finish ahead of all but one or two of West Ham, Everton, Leicester, Wolves and Villa next season, then I think Newcastle United will be doing ok.

Finish above all five and I think you are more or less guaranteed to be looking at top eight and then looking at the possibility of one or more of the top six to falter as well.

Every positive move the new owners and Eddie Howe make, tips the scales a little bit more in our favour. How quickly NUFC can progress (if at all…) remains to be seen but at least after a decade and a half of zero ambition under Mike Ashley, every transfer window and every season, Newcastle United are finally looking to build bigger and better.