Only 14 days now until the Premier League season comes to an end.

Newcastle United visit Burnley on the final day of the season, a 4pm kick-off at Turf Moor on Sunday 22 May.

Before we get to that point, there is the last home game against Arsenal on Monday 16 May with an 8pm kick-off and more immediately than that, Manchester City away this Sunday afternoon with a 4.30pm start.

Thanks to Eddie Howe’s spectacular recovery job, including 10 Premier League wins in a run of 14 matches, Newcastle United are thankfully playing the role of very interested spectators when it comes to the relegation battle, rather than one of the star turns involved in it.

However, as well as being interested observers, after Saturday’s results, it is even clearer that Newcastle United now have an absolutely clear role to play in who wins the title, who is relegated, plus who gets that essential fourth spot and Champions League qualification.

These are the results from yesterday and then how the Premier League table looks now, after those games were played:

This is how the Premier League table looks on Sunday morning: 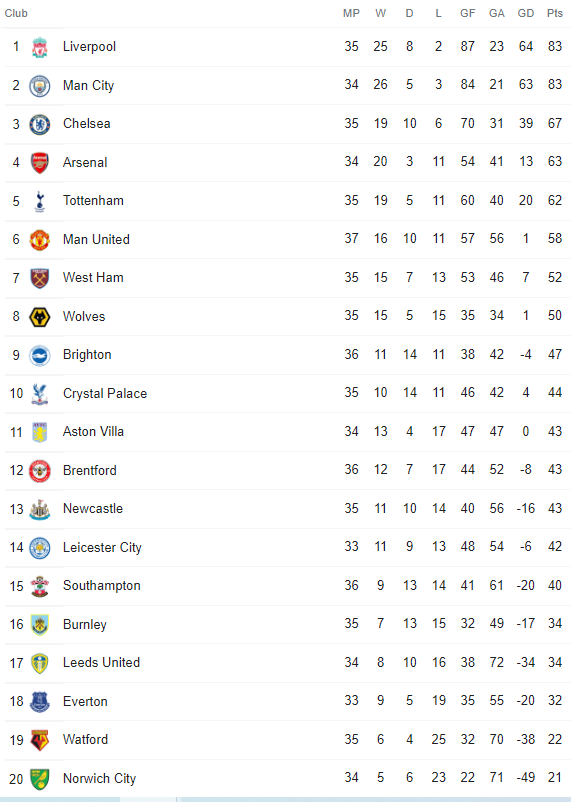 Today was already a massive match for Manchester City, up against Newcastle United.

However, with Liverpool only drawing at home to Spurs last night, this is surely now an opportunity for Man City to win the title with three games still left to go. If Guardiola’s team get the victory and move three points clear, I just can’t see any way that the scousers can come back. Conversely, if Eddie Howe’s team can pull off a shock win against a team that looked shattered mentally and physically after throwing away their Champions League chances on Wednesday, then Liverpool would be top of the league still on goal difference and surely then favourites to stay there. A draw today at the Etihad and it would be back to that one point small lead for Man City.

A very interesting question, if Newcastle did avoid defeat today, it would be the first time for how long that both Man City AND Liverpool had failed to win in a round of games (apart from when playing each other)?

Manchester United’s hammering at Brighton, has meant they are now mathematically impossibilities to finish top four, so it is now a straight fight surely between the two North London rivals. Although still possible as an outside chance that it could be three cockney clubs fighting it out for two places, after Chelsea collapsed from 2-0 up to only draw 2-2 yesterday, Wolves scoring their second in the seventh minute of added time.

However, we are talking almost certainly about Arsenal v Tottenham for fourth spot.

The Gunners one point ahead and they play Leeds at home today.

You then have Tottenham v Arsenal on Thursday night and then Tottenham v Burnley on Sunday, which will mean a far clearer picture by the night of Monday 16 May, when it is Newcastle at home to Arsenal, with to follow only the final day games for the two cockney clubs (Arsenal v Everton, Norwich v Tottenham).

Then finally, we come to the relegation battle…

Palace completed Watford’s relegation yesterday, a 1-0 defeat sending the Hornets down with the Canaries.

That leaves the three way fight for the third relegation spot, Burnley currently 16th but a massive blow yesterday when losing 3-1 at home to Villa.

Leeds at Arsenal today and Everton at Leicester, Burnley desperately hoping they aren’t made to pay for their failure yesterday.

The remaining games for those three clubs after today are:

I think it would be a massive surprise to see the third relegation spot decided before the final day of the season. That Newcastle trip to Burnley looking like a game that could prove so pivotal in deciding who goes down, Everton have what looks the toughest final day game at Arsenal, whilst Leeds will surely fancy their chances if needing to bear Brentford at home.

I think I am going to enjoy these final three Newcastle United matches and I still can’t quite believe that these last two weeks of the season aren’t going to be packed with unbelievable levels of stress.

These are this weekend’s remaining Premier League matches: