A new official PL report (see below) detailing how this past (2021/22) season has seen the biggest ever collective Premier League attendances of this PL era.

This is the thirtieth season since the rebranding and launch of the Premier League, with collective attendances going over 15 million for the first time ever.

These highest ever Premier League attendances, obviously following the very lowest ever total attendances last season, due to Covid restrictions. 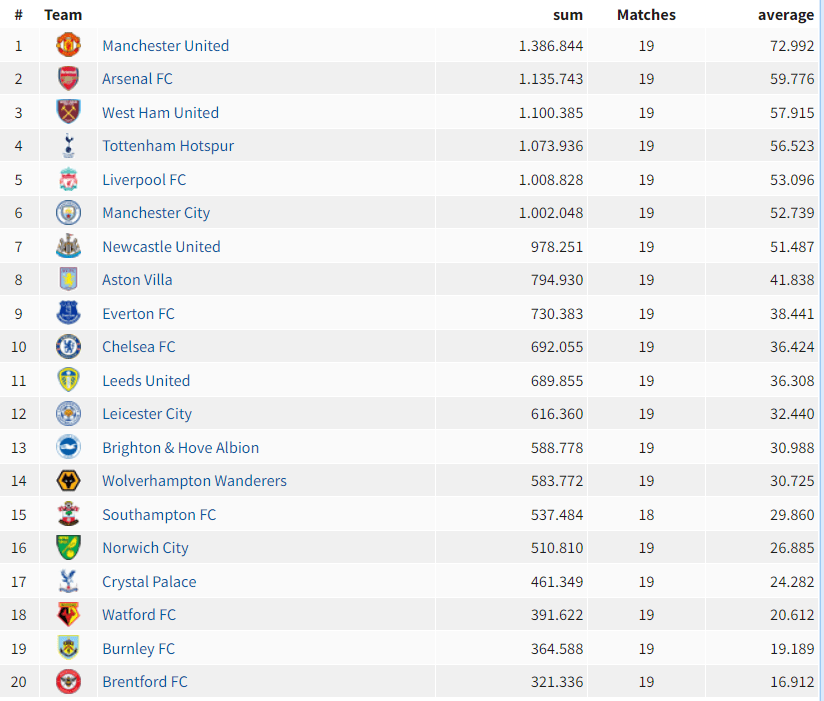 As you can see, with Leeds surviving on the final day, it saw three of the five lowest supported teams relegated.

Between the three of them – Burnley, Watford and Norwich have averaged 66,686 for home matches this season.

Even with Leeds surviving and Burnley going down, it is difficult to see how total Premier League attendances would then go up any further next season and indeed almost certainly fall to an extent overall.

Fulham have been doing development work and Craven Cottage appears to be set for a capacity of around 25,000 next season, Bournemouth a capacity of only around 11,000, whilst not much between the capacities of Forest (30,000) and Huddersfield (24,000).

The drama of an enthralling 2021/22 Premier League season was played out in front of a record number of fans in stadiums.

Premier League research has found that the total attendance of the 380 matches for this season amounts to 15.2m. This is the first time that this number has breached the 15m mark.

This was a four per cent increase on 2018/19, the previous season not affected by stadium closures because of the COVID-19 pandemic.

The average attendance for the season across the 380 matches was a record 39,989, up from 38,484 three years previously.

“I’d like to say thank you to the fans for everything they’ve done this season, coming back in numbers,” Richard Masters, the Premier League Chief Executive said.

“That shows how fantastic the competition has been and how brilliant the support is for it.”