A new report (see below) detailing how this (2021/22) season will see the biggest ever collective Premier League attendances of this PL era.

This is the thirtieth season since the rebranding and launch of the Premier League, with collective attendances to go over 15 million for the first time ever.

Ahead of Thursday night’s three matches, these were the average Premier League attendances for all 20 clubs, according to World Football: 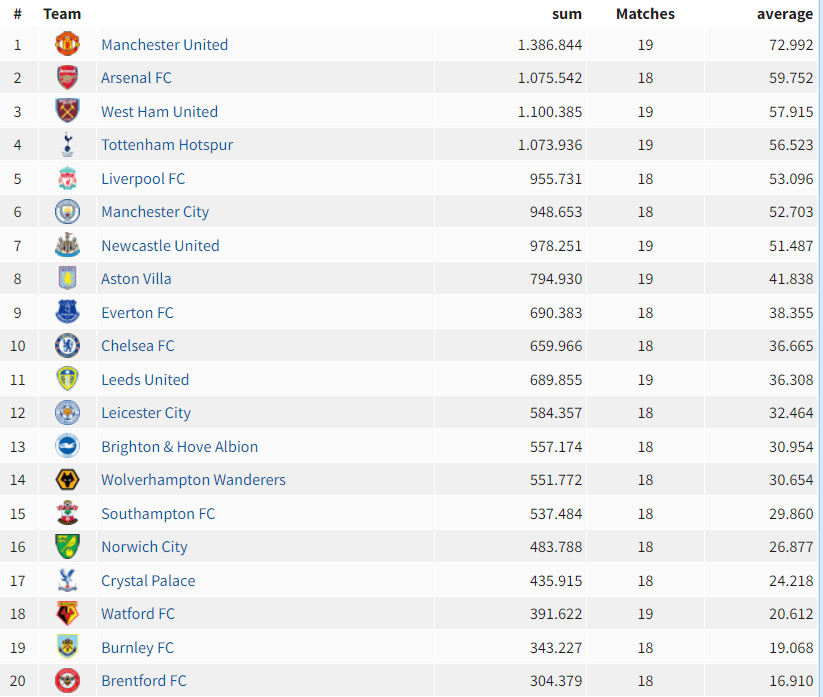 As you can see, if Leeds survive, it would see three of the five lowest supported teams relegated.

Between the three of them – Burnley, Watford and Norwich have averaged 66,557 for home matches this season.

Fulham (17,774 this season) and Bournemouth (9,640) are already guaranteed to go up, with Forest (27,137) and Huddersfield (17,352) meeting in the play-off final. Even if Leeds survive, it is difficult to see how total Premier League attendances would then go up any further next season and indeed almost certainly fall to an extent overall.

Fulham have been doing development work and Craven Cottage appears to be set for a capacity of around 25,000 next season, Bournemouth only around 11,000, whilst not much between Forest (30,000) and Huddersfield (24,000).

These highest ever Premier League attendances obviously following the very lowest ever total attendances last season, due to Covid restrictions.

‘Premier League crowd figures are set to pass 15 million in a season for the first time since the competition was formed in 1992.

The pandemic restricted attendances at the end of 2019-20 and for all of the following season.

Record figures are expected this season despite sanctions affecting Chelsea.

The UK government stopped the club from selling any further tickets for home games in March as part of sanctions imposed on owner Roman Abramovich following Russia’s invasion of Ukraine.

Abramovich is alleged to have strong ties to Russian President Vladimir Putin, which he denies.

Since March, only Chelsea season-ticket holders, away fans, and home fans who purchased matchday tickets before the imposition of sanctions have been able to attend games at Stamford Bridge, with the rest of the seats left empty.

Chelsea’s average attendance for their final five home games of the season has been 32,200 – having been 39,900 over the rest of the season.’