Interesting to see the impact on the Premier League relegation odds after a very dramatic Saturday in the top tier.

With Man Utd v Brentford on Monday night (8am kick-off) to round things off.

These are the six Saturday results so far in the Premier League and then the remaining fixtures to come this weekend: 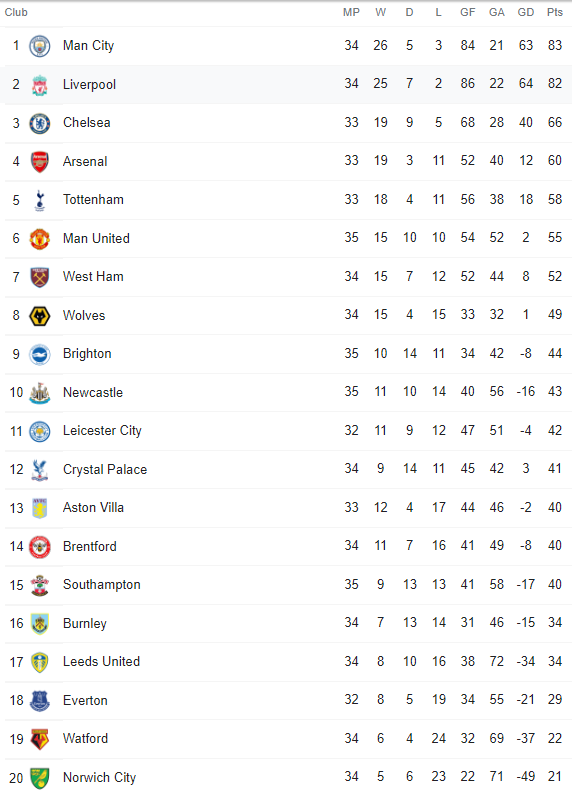 A pretty perfect weekend for Newcastle United fans, seeing their team win 3-0 at Norwich and both Leicester and Brighton only able to draw at home. The net result is that mathematically neither Norwich or Watford can catch Newcastle now, whilst Everton are 14 points behind Eddie Howe’s team and Burnley 12 points adrift of NUFC.

However, after Sunday’s results, quite hilariously it is now Everton and not Burnley who are odds on to be relegated along with Watford and Norwich.

These are now the general Premier League relegation odds for the likely  candidates from various bookies after Sunday’s results:

Norwich are now mathematically down, Villa (1,000/1) sealing their fate with that 2-0 defeat, Gerrard’s win taking his team to 40 points and removing any faint lingering  possibility of relegation.

Watford 1/1,000 can still match both Leeds and Burnley for points BUT would need to win all four of their games and the other two clubs lose all theirs.

Watford had taken an early lead but crumbled in the final seven minutes, two late goals for Burnley (7/2) absolutely changing the dynamic.

That took them to their third win in a row and fifth bottom on 34 points, with a significantly better goal difference than Leeds (9/4) who lost 4-0 to Man City on Saturday.

Now a three way fight for that third relegation spot and a big day for Everton (4/7), if losing at home to Chelsea on Sunday afternoon it would leave them five points adrift with only five games to play.

Southampton (150/1) the only other club that looks even remotely to be in danger of getting dragged into it, currently eight points clear of Everton.

It is Man City away next up for Newcastle, before ending the season with two games where they can realistically expect to have a decent chance of adding more points, Arsenal at home and Burnley away.