Interesting to see the impact on the Premier League relegation odds after Wednesday night fixtures in the top tier.

Only ten days to go now until the final day of this 2021/22 Premier League season and still things far from settled at the bottom.

Norwich and Watford have already gone of course but a big battle on for that third relegation spot.

There were four Premier League games on Wednesday night: 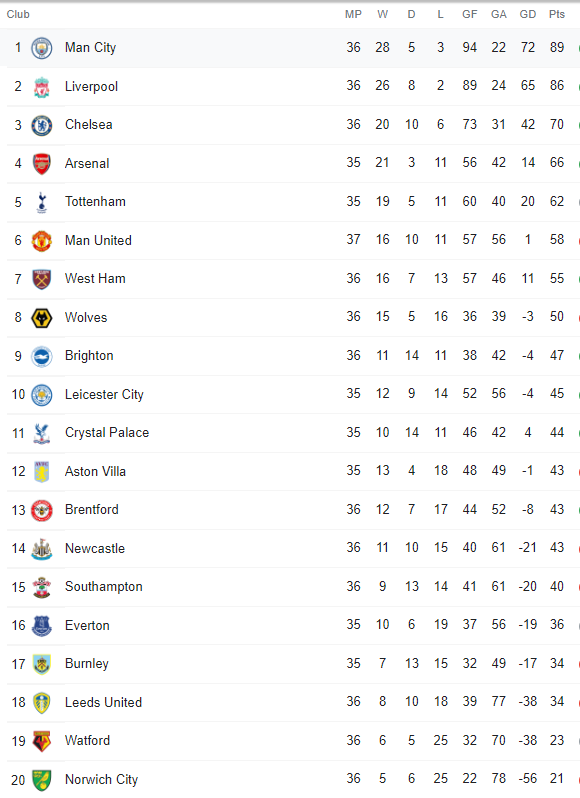 Southampton could still mathematically go down BUT that would need, amongst other things, turning around an 18 goal difference in GD with Leeds.

Leeds losing last night once again AND having a player sent off for the second game in a row, leaves them in prime position to go down, whilst Everton surely would have been all but safe if beating an already down and having to make seven changes Watford side on Wednesday night. That goalless draw leaves them still potentially back in the bottom three when they play next.

Ignoring Southampton, these are the eight remaining Premier League matches that will decide who gets the last relegation spot.

These are now the general Premier League relegation odds for the four clubs who could still go down, from various bookies after Wednesday’s results:

Is there to be another twist in this relegation fight, or more than one?

Everton look on their way to safety but if Leeds beat Brighton and Burnley pull off a shock at Tottenham (Burnley beat Spurs 1-0 at Turf Moor in February), then the scouse mackems would go into Sunday’s Brentford (have won four and drawn one of their last six PL matches) match back in the relegation zone.

When teams are battling for survival in the very final stages of the season, it can throw up some very surprising results.

I still can’t shake the feeling that when Newcastle United travel to Burnley on the final day, it will be a game / result that will help decide who ends up going down.

Thankfully, Newcastle are now only interested spectators to this fight for survival and as for the odds on the various clubs getting a top half place now, they are: 1/3 Leicester, 8/11 Brighton, 5/4 Crystal Palace, 9/4 Aston Villa,  14/1 Brentford, 20/1 Newcastle United