All 20 Premier League clubs have now completed their 2021/22 season fixtures.

A dramatic last day of the season on Sunday deciding who won the title, who went down, who qualified for the Champions League.

Indeed, settling where all 20 Premier League clubs ended up in the final table, just one of the factors that decides what each club receives in terms of cash / prize money.

Football finance expert and lecturer Kieran Maguire has now produced the following table showing his estimates of what all 20 Premier League clubs will receive in total from the 2021/22 season payouts, along with a few notes explaining his workings out..:

“Premier League season over, so who have been the winners in terms of prize money.

“For domestic broadcast deal 50% of the sum is split evenly, 25% based on ‘facility’ (number of times chosen by TV) & 25% on final league position, with bottom side getting 1 share and top 20 shares.

“For every 1 match over 10 each side chosen by the broadcasters it works out as about £950k extra per match. For every additional place higher in the PL it works out as £2.41 million (based on my assumptions, could be a wee bit higher or lower when final figs published)

“Putting it all together, Manchester City earned £161.3m and Norwich £100.3m. Some clubs (Newcastle, Spurs, Villa, Everton, Leeds) finished higher in the prize money table than the league table due to popularity with broadcasters.” 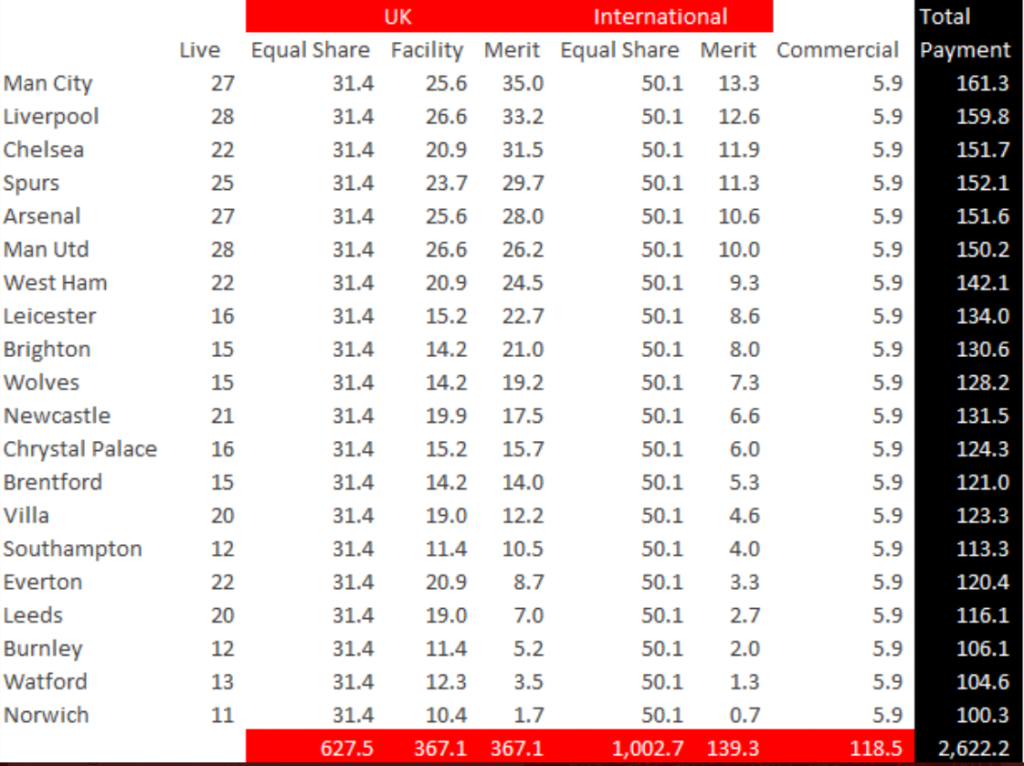 As Kieran points out, Newcastle United may have finished eleventh in the table but due to how (as usual) popular they were with broadcasters, ending up ninth when it comes to money – as per his estimates.

Wolves and Brighton both finishing higher in the table but Newcastle United chosen for live TV 21 times, compared to 15 each for that pair.

Newcastle United expected to get £131.5m in total and indeed ending up only an estimated £2.5m behind Leicester who finished eighth in the Premier League this past season. The Foxes chosen five times less for live TV in the UK than Newcastle United.

This is of course just one of the (main) revenue streams for the new Newcastle United owners but it is one that they and Eddie Howe have already had a massive impact on, in such a short space of time.

Major strides are set to come both in commercial revenue (sponsorship deals, merchandise etc) and also in matchday revenues (especially once St James Park expanded, plus of course extra matches when trying in cup competitions), just a question of how quickly this all escalates.

Two things are for sure at Newcastle United, a lot more money is going to flow into St James Park in the seasons to come AND a lot more cash is also going to be spent.

Ambition with a capital A.