No time for this kind of behaviour with Newcastle United

I have to say I’m disappointed, not something I’ve felt very often of late.

Last week, Mark Douglas (former chief Newcastle United writer at the Chronicle who now works for the i paper) said that it would be a good season for United to finish 8th next year.

This followed on from a series of tweets I saw initiated by Taylor Payne (host of the Athletic’s Pod on the Tyne), where several fans agreed with the assertion that top ten would represent progress for Newcastle United in 22/23.

This is all very balanced and sensible…but this is no time for this kind of behaviour.

In response to Mark Douglas, fellow journalist Craig Hope raised the very valid point of how the form in the second half of the season just finished, suggested far loftier ambitions. It’s an oft-stated point but it’s truly incredible that in the second half of the season, Newcastle’s 38 points from 19 games has us only behind Man City and Liverpool, literally Champions League form. Add in the factor that most of this was achieved without our primary goal threat in Wilson and it’s even more remarkable.

I did a bit of a sense check for this and ran an online poll. Looking at the first half of the season (and encroaching slightly into the second half by including the draw at home to Watford) United only won one game, as the hangover from the Bruce era persisted into Eddie Howe’s early days in charge. I asked for fans opinion on how many additional points we’d have taken from those first 20 games if Howe had been in charge from pre-season and had all of the January signings at his disposal throughout.

The overwhelming majority (64%) believed we’d be between 12 and 24 points better off, with a further 21% suggesting even higher returns. 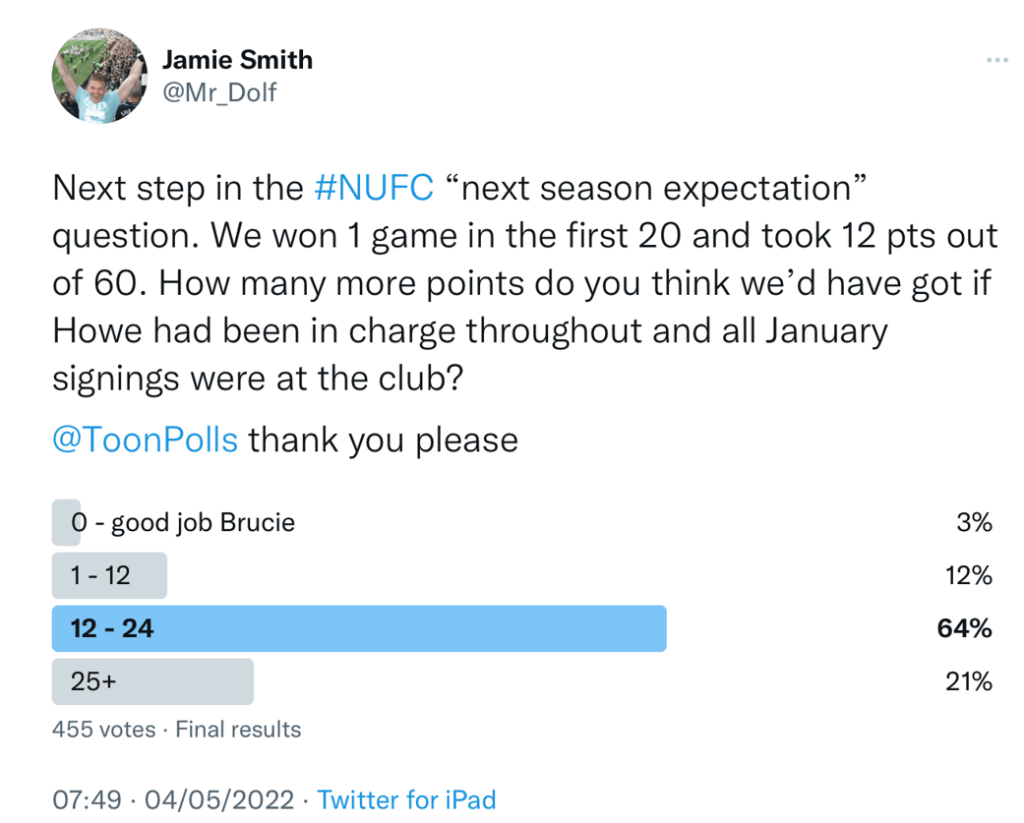 For context, the very final Premier League table meant that 10 points more would Have seen Newcastle United in a Europa spot, whilst 23 would have been enough for the final Champions League place.

As a quick guide, I would suggest that 10/12 points could have been achieved by improving on draws in two games with Watford, and at home to Southampton, Leeds, Brentford and Norwich. If you want to look exclusively at the Bruce era, I’d say we could do better than losing at Villa, or at home to West Ham.

Of course there’s devils advocate here. People may point at the stunning run of home form and say it’s not sustainable over a whole season, or the seven game run after the January revamp. I would argue that, while this is valid, this is no longer a life of Pardewesque “streaks”. Eddie Howe has a culture and a standard that has created consistently winning performances, at times against the odds. I’d question if, going into the last game of the season, anyone had any doubts we’d beat Burnley, even in spite of their greater need?

Of course, there’s the other factor at play here. The team mentioned above, that was third best in the latter half of the season, whose supporters believe to be at European standard, will be strengthened considerably this summer. Three or four first team places will be improved and three or four current starters will add to greater squad strength in depth.

The argument here is that others will also strengthen but I would question where this great fear comes from. At this point I’d refer to my previous article about the punishing schedule for all European qualifiers and ask everyone who exactly is there to fear? Man City and Liverpool are streets ahead of course, whilst Chelsea look like they may be able to sustain their previous clout, but Spurs are heavily reliant on two players. Any impact on Son and/or Kane (or if Conte gets lured to PSG) and they might find themselves vulnerable under the weight of that Euro campaign.

However, it’s the Europa league lot that I’d question. West Ham have built impressively under Moyes, but fell away a bit second half of the season. Did anyone watch our game at the London stadium and think “these lot are miles ahead of us?” Add in a fit Wilson, summer signings and the Europa Conference league and I think it defies the odds to suggest they are going to look stronger than us.

The omnipotent threat of Manchester United is one we need to treat as what it is. A side in transition that has consistently underperformed against its own high standard. Ten Haag has a rebuilding operation to start from scratch and, without the Champions League as a draw, this may not be an easy task for a club that finished only 9 points ahead of us last year. Similarly Arsenal need a new strike force and have been steady but unspectacular under Arteta. Both will suffer from the Europa league, a competition they cannot afford to disregard given it presents a route back to the Champions League. I wonder if people treat both these huge clubs with extra respect because of who they are, as opposed to what they currently are?

I am putting a lot of stock in the autumn, where I fully expect a more rested, reinforced and invigorated Newcastle United to take advantage of these other clubs and break into the top six. I realise there are factors to consider, obviously, as we enter another transfer window where potential sellers will inflate the price for any Newcastle bid, and we may face awkwardness as experienced with Botman and Carlos in January. At least we don’t have the relegation spectre to frighten off the players themselves. There’s also the need to maintain form and fitness, as even a stronger squad would still rely on the contributions of the likes of Bruno and Wilson, but I just have faith in the management to give us far more chance of doing this than we’ve previously experienced.

So, why do so many have such modest ambitions, including those that are extremely well informed?

I honestly think this is an inherent fear that any expression of ambition will leave the Newcastle fanbase open to ridicule and scorn from the usual suspects in the national press. While part of our new world needs to be the ongoing discussion about the unacceptable elements of the Saudi state, this is something that regularly extends into sniping, pettiness and basically bullying.

Fair enough to comment on events in KSA from the wider perspective, but the constant mansplaining of the situation to ordinary fans on social media is becoming tiresome, more so when it emanates from journalists with a clear affiliation to the established clubs. I expect this will be a fairly swift turning circle when Newcastle become the establishment, hosting the big games and offering the plum trips.

Kicking down to Newcastle fans is nothing new, after years of defending the previous owner and saying we should be grateful, the ridiculous narrative that players would not want to move to our region and, persistently, the line that we have unrealistic expectations. Paranoia of such an accusation has, I think, led to over-compensation, with people ignoring the evidence of their eyes to respectfully state that 8th place would be lovely thank you very much sir, sorry to have troubled you sir.

We finished three points shy of eighth place this year and it’s not unreasonable to expect progress. Even the same points per game ratio we’ve had since the turn of the year (with a better team) would be a decent step forward. Maybe Eddie has raised expectations by performing so very well this past half season but I’m sure he’ll have his own expectations for all involved to kick on. This means taking advantage of the vulnerable above us, claiming a European spot and progressing to winning trophies in the seasons that follow. That is both the established agenda and the trajectory based on evidence of recent months and no one should be ashamed to say so.

It’s OK to dream, they can’t take that away from you with words. Top six at Christmas.