Apologies for the delay in this to those with an attention span of <24 hours, but I’m afraid I needed a bit of processing time, as is good practice in dealing with any trauma.

First off though, it’s worth reflecting on how brilliant it felt to be travelling to this thankless horror fixture without desperately hoping to grind some unlikely points out of it. Defeats from Burnley and Leeds earlier in the weekend meant both could only equal our points total, and the thought of being basically safe at this point would have been unthinkable a few months ago.

Massive credit to the transformative efforts of Eddie Howe, the inspired January signings and every player that has dug in to show what they’re capable of to reach what was a vital (and challenging) short-term goal.

So it felt good to be having a few beers on a scorching Manchester afternoon in the knowledge that today’s result held no pressure or relevance outside of the title battle I couldn’t really care less about. In fact, today had potential to be a valuable test, as Eddie could have a good look at who in his squad is capable of kicking it with the very best and who, erm, isn’t.

Well, Eddie will certainly have had some food for thought today.

It would probably have been no different in terms of the ultimate outcome had Chris Wood taken a gilt-edged chance to grab the lead within ten minutes, heading directly at Emerson instead of burying ASM’s cross, but it might have felt nice for a bit. Probably for about 9 minutes as that was how much longer it took for City to take the lead. Cancelo found himself up against St Max and easily won the ball from De Bruyne’s floated cross, directing it to the back post where Sterling peeled off Burn to head in. It felt like City had strung together about 18 passes to finish this off and any hope we (or Liverpool) had for an upset probably died on its knees at that moment.

Hope did briefly resurface when Wood actually did find the net from a rare United attack. Lascelles met a corner with a power header that may well have found the net on its own if it hadn’t hit Bruno, rebounding to Wood who bashed it in, only for the Brazilian to be rightly flagged offside. This should have come as no surprise as United showed a frustrating inability to stay onside with just about every half-promising move forward snuffed out by that infernal flag. I would suggest City played a mean offside trap, but most instances were unnecessary wanders off such as Bruno’s that cost the goal.

No matter, the focus would soon switch to mess ups at the opposite end. Gundogan hit a vicious volley from a corner that Dubravka fumbled horribly. There was a bit of a mess as Dias kicked at the ball while Dubravka seemed to have his hand on it in the sort of situation that City of Liverpool might expect a free kick in. It came loose and Laporte stuck it in.

The start of the second half saw United have a half try at rescuing the situation, although the only efforts City would allow were wild and wide from Bruno and ASM. Of course there was to be no respite. Saint-Maximin gave away a needless corner and Rodri had an easy unchallenged header at the front post. Bit rubbish really.

I’m not sure I was pleased with the substitutions that followed as risking Trippier and Wilson in a game that was dead and buried could have backfired, but both had decent cameos, as they got some game time in their legs. Trippier’s deliveries were far better than anything we had offered so far, as a Lascelles header was saved by Ederson, before Wilson himself just failed to connect with another whipped cross.

Wilson’s best opportunity was still to come though, as Murphy slid him through one on one and a consolation goal looked on. Ederson closed him down and smothered the effort but at least he’s getting in those positions.

I think I’d have been ok with 3-0, which is not a disgrace and probably a fair reflection on the match. However, it was too much for a ragged Newcastle to hold on, shipping two far post tap-ins from Foden and Sterling after the 90th minute.

A 5-0 felt like a shocker, and let’s be honest here, some players showed up that they can’t be involved in a team that wants to take the next natural step. Sean Longstaff was frighteningly anonymous in a display that doesn’t exactly scream “new contract”. Almiron offered nothing as an attacking outlet, as Krafth did a decent job dealing with Grealish but always found Miggy looking at him with what seemed like shock whenever he tried to launch a right wing counter. Howe spoke later about player sales in the summer and there will be a few ideas presented here. 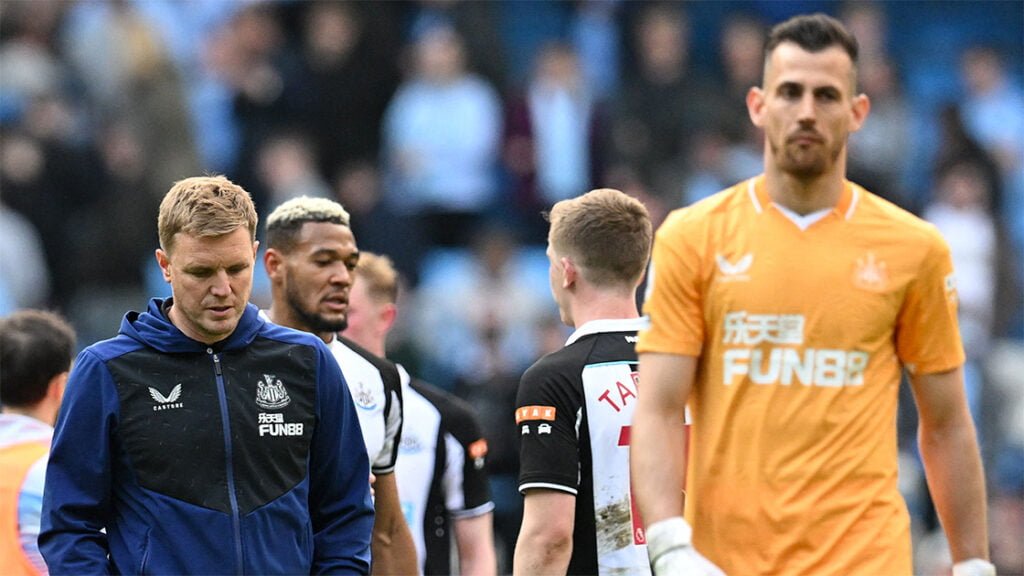 Beyond that, several of the season’s better performers were left chasing shadows by the opposing super team. The poser for the management is whether to appreciate that many a team has come up short against Pep’s billion pound team and not worry too much, or use this toughest of games as a litmus test for tough calls. Calls such as whether we can accommodate the sloppy side of ASM’s game, whether Targett is high standard enough to make permanent and (shock horror) if Joelinton has a future in midfield, or what it means for him if not.

The players came over en masse after the whistle to an away end still shell shocked by the injury time double. And I mean the players, the whole bench and Eddie’s full back room team. They hadn’t been up to the standard of another strong away following and they knew it, but the respect was appreciated and acknowledged.

Perhaps it stood out more in a fairly subdued home atmosphere, with City fans leaving at 3-0, perhaps still smarting at the midweek implosion and the elusive Champions League still evading them.

We should have extreme caution in passing any comment on Man City here. Remember they’ve been soaring like this for over a decade now, and I don’t think it’s good for an atmosphere when you turn up expecting to win easily every week and being proved right most of the time. League games like this are filler between Champions League attempts and the one game of note with Liverpool that determines the destination of a league title that maybe doesn’t prompt the excitement it once did. You have to wonder if we may be on this path and how long it will last before similar barbs are thrown our way.

Perhaps the Etihad doesn’t help. I think it’s a magnificent stadium, great looking ground that screams big occasion. But it has too much of a widespread, built-for-athletics feel to forge a real football stadium atmosphere. Words of warning for anyone with capacity headaches about the pitfalls of abandoning a famous old ground that is perfect for the atmosphere building.

So, one to forget, but also a standard to look back on. Next year this absolutely should not happen, although the points are surely still a write off. Maybe in three years time we’ll have been progressed to be one of City’s “interesting” games.

This result was a hark back to the Mike Ashley era, ironically on a day when the last vestiges of it disappeared as survival became so nearly mathematical. The future is bright and things like this are just part of the journey. Now let’s never speak of this game again thanks.

(Pep Guardiola gets it half right… Read HERE)