Companies House making public (see below) that Majed Al Sorour had joined the NUFC board.

Back in January 2022, The Times reported (also see below) that Al Sorour was set to becomes a Newcastle United Director, once he had been approved by the Premier League.

Seen at St James Park at a number of home games already this season, Majed Al Sorour was a professional footballer with (Saudi club) Al Nassr before embarking on a career in business.

“Many thanks to you all for the wishes.

“I’ve been on this assignment since December and not alone.

“Team PIF, Amanda, Mehrdad (Ghodoussi), and his excellency (Yasir Al-Rumayyan) with his wide and thorough vision.

“I’m very pleased that we have not only saved our team from relegation, but we may have the chance to finish top 10 in the premier.

“The work has just started and I and all of us look forward to the next season with god’s bless and hard work we will do lots more not only for the NUFC but for the whole city of Newcastle and it’s amazing people.”

This latest Newcastle United move becoming public via a Companies House update – 12 May 2022: 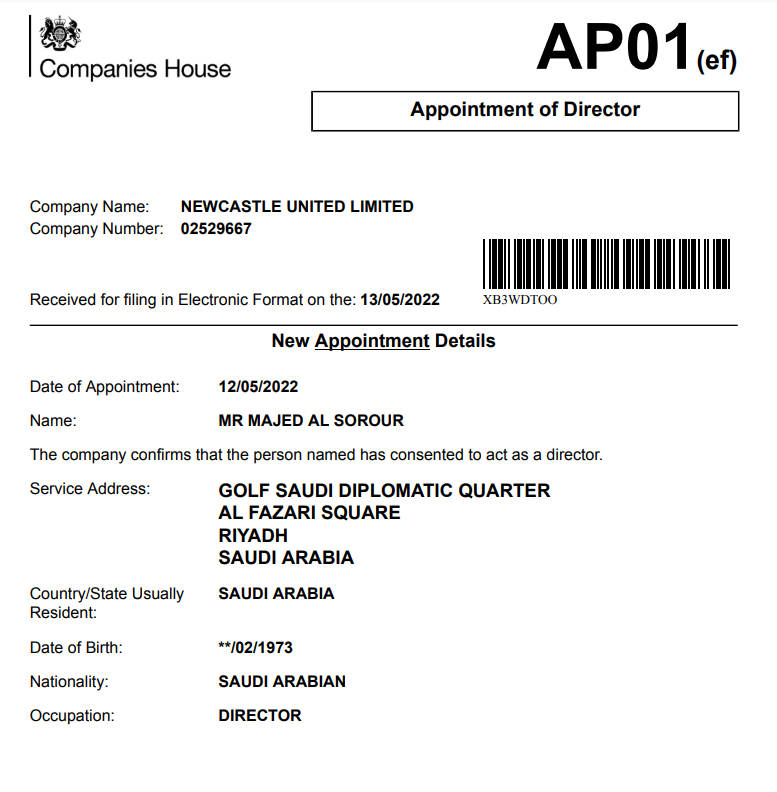 This latest step towards more hands on involvement from Saudi Arabia, coincides with leaked alleged Newcastle United kits for next season being circulated on social media, including one change strip that is green and white.

‘Saudi Arabia’s immensely wealthy Public Investment Fund (PIF), which owns 80 per cent of Newcastle, wants to mirror the multi-club approach taken by Manchester City’s Abu Dhabi owners, but is also considering investing in other sports too.

That ambition will be given impetus by a move by Newcastle’s owners to appoint Majed Al Sorour, the chief executive of the Saudi Golf Federation who has led Saudi Arabia’s drive to bring the world’s top golfers to play in the Gulf kingdom, as a new director of the club. It is understood the appointment has been passed to the Premier League for approval under its owners’ and directors’ test.

Al Sorour is a close associate of Yasir Al-Rumayyan, the PIF governor who is the chairman of Newcastle. Al-Rumayyan is also the chairman of the Saudi Golf Federation and Al Sorour, a former professional footballer in Saudi Arabia, has been seen with him in the directors’ box at Newcastle matches.

His appointment will mean there are two Saudi representatives on the board, alongside the minority shareholders Amanda Staveley and the Reuben brothers.

Al Sorour is an adviser to the PIF and has been on the board of the football club Al-Nassr in Riyadh. Last month Al-Rumayyan was appointed president of the Asian Golf Federation and Al Sorour as secretary general of the organisation.’