They have analysed all Premier League matches this coming weekend, including Newcastle United against Manchester City.

Their computer model gives Manchester City a 85% chance of a win, it is 12% for a draw and a 3% possibility of a Newcastle win (percentage probabilities rounded up/down to nearest whole number).

So basically, Newcastle United rated at almost a 33/1 possibility (3%) of winning and slightly better than a 7/1 chance (15%) of avoiding defeat and getting a draw or better.

Newcastle United have themselves to safety thanks to ten wins in their last fifteen PL games.

Whilst Manchester City have only lost one of their last 24 PL matches, with 20 wins and the only points dropped in that time having been draws at Palace and Southampton, plus losing at home to Tottenham and drawing with Liverpool at the Etihad.

This is how the Premier League table looks on Wednesday ahead of this weekend’s matches: 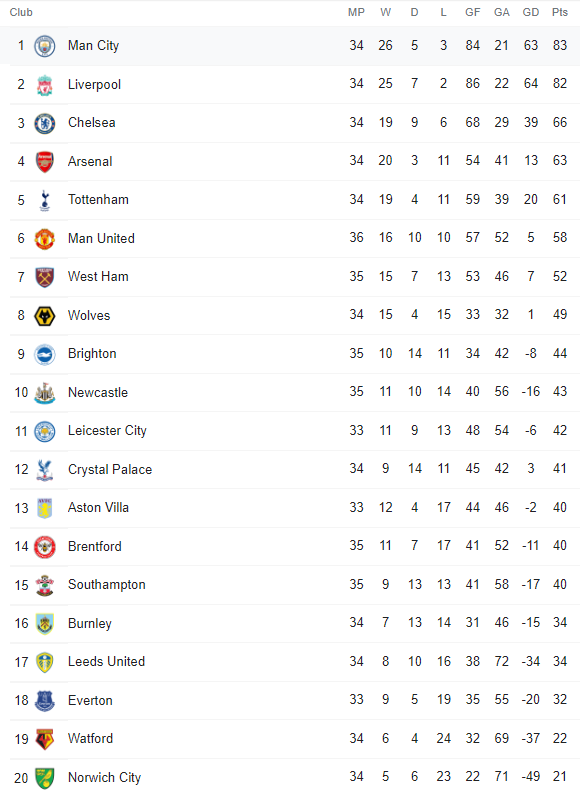 At the very top, this probability model rates it an ongoing close fight, with Man City a 68% chance to win the title and Liverpool 32%.

We can also see how the computer model rates the percentage probability chances of relegation at this late stage of the season…:

All other clubs that can mathematically still go down, rated at less than a 1% chance.

Norwich  already down, whilst Watford (more than 99%) having all but joined them.

However, the third relegation spot very much all to play for.

Everton (34%) beating Chelsea last weekend has given them a lifeline and despite being two points below Leeds (though Everton a game in hand), the Elland Road club now the 45% favourite to claim that third relegation spot.

Burnley (20%) have given themselves a great chance of avoiding the drop by winning their last three matches but now all about who can hold their nerve and pick up points in the remaining three or four matches.

This weekend sees Burnley at home to Villa on Saturday, before then on Sunday Leeds are away at Leeds and Everton away at Leicester.

Three matches where anything could happen, with the trio desperately battling against the drop.

Whilst to finish top half of the table, NUFC now 7/1 after the defeat to Liverpool.