The Newcastle United owners had an ‘interesting’ Monday ahead of the Arsenal match.

Jake Daniels making headlines in which he came out as gay.

Jake is a 17 year old footballer who plays for Blackpool.

It made massive news, which tells its own story really.

The fact that a 17 year old football player who has only played nine minutes of first team football (for a Championship club) making it publicly known that he is gay, leads to such worldwide coverage.

Especially when no disrespect to Jake Daniels but he was a player that nobody outside of Blackpool would have previously heard about.

The point being, that it is massive news because he has become the only current ‘active’ football player in the UK to come out as gay.

This to a backdrop of where we all surely accept that there are thousands of gay players playing for clubs in countries all around the world and no doubt within those thousands, there must be some very high profile players who just happen to be gay – but of course for whatever reason(s) don’t feel comfortable in making the fact public.

Anyway, back to the new Newcastle United owners.

Along with much of the rest of the football community around the world, they put a message out regarding Jake Daniels making the brave move to go public 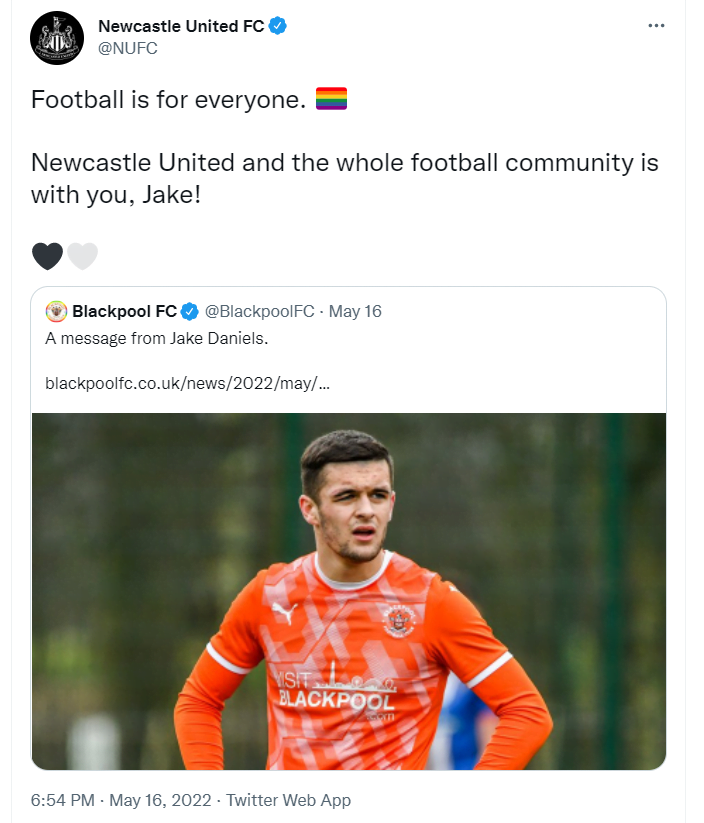 The replies (see below) to the Newcastle United owners message (Some people in the replies claimed that this Tweet will have just been NUFC social media staff putting it out of their volition, something which most definitely won’t be the case, the subject such a hot potato (see the replies below!) it will definitely have been okayed at the highest level)

The thing is, this tweet from the Newcastle United owners and the reaction / replies is pretty much an absolute repeat of what happened back in October 2021, when an official NUFC message was put out in support of Australian football player Josh Cavallo, who came out as gay.

The Newcastle United owners have absolutely agreed for these messages to go out as officially from our club. The same with any number of other tweets / messages that have gone out from official NUFC social media.

Indeed, the very next day after the Newcastle United owners message in support of Jake Daniels, this went out on the official NUFC Twitter on Tuesday 17 May 2022: 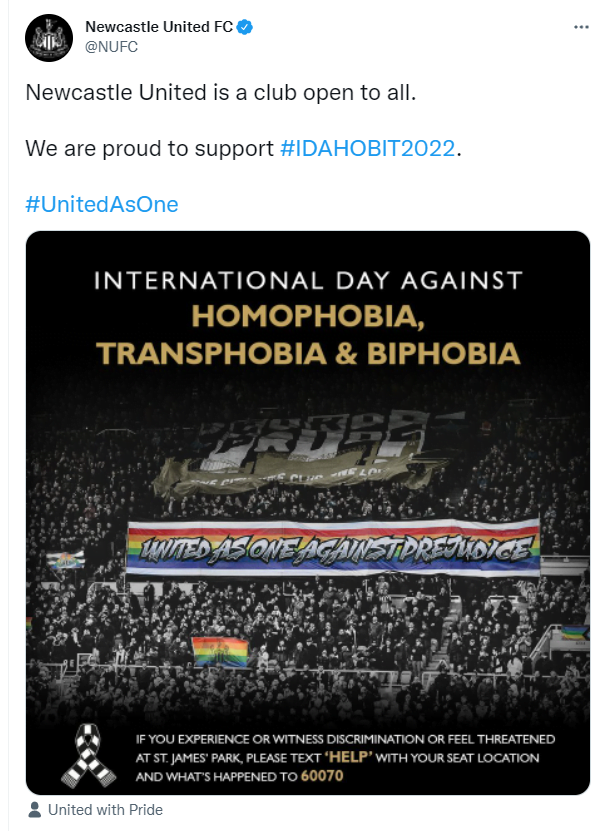 Now as you will see in the replies below, the club tweet has predictably attracted massive attention, everybody from journalists, human rights campaigners, fans of whichever other clubs, people totally disinterested in football…and Newcastle fans!

No surprise either that so many of the replies aren’t positive, in terms of their reaction to the Newcastle United owners putting out something like this message.

Something that we had all better start getting used to because just as Man City have experienced, the make up of the ownership of NUFC will ensure this kind of thing happens time and time again in the years ahead. Newcastle United a real political football that will be relentlessly kicked around.

The thing that gets me, is that whilst I obviously respect any genuine person who is making a valid point regarding concerns about the way life is in Saudi Arabia and the actions of those in power there. When you see so many of the replies below, there is a lot of criticism (of NUFC owners and of NUFC fans!) but in this particular case of Jake Daniels and what should / shouldn’t have been the response of the Newcastle United owners, I see there were broadly three options…

Put out a message in support of Jake Daniels.

Put out a message that wasn’t showing support for Josh Daniels.

So whilst of course the arguments over who should and shouldn’t be allowed to own Premier League clubs and who are the actual real effective owners of NUFC, will never go away, I’m puzzled as to in this instance exactly what was the right thing for the Newcastle United owners to do (the same when it was the case with Josh Cavallo).

No doubt those (as well as people with genuine concerns) who simply have it in for Newcastle United and the fans would have loved it to have been option TWO above. However, in reality, the only two options were option THREE and do nothing, or what they did do with option ONE in a message of support for Jake Daniels.

On balance, I would say that surely something like this incident and the debate the tweet from the Newcastle United owners has stimulated, must surely be seen as something positive. Saudi (whether you accept it is PIF or the regime itself) ownership of Newcastle United putting out a supportive message regarding a gay football player, is to me a clear very small step forward. The fact that in the replies to the NUFC tweet there were clearly some Saudi people (who weren’t bots / trolls) not happy with that message going out with Saudi Arabia linked to it, reinforces to me that this was a positive thing to do.

To get any major change in so many countries where human rights are minimal / non-existent, won’t ever happen overnight and will be a very long process to make any progress pretty much anywhere.

Newcastle United fans never had a vote on who the owners of the club would be, it is only Mike Ashley who decided that, so we as supporters have had this situation landed on top of us. Hopefully the way that the vast majority of us will act in the years ahead, will in some small way help progress to be made in Saudi Arabia and elsewhere.

Some of the replies to the official NUFC Tweet…:

‘Maybe get the govt that owns you to dramatically improve how they treat LGBTQI people then.’

‘Please remind me about the laws towards LGBT people in the kingdom that his club always and always will exist in. We’re still a British club no matter who owns us. Believe me, I’m against the Saudi Regime and everything they stand for. But the club hasn’t done anything wrong.’

‘This is good to see. Considering the obvious elephant in the room, NUFC have a moral duty (imo) to highlight social injustices and support those impacted by them.’

‘Absolutely love to see this.’

Glad to see the club upholding the correct values. An important message to be sending out.

‘As is with every other instance, if you’re not willing to support the club’s values and morals, which have been here since day 1, you’re not a true fan, and never will be.’

‘You realise who owns your club, right?’

‘It was the English Premier League that forced the clubs to this terrible thing.’

‘What terrible thing? standing for equal rights for everyone?’

‘(Abdullah claiming to be an NUFC fan…) That’s it. That seals the deal. I am no longer a Newcastle fan! I’ve been a lifelong fan since 1992 and I officially will not be supporting anymore. I’m going to support a better team.’

‘Oh come here and give us a kiss abdullah.’

‘Anyone who’s against our club putting this out isn’t a Newcastle fan we don’t want you.’

‘So the official NUFC twitter account posts our support of LGBTQ+ players, everyone’s reaction, “why don’t NUFC speak out against the Saudi Owners”.’

‘I wonder if your owners agree…’

‘Have you checked with your owners, first?’

‘Of course I fully expect the comments section to be negative or toxic from non-NUFC people.

‘I see sport washing is in full affect here

Maybe you should say that to your owners as well eh?!!!’

‘Change always requires someone to stand up and be an example! This shouldn’t have to be a conversation, but unfortunately it is. Hopefully this is the first step to normalising gay footballers in the game!’

‘Justin Fashinu was hounded for being him back then. The world has moved forward, and at 17, I have nothing but respect for Jake!!’

‘The replies to this are, on the whole, a dumpster fire. But that’s expected.

Good on Jake and football is for everyone.’

‘The owners haven’t ok’d this message.’

‘Newcastle admin about to get sacked.’

‘We are Newcastle fans in the Middle East, we aren’t with you.’

‘All strength to Jake and the LGBTQ community in sport.’

‘Whoever tweeted this at Newcastle is in big trouble with the owners.’

‘When you say everyone, you don’t mean everyone. I doubt your owners are happy about this.’