Moving forward with Newcastle United : Green away strips – The Prequel

A year ago, countering the idea that the Kevin Keegan achievements back in the 90s at Newcastle United were due to the ‘highest spend ever’ I got a bit carried away and taken down memory lane.

Looking at our fun summers, like imaginary summers of our youths, except real, it felt worth reminding or sharing how they used to be at a normal club. Besides it was an Mike Ashley summer, not much happening.

Things have of course now changed and what was then reminiscing a year ago, is now more of a guide and where I left off, may happen to be the most applicable to now.

Moving upward, a surprisingly good previous season raising the expectations of some, Forest promoted, financial irregularities at a preferred club, Saudi Arabian football, Steve Bruce popping up as ingratiating as ever and a green Newcastle away strip.

Not now but the ball tampering, Flintstones movie and perhaps other topical references as childish innuendos, from the summer of 1994.

The troublesome St James’ pitch that cut up over winter 1993/94 was dug up to make way for a velvety new, more compatible surface immediately after a lap of appreciation marked the end of a season in which we had finished third, been branded ‘the entertainers’ and both outscored and outplayed (better football) everybody else. Some 9,000 fans bought patches of the dug-up turf from a local garden centre. Making its way into gardens, display cases and even living room surfaces across the region.

The Telegraph reported that our 93/94 season video was the top-selling sports video. Two places ahead of Manchester United’s. 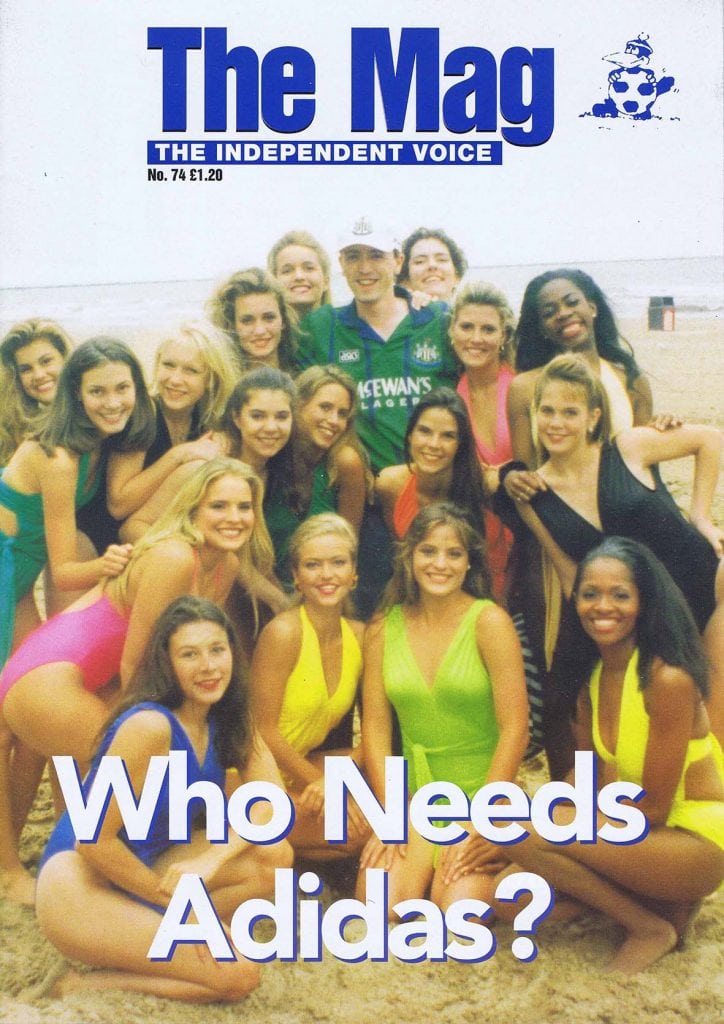 Our ‘one off” green third kit, brought in specifically to negate a colour clash with Sheffield Wednesday, was back by popular demand after a complete reversal of convention where fans demanded a superfluous third strip be foisted upon them.

The bad thing about finishing third was that were was so little room for improvement.

The margins felt finer and dangerous from this vantage point. One signing better or not, one result better or not ,could be the difference between moving forward and dropping down.

It was really new territory for us. Previously we’d only have had to worry about which players would have been sold.

Our horizons broadened in tandem with the leagues.

We were heavily linked with Feyenoord defender Ulrich Van Gobbel to the point it seemed inevitable. A lack of height had been identified as a weak spot and with Howey’s persistent injuries we were clearly looking for a central defender.

A chance to scout Van Gobbel and more would arrive with the World Cup, USA ’94 – in the days when “FIFA World Cup” meant a tournament on a mate’s Mega-Drive. There was scepticism going in but it ended up being described as either the best, or the best since 1970.

Even OJ Simpson raced home on day one to catch it. Not stopping for the police or nothing.

I sat down after midnight expecting a nice stylish win and showing from the Dutch against Saudi Arabia – playing in the first of four consecutive World Cups without the slightest critique – only to witness a shambolic performance, especially defensively, with Van Gobbel in the thick of it. Holland trailed, could have done so by more but with two second-half goals in RFK Stadium in the other Washington, like official tournament opener President Clinton up the road, they were utterly unconvincing but got away with it.

An altogether more competent and stylish defender scored a well taken winning goal against Holland in their next game against Belgium. By which time Van Gobbel was dropped by Holland and apparently by Keegan. He’d eventually fetch up in the Premier League a few years later for Southampton, then managed by Graeme Souness. Which says a lot.

Keegan arrived mid-tournament to do commentary work. I wondered if he’d been as impressed by Alain Sutter and Leonardo (at least before he fractured Tab Ramos’ skull with a vicious elbow) or noted Alexi Lalas, gruff but whole-hearted and effective defensive work and cult character potential. Penny for his thoughts on Newcastle trialist of two years previous. Swede Kennet Andersson scoring twice in the knockout stage to eliminate the Saudis and also against Brazil in 1-1 draw.

The tournament did prove a shop window. Sutter’s teammate, right-back Marc Hottiger, was Newcastle’s first signing. Effectively replacing positionally and pound for pound the outgoing Mark Robinson. Serious injury the previous pre-season perhaps halting his progress. This would allow Venison to continue centrally and Watson’s versatility to be freed up. In the end he’d be needed to fill in for Beardsley in the opening games and Venison was outstanding in centre-midfield.

A club record 2.7million was paid to Anderlecht for Belgian international Philippe Albert. Albert signed on his 27th birthday, was awarded the number 27 shirt and a birthday cake.

He’d played in the Champions League the previous season holding eventual champions Milan goalless twice and also scored another very well taken goal in the World Cup second round against Germany. Had their forward Weber been capable of such, Belgium may have gone further and certainly would have beat the Saudis. Albert being just about the one defender Owairan didn’t beat on his way to scoring, I was pleased to note.

With Darren Peacock signed the previous season, talk was that Keegan intended to adopt a formation with three centre-backs. Conversely the object was to be more offensive, allowing the full-backs more forward freedom.

Their European experience you felt would come in handy. With a multi-pronged season of ambition ahead we also signed full-back Jason Drysdale from Watford and winger Steve Guppy from Wycombe for moderate fees to bolster the squad.

This was the summer the Premier League first went international and showed its growing strength. Partly driven by domestic inflation, exemplified by Chris Sutton’s record breaking £5million transfer to Blackburn.

Spurs astonished with the coup of signing the league’s first international superstar Jurgen Klinsmann, aboard Alan Sugar’s yacht. They’d fought relegation and had 17,000 gates the previous season. It felt like the rest of us didn’t know our own strength.

All the more astounding because Spurs were facing a 12 point deduction (they’d survived by three points in May) and expulsion from the FA Cup for financial irregularities. Why would Klinsmann go there? Sugar must have assured him of successfully overturning these punishments in the courts in due course.

Where Swindon (under now Spurs boss, former Newcastle manager Ossie Ardiles) had been demoted two leagues for their financial irregularities, ultimately let off with one, Spurs of course were let off with everything. If they kept going they may have got a bye in the cup and additional points in the league for their inconvenience.

Invited back to Ibrox after the two sets of fans got on famously the year before, to participate in a tournament with Rangers, Man United and Sampdoria, Playing a team from the same league and televised, was unusual, but I found most assuaging contextually after the Wrexham result (a 4-3 loss) and customary summer rule changes.

Guppy impressed. Waddle-esque people said. Fox scored a screamer in a 1-1 draw like the two games the previous season. The subsequent shoot-out was won by the also debuting Hottiger after Cantona’s smug failed Panenka and despite Steve Bruce’s conversion and strangely hostile, gesturing towards the Newcastle fans in the top tier rather than his own, admittedly vastly outnumbered, behind the goal. 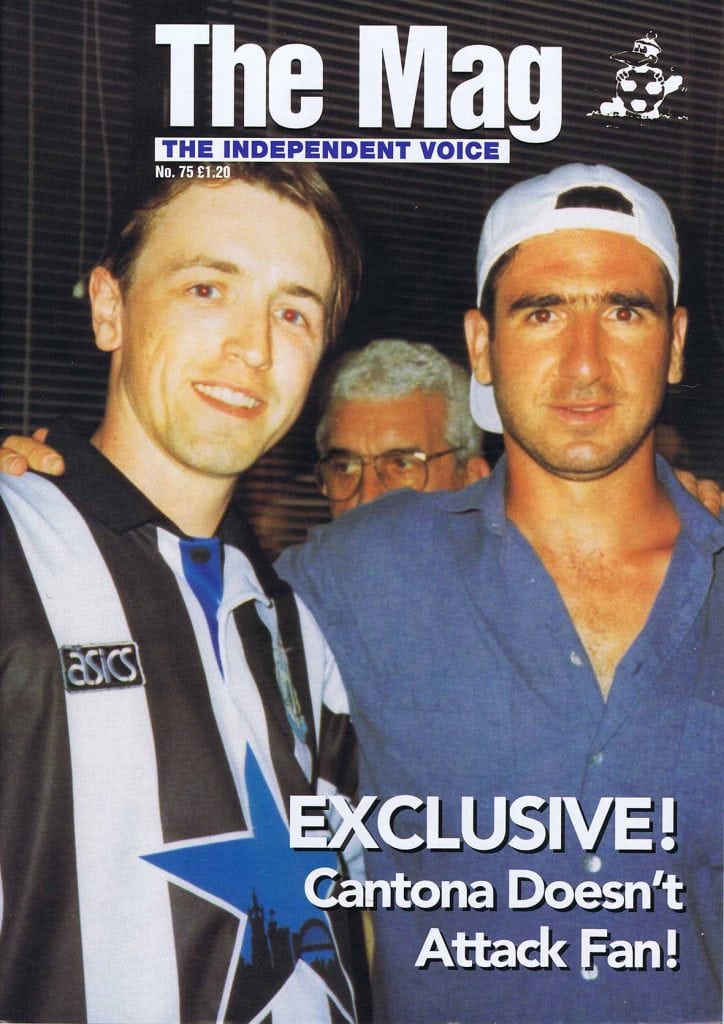 The following day losing, the red mist descended once again on Cantona and Man United. Sent-off for an attempted assault. Good pre-season practice ahead of another stream of attacks in the coming season including on a fan. He’d even get sent off for one of them.

Potentially ominous with Europe ahead, we were all well beaten by Sampdoria. A sign that despite the changing order and a German exodus, Serie A still ruled.

Outspent by seven clubs. It unnerved me that Chelsea, West Ham, Everton and Spurs, the latter two in relegation battles, somehow outspent us without the apparent natural resources.

We had just sold 14,000 Bonds which Keegan said helped fund Albert and Hottiger. Everton and Chelsea didn’t have some gates that high the previous season.

Man City, Sheffield Wed, Chelsea, West Ham, Villa and Everton spent similar or more over the season yet were involved in the relegation battle. Not as simple as spending money evidentially.

All the while the Gallowgate approached completion. Standing lean and looking less organic than the Leazes had without either corner. Work had started in January and the only inconvenience had been a slight reduction in Gallowgate capacity since.

It felt like the ground was growing in step with the club and team.

With a bit of luck it could be ready this season but certainly by next we’d be set.

Note: 1994/95 signings for the record though this might be a bit long:

Manchester U 1.2m (May, Tomlinson)