An excellent battling Newcastle United win at Burnley BUT the final day of the season victory marred by worries about Joelinton.

The 25 year old stretchered off after only 11 minutes.

Bruno Guimaraes and Sean Longstaff doing really well to compensate for that early injury blow, as a very physical Burnley side tried to overwhelm Newcastle United in midfield.

Newcastle United going on to miss his presence against a full on physical Burnley, though NUFC still doing enough to deserve the win.

As well as Eddie Howe’s comments to guide us, we then saw Joelinton in the very forefront of the now ‘traditional’ post-match celebration photo, following the final day of the season victory… 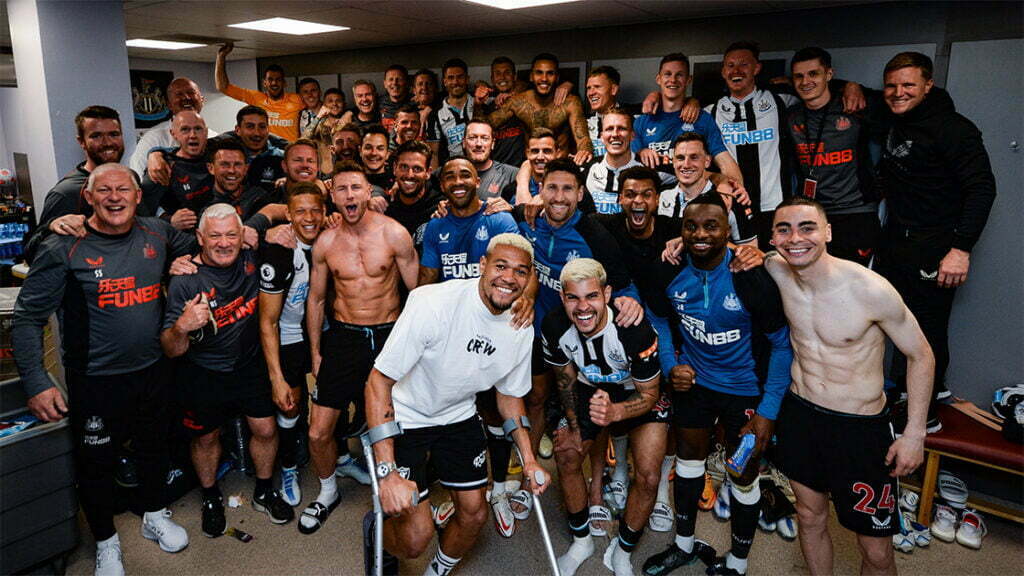 Now on Monday, Joelinton himself has released a statement via his Instagram account, thanking everybody for their help towards him winning the NUFC player of the season award, which the club announced last Monday (see below).

Joelinton, more importantly, also appearing to indicate that there are no serious injury issues arising from that incident at Turf Moor. The Brazilian declaring ‘It is time to switch off for a few days now, get some rest to recharge the batteries and prepare to come back better and stronger for the next season, I can’t wait to see our St James Park full again. See you soon.’

Not taking anything for granted but certainly after seeing him stretchered off on Sunday, I would have settled most definitely for this kind of upbeat update from the man himself.

The thought of a fully fit and focused Joelinton lining up alongside new signings and the likes of Wilson, Bruno G, Burn, Targett, Trippier, ASM, Dubvravka and new summer signings, so much anticipation already for what could potentially happen next season.

Joelinton via Instagram, reacting to his Newcastle United player of the year award, after season ended and he was stretchered off at Burnley – 23 May 2022:

“It is an honour to receive this trophy, it represents all the effort, dedication and hard work during such a hard season!

“First of all, I want to thank GOD for giving me some health and willpower to never give up, my FAMILY who always supported me, my FRIENDS, all my TEAMMATES and every single one of the COACHING staff for always trusting me, also all the Newcastle United fans for their incredible support throughout the season, it would not be possible without you all.

“It is time to switch off for a few days now, get some rest to recharge the batteries and prepare to come back better and stronger for the next season, I can’t wait to see our St James Park full again.

Official Newcastle United player of the season announcement by the club – 16 May 2022:

‘Joelinton has been named as Newcastle United’s official Player of the Year for the 2021/22 campaign.

Over the course of the season, the 25-year-old has reinvented himself at St. James’ Park, particularly since Eddie Howe’s appointment as boss in November, and has played a starring role in the Magpies’ climb away from relegation danger.

Now deployed in the middle of the park, Joelinton is one of the first names on Howe’s teamsheet, excelling from box to box and gaining more and more admirers – both on and away from Tyneside – with each passing week.

The former Hoffenheim man’s struggles as a number nine, which saw him net just six times in 69 Premier League appearances during his first two seasons at the club, already feel like a distant memory.

After being presented with the award, the Brazilian beamed: “I’m delighted and very happy to win this award. Thank you to the fans, the players and the staff for helping me, and all my family and friends. Thank you.

“It has been a great season for me. Many things have happened, but I’m very happy to help the team and help the team stay in the Premier League. Hopefully next season will be even better.”

Joelinton’s name has now been added to the list of previous winners: