I would like to share this story with other Newcastle United fans on here, regarding our recent visit to Manchester City.

I have previously written on The Mag about the background to our family’s situation (see here) but in short, our world was turned upside down last year when my 10 year old son was hit by a car outside of school and had his foot amputated.

It happened literally a year to the day, coincidentally.

He thought he was never going to play football again, he hit rock bottom as you can imagine, then Melissa from the Newcastle United foundation introduced herself at the GNCH RVI and he found amputee football, it’s become his life and his reason for living.

He’s now training with the EAFA England Amputee Football Association and has been chosen to go to the EAFF European Amputee Football Federation camp in Tblisi, Georgia in July, representing his country.

It’s costing a lot of money and EAFA are paying for everything except the flights. Due to the current financial situation the flights have risen from £350 to £1000 so…I’ll try and shorten the story as it’s a long one.

So we went to Manchester City to do a fundraiser with other amputees and their parents, as some of the kids’ parents aren’t as fortunate as others and need money raised in order to travel. We had been given permission from a contact at Manchester City, given parking at the stadium, a shuttle service offered from the car park to the main stand, plus they gave us tickets for the fanzone during the match.

It was my son Harry’s first away match as well. We were there supporting and fundraising for the England Amputee Football Association to try and get the underprivileged kids enough money to pay for their flights. I am just a volunteer and parent who had driven three hours from Newcastle to help. I was obviously under the impression we were more than welcome and had the blessing of club officials, especially as we were granted onsite parking in the blue zone H and offered a shuttle service up to the stadium, which we didn’t take up as we thought the walk would be better for the kids to walk while we fundraised. 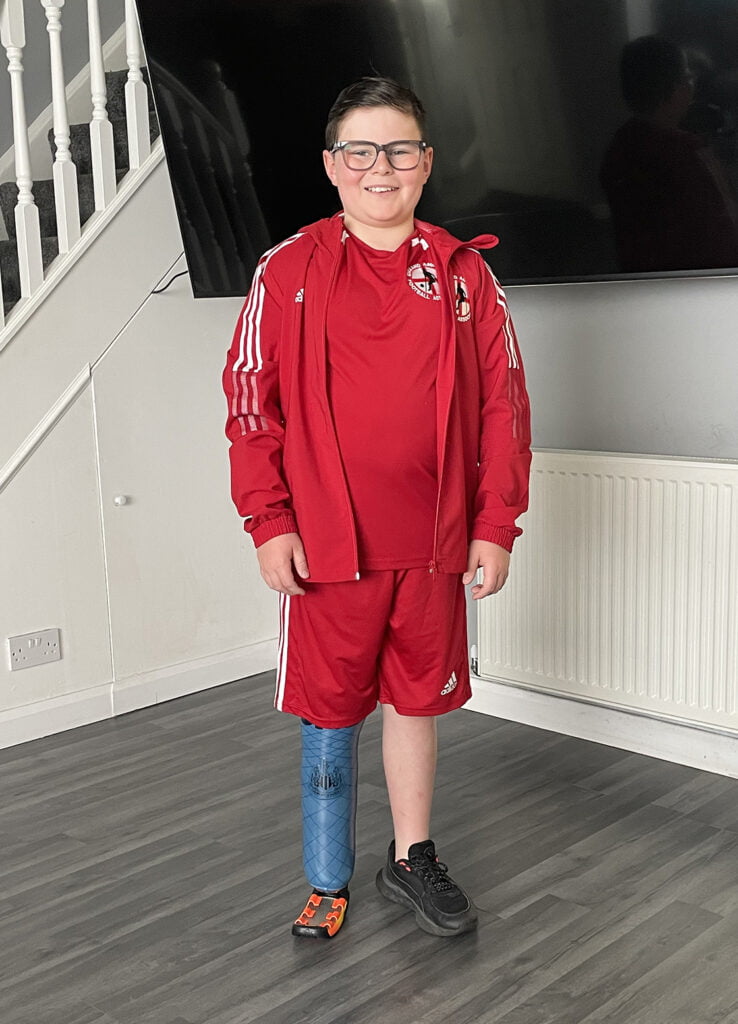 Whilst there, we had a good look around and I have to say I was more than impressed by the facilities and set up at Manchester City and hope that Newcastle can emulate this some day. My son was absolutely buzzing to be at his first ever away ground and thought that it would be a welcoming and warm place. We were all happy to be out and together with other amputee children and parents. It’s not very often, usually every three months, we get the opportunity to meet up with the kids and see other amputees and amputee parents. It’s usually really nice as we can discuss our amputee problems and share their happy stories, which are few and far between for amputee kids, as you can imagine.

Anyway, I digress. We came up to the ground and the kids were having their pics taken on the Manchester City letters and bouncing with excitement, we had a walk around and had a look at a prime position to stand in order to maximise our fundraiser. The kids noticed there was a stage and a band playing so they went over and the stage crew had a word to put a shout out for them, a former player was doing a talk and had pics taken with them. We then had a chat with some of the safety stewards and were told we should have a card reader as many people don’t carry cash and we only had buckets for cash. Everyone was warm and welcoming as we had expected.

Parents and  kids stood across the road from the main entrance next to the bar. It wasn’t busy and there was lots of room. One of the kids decided to start a kick about and some of the police officers on duty came over and joined in for a while with them. That was that, time for fundraising, we stood about holding the bucket and had little success. So we went walking about to see if our luck would change. We were doing ok and a gentleman in a blue coat approached us to ask if we had the correct permission and paperwork. We showed him our paperwork and license from Manchester City council and explained that we had been in contact with somebody at the club. I’m not sure of the exact details as I didn’t personally organise the whos, whats and whys, but he seemed happy enough and walked away.

An hour or so later we were all standing again at the entrance to the square and all of a sudden the man in the blue coat from earlier on appeared again, this time with four or five…what I can only describe as ‘heavies’ behind him, blokes in orange coats staring menacingly at us. It appeared heavily choreographed.

After a minute or so I approached the man in the blue coat and asked him if everything was ok. This time his manner came over as very rude, he asked for the organiser and I pointed him towards our official volunteer from the EAFA who had organised the day. His demeanour and attitude was appalling but I thought to myself, he deals regularly with drunken / obnoxious football fans, so give him a chance. He approached her in a manner I can only describe as bullying, telling her to get us all out. She pleaded and showed him the paperwork and tried to ring her contact inside the club. He said he wasn’t bothered and wanted us out, a few of us remonstrated with him and asked what the problem was, he just stood, silent and staring. He then again told us to leave, even though we kept showing him the paperwork, tickets and license. The man in the blue coat at that point headed off after shaking his fist in one of the parent’s faces and one of the heavies in orange coats immediately came over and told us to go.

Again, we asked for a reason, he replied that the safety manger had said it was because our kids had crutches and prosthetics, so they were a health and safety risk and should be penned in / zoned off  (I can’t remember his exact terminology as I was raging).

I then said to him “in layman’s terms “you are saying that because they are disabled and need crutches, they should be caged off?” To which he confirmed, “yes that’s right.”

I said to him “do you actually realise what you are saying?” and much to my despair, he again confirmed yes. There were plenty of us around that heard him say this and then confirm it. We were all raging and losing our temper so I paused for a moment and took a picture and told him I would be going to the press with this, then all of a sudden the penny dropped and his face changed. I decided I was leaving as I was unable to hold my composure by this point. So we left as not to cause a scene, especially as we were representing EAFA in an official capacity.

Our official volunteer then rang her contact at Manchester City to explain what had happened and we were told to head to the ticket office and they would sort things out for us. When we got there, a man who was just as rude as the one in the blue coat, wouldn’t let us approach to try and see our club contact. By this time, one of the parents was in so much distress she broke down in tears and we all decided to leave without going to the match. My son was also too scared to go inside the ground to watch the match, due to the fact that he now feared being thrown out.

The discrimination we faced was nothing short of disgusting, in my opinion it is in breach of the equality act 2010 and is classed as a hate crime. I have reported this to GMP as a hate crime and would like to point out, that if my child was fully able bodied this situation would never have developed. In football, racism and discrimination is at the forefront of everyone’s mind and there is no excuse for this behaviour either. In fact, if this had been chanted on the terraces or had  been about zoning off people of colour, the perpetrator would have been arrested there and then on the spot.

On my walkabouts I was speaking to another Newcastle United fan and his NUFC friend in a wheelchair, as we were talking they told me that on their arrival they had been told that the bag on the chair was too big and he had to take it back to his car or pay £10, it was a urine bag for the disabled lad in the wheelchair but he went back and put it in the car. They then tried to gain access to the disabled toilet in the bar at the side of the entrance to the stage and was told his wheelchair was too big, also told too many people were in the way, so sent him away from the disabled toilet. 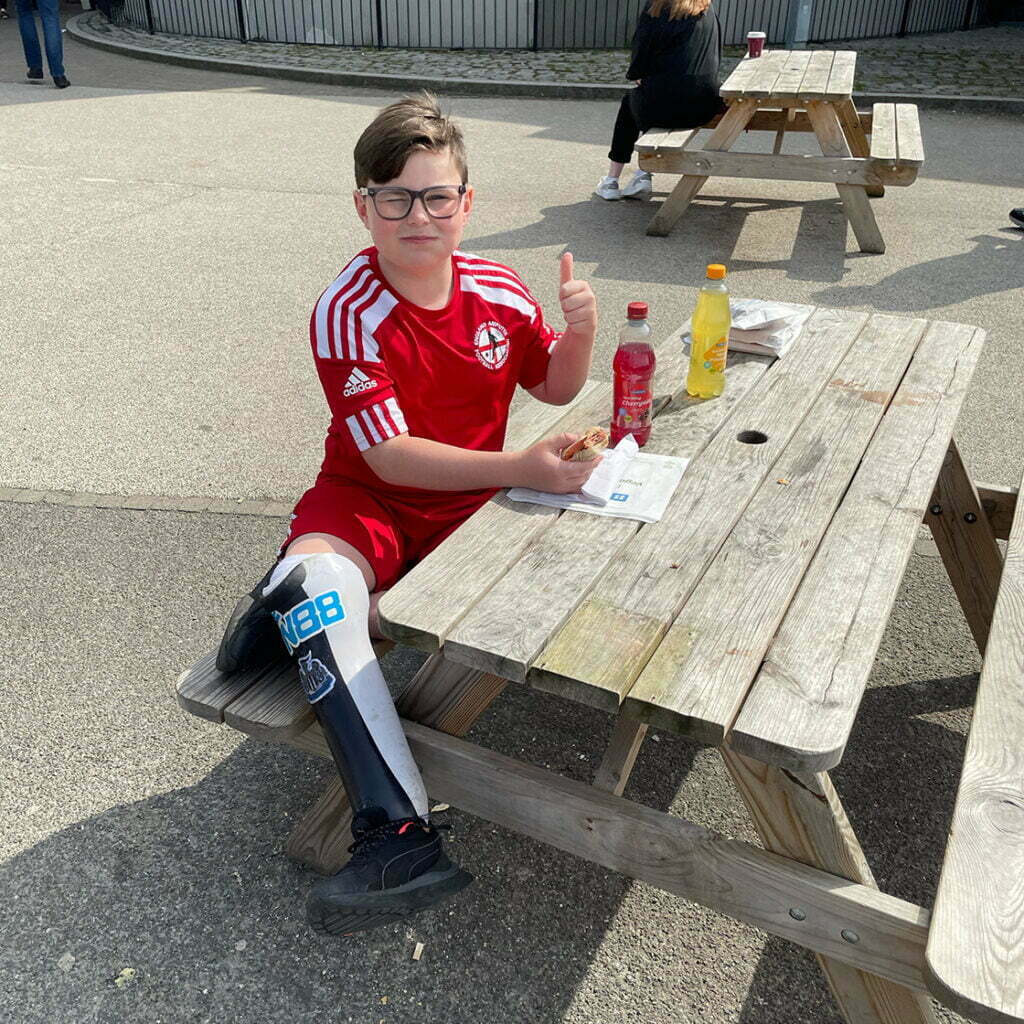 The next day I reported this to kick it out and reported a hate crime to GMP. I have since spoken to a contact at Manchester City. She rang us all individually and apologised.

This was three weeks ago now. I tried to contact the lady at City but she said that she was off on the sick, so we were to ring her stand in and he will let us know what’s happening.

Our official volunteer rang him and she said he couldn’t have been more rude and laughed at her, saying what proof do you have? Have you recorded these conversations and so on, then laughed again.

I cannot believe the blatant discrimination and abuse we have received from some of the staff at Manchester City.

Please help me highlight this, as they just don’t seem to care. Discrimination against anybody, never mind children, is disgusting.

If you haven’t got anything nice to say, please don’t comment, as this is a real story about a real 10 year old boy and his amputee friends.

(***If anybody would like to make a donation to help get some of the kids representing England to the football camp in Tblisi, who due to finances wouldn’t be able to get there otherwise, please go HERE to donate)