In what is a statement of intent, Newcastle United have recruited Dan Ashworth, a 51-year-old football mastermind who resigned from his technical director role at Brighton in February this year.

In what is Newcastle’s first executive appointment post-takeover, Dan will bring an immediate impact and wealth of international and domestic football expertise.

Dan spent six years as the English FA’s technical director before taking up residence at Brighton. Where he has had an ongoing impact on the trajectory of the club. Who had a fantastic 2021/2022 campaign.

Just what can Newcastle United expect from Dan Ashworth?

Often times Gareth Southgate is credited as the face of the England national team and rightly so, considering England’s recent impressive showings at the Euros and World Cup.

However, even Southgate himself has given credence to the Wizard of Oz behind the scenes in Ashworth, in what was a complete transformation at the association.

Further, Mike Rigg, the former head of player acquisitions at Manchester City, worked with Ashworth as the head of talent management at the FA:

“When Dan went in, it would not be unfair to say that the FA were not fulfilling their potential.

“Not only has he fundamentally changed the direction of the FA and put them on the path to where they are now but he has been involved in every level of coach education.

“They revamped the coaching awards. They completely reorganised the staffing structure and brought a high level of professionalism. He was also very hands-on with the national teams.”

Known as a visionary with strong analytical skills and armed with a grand chess ‘masters’ in football strategy. Dan was the implementer of England’s DNA. That revolutionised the national squad from the youth to the senior team.

What can we expect at a high level from a ‘Dan Ashworth’ DNA Strategy at Newcastle United?

Here is a summary of what the England DNA report suggested for playing style:

3: Sense Changing Moments in the Game

For more of a club-based context, How did Dan implement a similar strategy at Brighton into a top 10 club in just six transfer windows?

Ashworth brought 22 players to the club, while 30 players have left. The incomings cost an estimated £157.46 million with an estimated £89.76 million being brought in through sales, leading to a net spend of £67.7 million.

He was not afraid to make some bigger signings in the role, breaking the previous transfer record 4 times in his tenure. With a primary focus on youthful players: 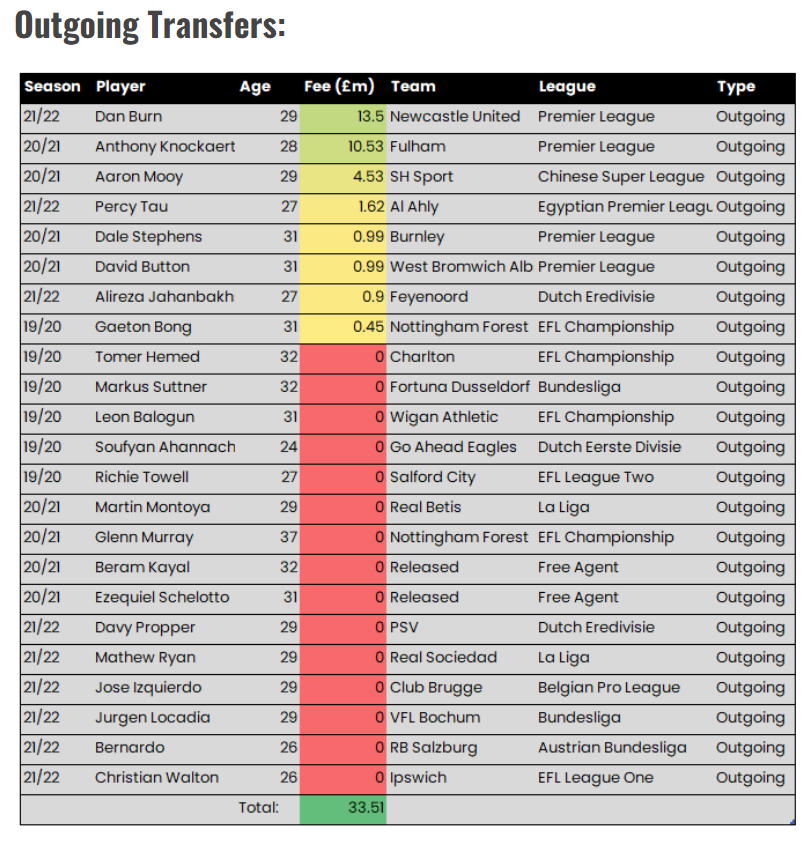 All but eight of the 23 players in this group ended up moving to clubs outside of the top five leagues. It is clear these players were allowed to leave because they did not fit the DNA and couldn’t progress Brighton to the lofty heights that matched their ambition.

Dan, not one afraid to make the big decisions, Alireza Jahanbakhsh was promptly sold, the club’s record transfer, who was purchased for £17.1 million in the summer before Ashworth joined the club.

Despite the 21 goals and 12 assists he contributed for AZ Alkmaar in the Eredivisie the season before, he failed to deliver in the Premier League and was swiftly moved on by Dan Ashworth, highlighting the incisive decision making required at this level.

Jahanbakhsh was only three years into a five-year deal at Brighton, when he was sold to Feyenoord for a fee of less than £1 million. 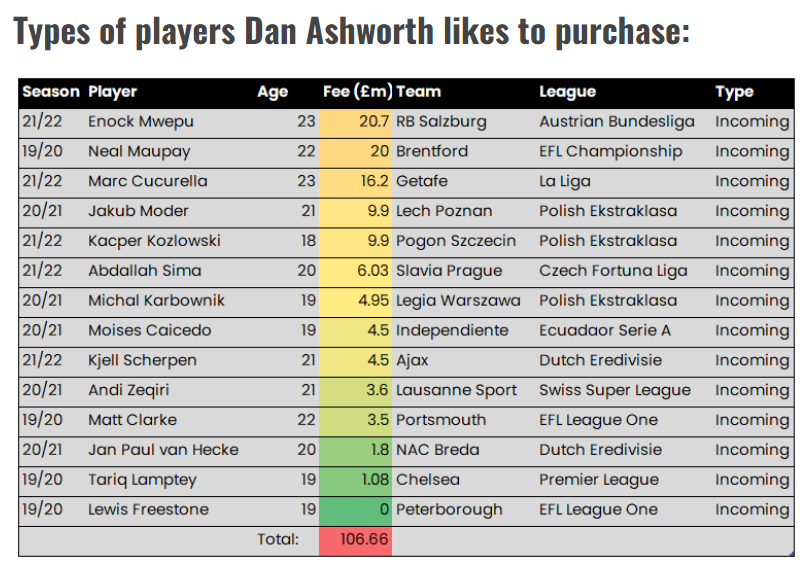 Only Tariq Lamptey and Marc Cucurella were signed from Europe’s top five leagues. Brighton were able to offer Lamptey, an elite player, regular minutes, which he was desperate for with players ahead of him at Chelsea.

Dan utilised his scouting network and prowess to prioritise top prospects in lesser leagues. With these signings, there is a risk that the player won’t make the step-up in quality.

However, the risk reward ratio is stable with the transfer fees significantly lower that the top five European leagues.

Additionally, the players signed have an average age of just under 23 years old, they are able to be moulded into players that are intelligent in possession and without possession and you guessed it. Will learn how to “sense changing moments in a game”.

Will Dan Ashworth continue to look in under-valued markets at Newcastle? Or with Newcastle’s spending power, focus more on Europe’s top leagues?

A combined approach will work well, especially with respect to youth.

We can expect these changes from DanAshworth:

A pragmatic approach to the transfer market

A focus on players under the age of 23

Players that are stars in their position

A focus on possession and regaining possession-based statistics

Who would you like to see Dan Ashworth bring in? Which players do you think Newcastle need to sign?