Sky Sports have been reporting on an astonishing day at St James Park.

The Manchester  United women’s team held the record for the highest league crowd of the season but that was overtaken on Tyneside, as fans responded to this first opportunity to see the NUFC Women’s team play at St James Park.

The 20,241 who turned up at Old Trafford for Manchester United against Everton in the Women’s Super League earlier this season, exceeded by the attendance of 22,134 fans, who saw the Newcastle United Women’s team beat Alnwick Town 4-0 in the National League Division One North. 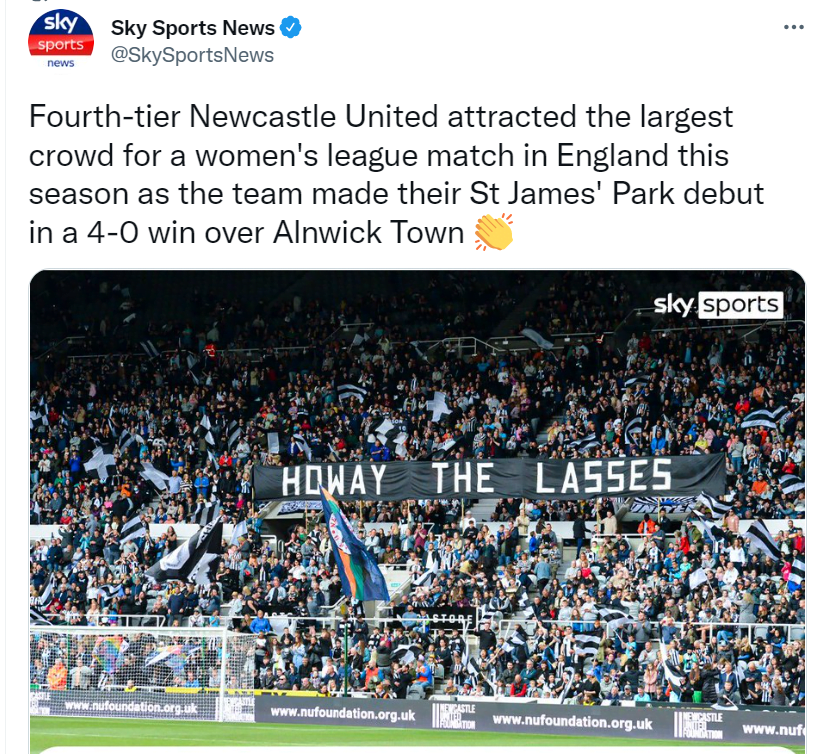 Well, surely a good news story all round. For women’s football in general and especially for the north east, this kind of crowd turning up to watch two local women’s teams and that attendance for a fourth tier match.

A day that suggests a great future ahead for women’s football on Tyneside, especially in the context of how women’s football is prospering generally, both internationally and domestically, with Newcastle United determined to support their women’s team all the way into the top tier Super League in the future.

It (women’s football) is of course still growing and has a long way to go in terms of fully getting to where it wants to be, but another great landmark yesterday at St James Park, apart from some bizarre Sunderland fans (and others) who reacted to the Sky Sports coverage like this, with Newcastle United supporters naturally putting them right…

‘(Sunderland fan) ‘Didn’t the same fan base organise continual protests against Mike Ashley? Do you not remember ‘When Rafa goes, we go’?’

‘Sunderland fans will always try to bring up moments from the past to comfort them cause they’re scared of whats coming in the future so they’ll cling onto Ashley and 6IAR. Personally, I like remembering all those dark times cause it makes me appreciate what we have now even more.’

‘Club owners that are known for making women second class citizens make it look like they care about womens football. What’s next week? A “we love journalists” roadshow? LBGTQ five a side?’

‘But but but six in a row, come on Sheffield Wednesday’

‘Blah blah blah… Negative attitude… Just enjoy the positive outcome this has had and stop diverting the attention from a great turn out and match played by Newcastle’s women’s team.’

‘Add this to the growing list of things to trigger the mackems.’

‘How come you only turn up when it’s free.’

‘A fourth tier womens game had a bigger crowd than Watford vs Burnley on Saturday in the biggest league on the planet.

That’s actually mental and a historic moment in my opinion.’

‘Almost every game at the Women’s Euros this summer is sold out (inc Old Trafford & Wembley), Barca women have sold out Camp Nou twice in a row, & millions watch WSL games on TV every week.’

‘I was at the Nou camp last week for their women’s champions league semi final in front of 91.600.’

‘So was I, but Barça is right now the best team in the world, and the city and surroundings is like 10 times bigger than newcastle. To bring 22000 people in a 4th tier game is an incredible effort. Howay the lasses!!’

‘Even our 4th tier woman’s team have people in tears.’

‘Sky sports continue to be a head in the sand PR team for these blood smeared regimes.’

‘(Aston Villa fan) Goes to show the Geordies will watch anything.’