Indeed, much of this season has been very strange.

However, when it comes to goalscoring, these stats below are especially difficult to believe.

First of all, this is the current Premier League table on Wednesday (18 May 2022), with only four days to go until the season ends: 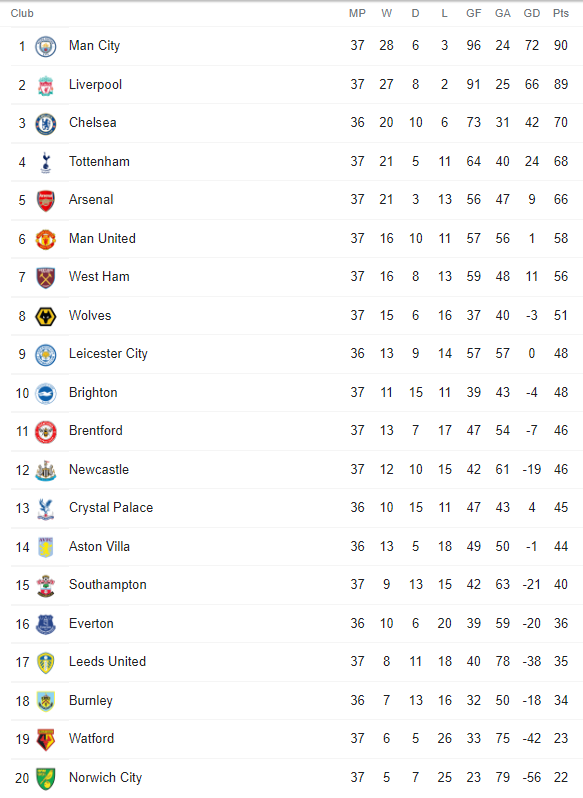 As you can see, Newcastle United have so far scored 42 goals in 37 Premier League matches, just that last game at Burnley to go.

Only seven of the other nineteen Premier League teams have scored less goals than NUFC.

However, have a look at how many different goalscorers each club have had in their Premier League matches:

Quite incredible that despite only 42 goals, no other Premier League club has had more than the 17 different goalscorers that Newcastle United have had.

Only Liverpool and Chelsea equal Newcastle’s 17 different goalscorers, but respectively, they have scored 49 and 31 more PL goals this season than Newcastle United.

If Newcastle are to end up with more than 17 different Premier League goalscorers this season, then these look to be the players (who so far haven’t scored this season) who could potentially score against Burnley – Burn, Gayle, Targett, Fernandez, Dummett, Krafth and Ritchie.

Only four Newcastle United players have scored more than two goals in the Premier League this season, they are Callum Wilson (6), Bruno G (5), Allan Saint-Maximin (5) and Joelinton (4).

Which then brings us to an unwanted record that is looming.

Unless Wilson scores, or ASM or Bruno get two, or Joelinton gets a hat-trick, at Burnley, then this season will join an infamous list.

Only twice have Newcastle United ended up with a top scorer, who finishes the season with less than seven league goals.

In 1997/98 John Barnes topped the NUFC league goals totals with six, then in 2000/01 two players tied with six league goals each – Carl Cort and Nobby Solano.

Callum Wilson looked sharp on Monday night against Arsenal when making his first start in five months, unlucky not to get on the scoresheet with a couple of cracking efforts. Here’s hoping he can change that on Sunday and end the season on a personal as well as team high (and keep all of his teeth as well!).