There continues to be much discussion on Allan Saint-Maximin.

With thoughts turning to next season, how important a role, if indeed any, will the Frenchman play for Newcastle United.

Interesting to evaluate the contribution of Allan Saint-Maximin over the course of this current season and an excellent new report has presented itself from the Other 14.

This table from the Other 14, who specialise in stats on clubs and players who aren’t the ‘big six’ clubs and players in the Premier League, compares ASM stats in the first half of the season compared to the second half. 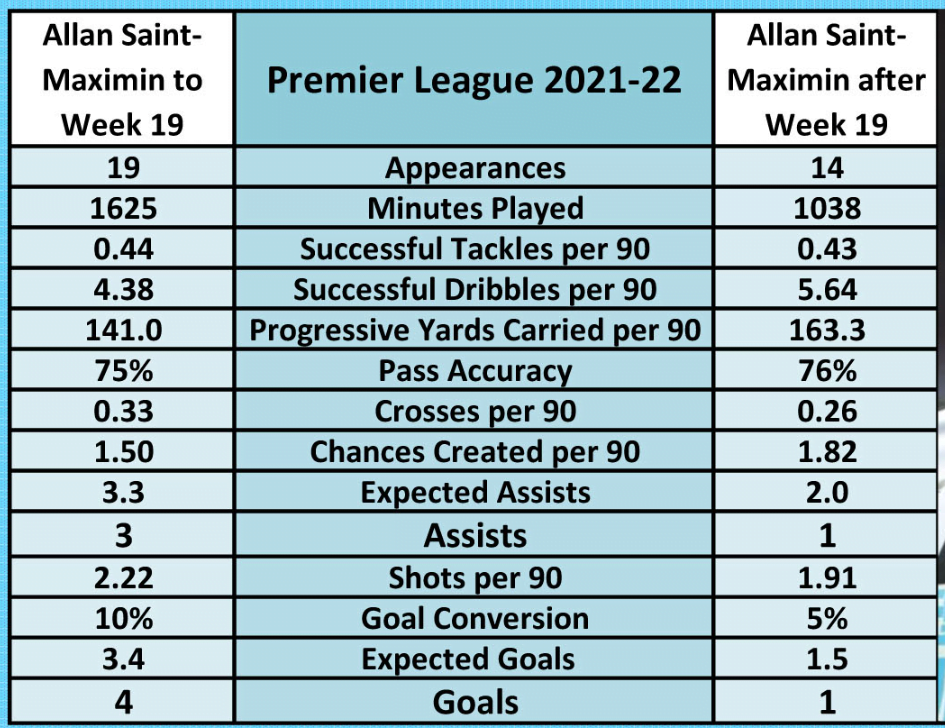 When looking at the respective stats above, you do have to take into account the fact that due mainly to injury / illness, Allan Saint-Maximin has so far started only 11 games in the second half of the season, compared to 18 of the first 19 (only not starting the 4-0 home defeat to Man City.

The first 19 PL games were those up to and including the 1-1 draw with Man Utd at St James Park.

I think what strikes me, is that the underlying stats are no different, or even better, in the second half of the season. By which I mean on average, ASM is having more successful dribbles, carrying the ball more progressive yards, even marginally better pass accuracy.

Allan Saint-Maximin scored his fourth goal of the season in the 1-1 Man Utd game where Callum Wilson got injured and after that match ASM scored against Watford  at home in January and has had only one assist since that Man U match as well.

I can’t help but think that whilst Chris Wood has undoubtedly done a very good job in helping the team go on that run of 10 wins in 14 PL games that took United to safety. His introduction and / or the different way Eddie Howe has set up the team, may not have suited Allan Saint-Maximin.

Just speculating of course…but I have a feeling that having a striker like Callum Wilson and the movement and runs he makes, may well fit better with Allan Saint-Maximin.

Something to think about anyway.