Thousands of Leicester fans are looking forward to a trip to Holland on Thursday for their European quarter-final second-leg against PSV Eindhoven.

However, it doesn’t look as though quite so many are too keen on a trip up the road to Tyneside three days later.

Sunday’s match was sold out for Newcastle United supporters but now on Monday some extra tickets have gone on sale, up in Level 7 at the Leazes end in seats that were originally set aside for Leicester fans.

Get in quick as they will go fast, or they may even have gone already by the time you read this.

Similarly, whilst at one point it looked as though that was it for NUFC fans and tickets for the Palace match a week on Wednesday, there are now tickets available to Newcastle supporters once again.

Like the ones originally set aside for Leicester fans, these bonus Newcastle tickets are also up in Level 7 of the Leazes where Palace fans should be. Newcastle United are putting them on sale section by section, so no idea just how many sections will eventually be available due to Palace fans knocking back the idea of a trip to Newcastle (even though their club provide free coach travel to all season ticket holders and members who buy NUFC away tickets). Once again, get in quick to avoid disappointment if you want tickets for that Palace game in nine days time.

As for the other two remaining home matches, the Newcastle United ticketing site has the following guidance:

Newcastle v Liverpool (game is on Saturday 30 April with a 12.30pm kick-off)

On sale to Season Ticket Holders and Members from Wednesday 13th April, 10am

Limit is 2 tickets per supporter

On sale to Season Ticket Holders and Members from Tuesday 26th April, 10am

Online general sale from Tuesday 3rd May, 10am (subject to availability)

The limit is 2 tickets per supporter.

To buy Newcastle United home tickets and / or get more info, go HERE to the official NUFC ticketing site.

Newcastle United had announced that Newcastle v Liverpool tickets would go on sale at 10am on Thursday 7 April 2022.

It was always going to be a busy one with tickets in great demand, with many Newcastle United fans met with a similar message to this one that a friend of mine got… 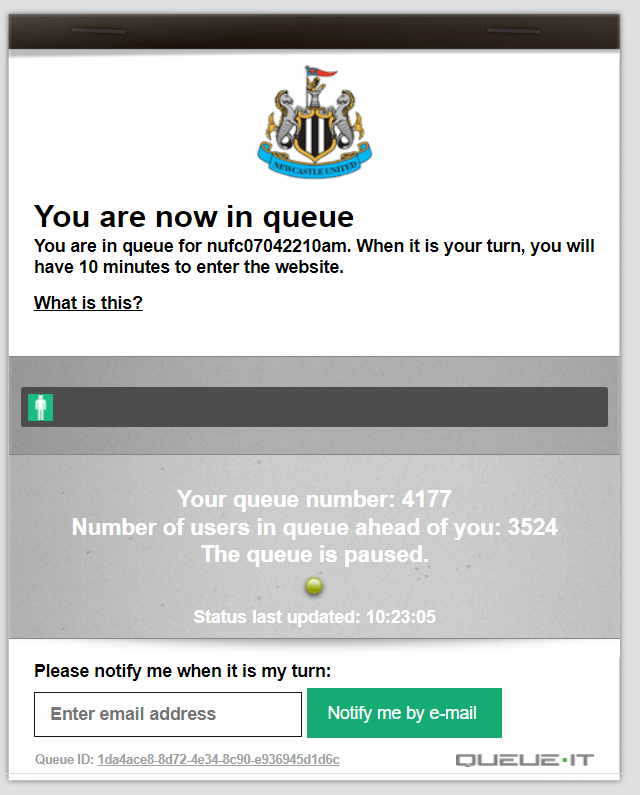 However, after Newcastle fans logged on to (try to!) buy Newcastle v Liverpool tickets, the club then posted the announcement below on the official website, saying ‘technical difficulties’ had led to the postponement of the ticket sale to Wednesday (13 April 2022).

Tickets for Newcastle United’s Premier League clash with Liverpool will go on sale to Members next week.

The title-chasing Reds come to St. James’ Park on Saturday, 30th April for a 12.30pm (BST) kick-off and the game is a category AA fixture, with tickets only released to Members. Sales were due to open at 10am on Thursday, 7th April but due to technical difficulties, they will now go on sale to Members at 10am on Wednesday, 13th April. The club apologues for any inconvenience.

Supporters are reminded that book.nufc.co.uk is the only official place to purchase official general admission match tickets. This sale is strictly for home supporters only and subject to Newcastle United’s terms and conditions of entry. Abuse of these terms may result in the cancellation and withdrawal of your season ticket and or membership and admission to this fixture refused.

Single match ticket holders and season ticket holders are in breach of the terms and conditions in the event of re-selling or any unauthorised transfers. Any ticket that is not purchased in a valid manner may be cancelled and no refund given. Tickets obtained in any other manner are done so at the risk of the individual purchaser.