I had a great night against Wolverhampton on Friday, my mate Andy was up for the game with his son Adam, whose fanatical obsession with Newcastle United might have some correlation with the fact that he’s my godson.

This was most definitely up there as one of Adam’s better trips, as he got to see his first win since pre-lockdown (having started to develop a reputation as a bit of a Jonah, especially after Cambridge), then of course make the traditional pilgrimage to the club shop, delayed until Saturday morning given the late kick off time.

A fantastic offer of £20 for a junior shirt with free printing was too good to ignore, both Adam and my son Blake made a beeline for the ‘Joy Division’ black and gold shirt. After the exhilaration of the game the previous night there was one stand-out name they both wanted, so away we went with a pair of freshly pressed tops with “Bruno G. 39” on the back.

Just being in the club shop was heartening for me. I had rarely ventured in here in the past decade but have been in countless times the last six months. I’m already planning a trip to the new Metrocentre shop to pick up some end of season bargains for my holidays (I too have got an eye on that Joy Division effort) and it feels great to be in there without the stigma of contributing to the club’s existential misery, with the stench of hopelessness that would emanate from every Day-Glo green or yellow 25% off tag (although to my knowledge an offer as good as the £20 with printing was never seen under the previous miserly regime). 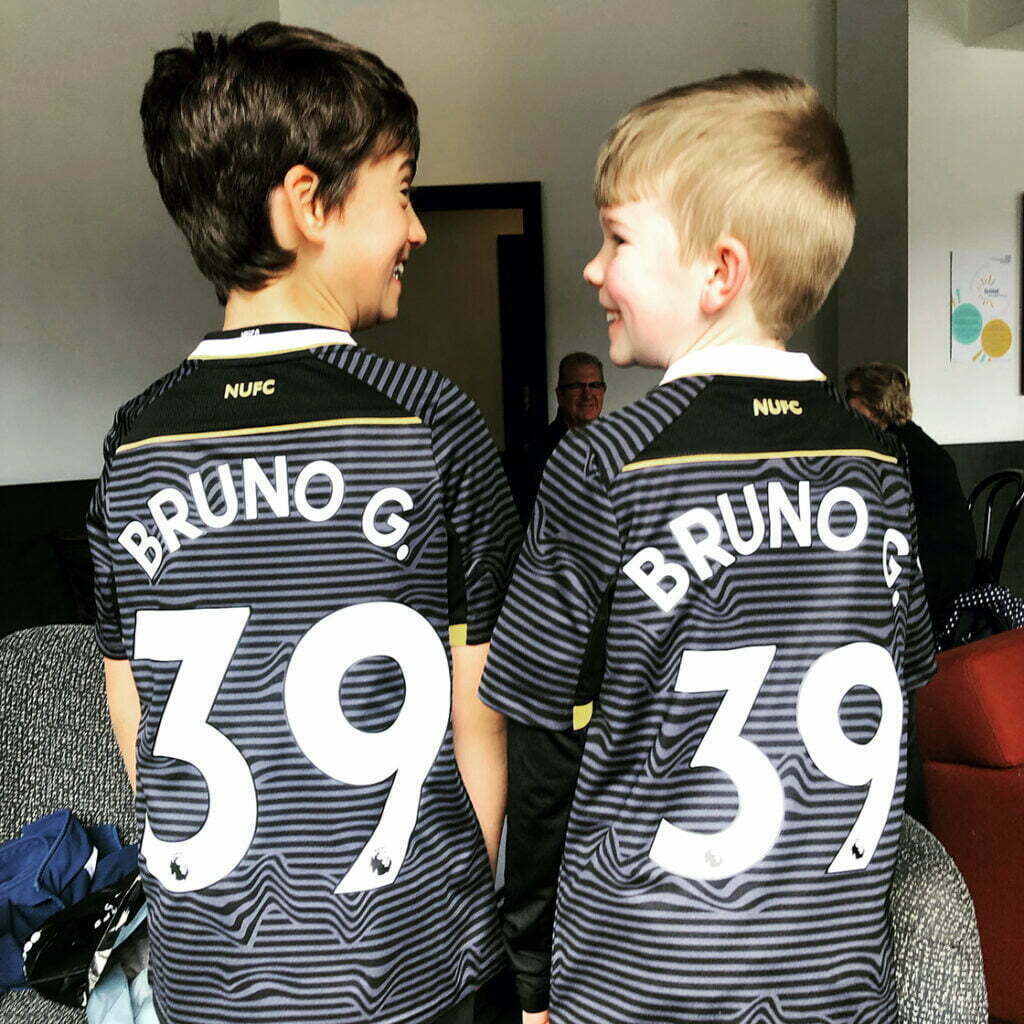 The shop was full of like-minded folk, potentially also feeling freed from the conflict and able to splurge money on Newcastle United car seat covers and garden gnomes. It helps to know that the increased money spent is a direct transaction to the club accounts, perhaps unnecessary given the means of those in charge, but a useful boost to income when considering Financial Fair Play.

It’s bigger than just raw consumerism though. The kids were genuinely happy, that buzz you get at a certain age at getting a new football shirt enhanced by the thrill of just having seen the man you were honouring on it bring in an important and uplifting win.

For too long our kids have had to put up with a raw deal. Little ‘uns don’t comprehend politics and wouldn’t have understood not going to the game because of Ashley. Those that were taken, willingly or begrudgingly, had to endure a decent proportion of disappointing experiences played out in a flat atmosphere. Contrast that with the chest thumping noise of Friday.

Now, we can look forward with Newcastle United.

Far from being able to call on the simple pleasure of a home win in a ground of people that are vociferously and expressively all pulling in the same direction, bigger dreams may await Adam, Blake and all of us that have endured the disappointment for far longer. Trips to Wembley are surely not beyond the realm of possibility in the next two or three years. Travel to some of Europe’s most exciting cities for enormous, prestigious matches could well be the norm by the time these lads are buying their own tickets. And yes, this generation can have confidence that they will almost certainly see Newcastle United win something of note, an experience I had tragically sat and pondered if I would ever see before the bell tolls, as recently as last summer.

Now, we get to look forward with heart and hope. I still want one more win to be certain, but defeats for Watford and Burnley are starting to make any thoughts of bottom three look like the paranoid ramblings of a dangerous maniac. The takeover has been uplifting in so many ways, but has carried the caveat of the possibility of Mike and Brucie’s toxic legacy derailing things for a few years while we were forced to bounce back from the Championship. Soon, there will be an occasion where relegation is mathematically impossible and I hope it’s at St James’ where it will be accompanied by a visceral roar, a release of tension symbolic of the last shackle being broken off.

I feel an extra sense of relief in relation to Adam, as supporting Newcastle seemed for so long like a curse to burden him with. Outside of the area and being exposed to the fickle insecurities of the modern day (online?) football fan, there could have been tough times ahead. Now he gets the double win of supporting a side that may actually create more happy times than it takes away, while being able to prove that he did his time in the dark days before it was cool (do the kids still say cool? Maybe I mean groovy).

I hope everyone can take the joy and shut out the noise. The pointed focus on ownership that is hyper-examining our small role in a capitalist world that is eating itself will snowball, along with salty remarks from keyboard tough guys, supporting “Chelsea, Messi and LA Lakers” that overstep the mark in many cases from the comfort of internet anonymity. Noise that should never wound enough to create personal distress. Maybe we’ll need to grow a thicker skin at times, but I’m going to say something I’ve wrestled with for weeks…and not felt comfortable with until now:

We are safe and the future’s bright. You absolutely deserve to enjoy it, all of you. I’ll be there to remind you in the pulsating buzzing ecstasy of the town when we bring that first trophy back and yes, you can buy me a pint. Cheers.