The Premier League top half could be now set to open up for Newcastle United.

The win over Wolves was very welcome, as a determined Eddie Howe NUFC side eventually got the goal their performance deserved.

A welcome return to St James Park, after a shocker of a match schedule saw Newcastle play their previous three matches all away from home, with indeed six of their last seven (before the Wolves one) having been played away.

Now in a run of three games in a row at home, whisper it quietly but now serious distractions elsewhere for their opponents could open up a path to top half of Premier League for Newcastle United.

If all goes to plan in these next two home matches, it would then mean that in 2022, Newcastle United would have beaten every single team that is currently between eighth and sixteenth in the Premier League…

This is how the current Premier League table looks now on Sunday (10 April 2022) morning: 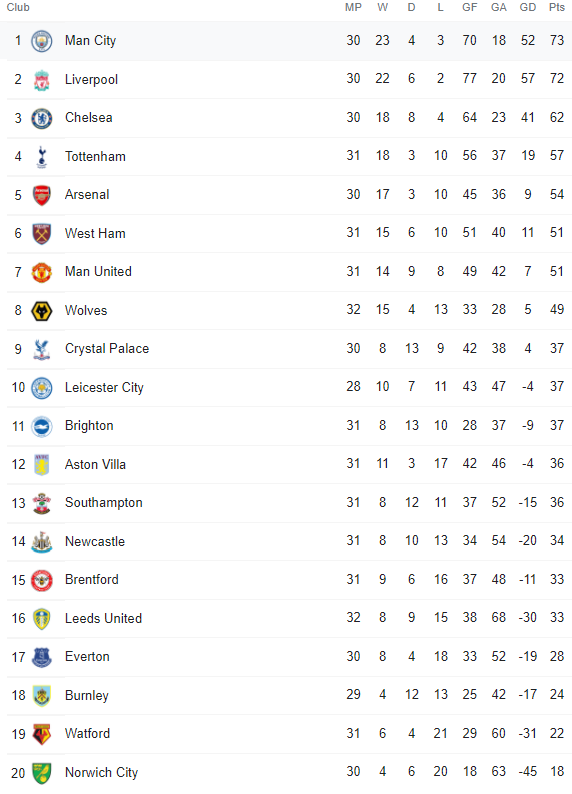 Results so far at the bottom end haven’t really helped Newcastle United BUT in terms of opening up the possibility of a very surprise charge into the top half, you couldn’t have asked for much more, both this weekend and generally recently.

Brighton did get a very surprising win at Arsenal but that makes it only four points they have picked up in their last eight matches.

Aston Villa made it four defeats in a row with that four goal hammering at home by Spurs.

Whilst for Southampton it is one point from their last five matches, as they saw six conceded at home to Chelsea yesterday.

Newcastle United have also very much helped themselves in recent times when it comes to raising the small chances of making top half, as in the last two months NUFC have beaten all of Southampton, Brighton and Villa, the three clubs currently directly above them.

Newcastle having in their next two games the pair of teams above that trio in ninth and tenth, Leicester and Palace who meet each other today.

Anyway, I think that now fate is playing its hand in Newcastle’s favour at last when it comes to the match scheduling, let me explain.

The Foxes have nothing at all to play for in the league, 37 points make them safe and no chance of finishing even top eight. They do however play this Thursday night, kicking off over in Eindhoven at 5.45pm in their Europa Conference League quarter-final, Leicester will throw absolutely everything at this game in the hope of a European semi-final to go for, the game perfectly poised after a 0-0 scoreline in the first leg. That match in Holland will finish (unless extra time needed…) around 8pm, only some 66 hours before the NUFC game kicks off against Leicester on Sunday. In contrast, Eddie Howe will have had fully nine days to prepare his team. Surely a serious advantage.

Speaking of distractions…Crystal Palace in exactly the same position as Leicester, 37 points putting them safe already but no chance of catching the top eight. The Eagles have an arguably even greater distraction than the Foxes, as after the Newcastle match finishes next Sunday against Leicester, Palace kick-off at 4.30pm against Chelsea at Wembley, Patrick Vieira and his players will absolutely be throwing the lot at this match, with the chance of a possible FA Cup final and glory. That game only three days later at St James Park will be the last thing on their minds.

With one point from their last seven matches and 16 points adrift of Newcastle, Norwich are effectively already down. They play Burnley today and then Man Utd away, before facing NUFC in their sixth last game of the season on Saturday 23 April. Unless a miracle happens I think Norwich very much will have accepted they are down by then and their distraction will be looking ahead to the Championship next season. Teams in their position often then stop playing loan signings, as they instead want to have a look at other (not so good) squad players who will be needed the next season in the Championship. That taking precedence over what happens in these remaining largely pointless matches for Norwich.

It is unbelievable that Eddie Howe has got Newcastle United on a path to survival, never mind the fact that as I have outlined above, these next fixtures have given NUFC every chance of hitting 40 points with still five games to go, maybe even getting to 43 points with four matches left.

Obviously a tricky run-in after that but now a great opportunity to not only confirm safety BUT also just maybe, head into that Liverpool game at St James Park with Newcastle United a top half of the table team.

How mad would that be???