Newcastle United not playing until Sunday but I was following the Premier League results on Saturday afternoon.

It is one of those rare weekends where none of the relegation candidates were / are playing each other.

A mixed bag of results with only two of the five relegation candidates losing.

This is how the table currently looks after the 12.30pm and 3pm Saturday Premier League results ahead of Tottenham v Newcastle and the rest of the weekend’s PL games: 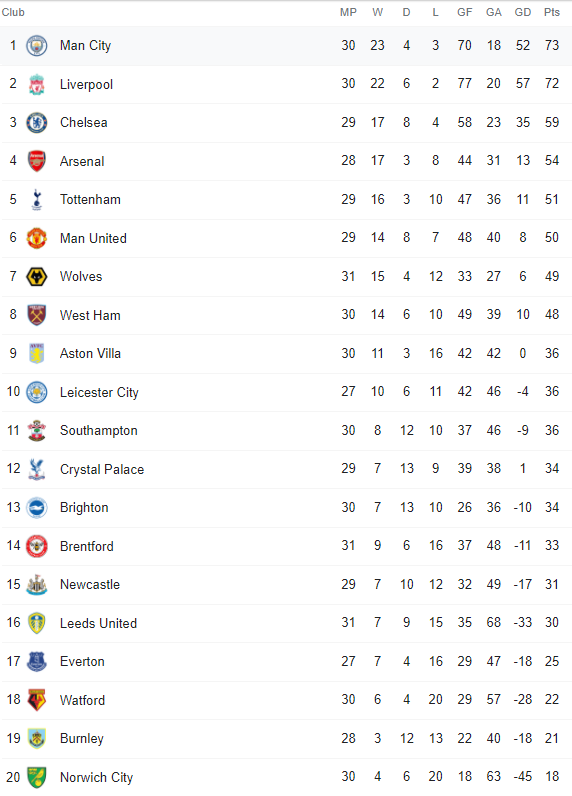 I don’t think Brentford were in any real danger of going down and good on them for going to Chelsea and smashing them, what a result!

Brentford go two points above Newcastle but have played two games more, Leeds also having played two more than NUFC and their draw against Southampton keeps them a point behind Eddie Howe and his team.

The bottom three didn’t score a goal between them and are looking increasingly likely to be the trio going down, unless Everton can gatecrash the party.

Norwich got an ok draw at Brighton but no good to them in their position and whilst Watford and Burnley may have been expected to lose against Liverpool and Man City, the fact remains that they are running out of games as the end of season draws near.

There are four games still to play out this weekend…

if Newcastle could beat Tottenham tomorrow, it would take them 12 points above the relegation zone and surely effectively on their way to certain safety.