Interesting to see the impact on the Premier League relegation odds after a very dramatic late win at St James Park on Sunday.

Bruno Guimaraes capping a man of the match performance with a first half equaliser and then stunning diving header to win it in the final minute of added time on top of the ninety.

Whilst at the same time, Burnley had taken the lead in the first half away at West Ham, before then the hammers equalising in the second half and that game ending in a 1-1 draw. 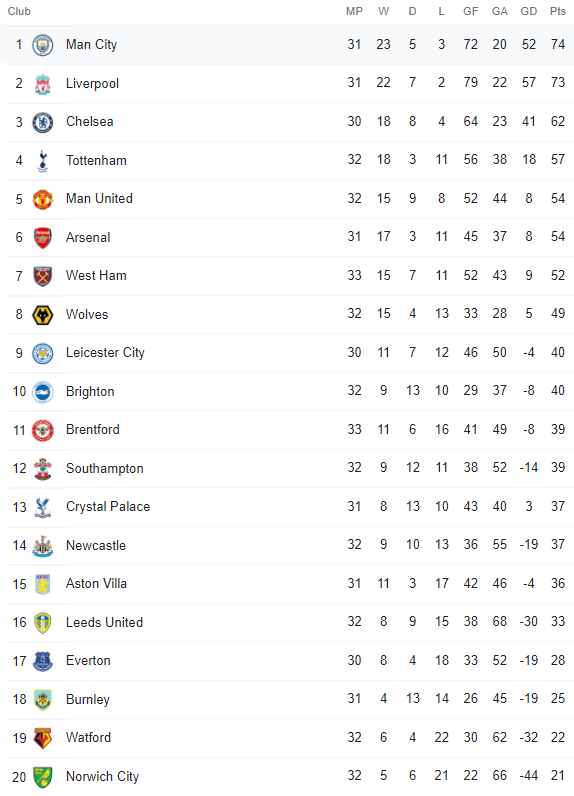 These are now the general Premier League relegation odds for the likely (and now unlikely…) candidates from various bookies after Newcastle United made it five home wins in a row:

Norwich (1/100) are seen as absolute certainties for the drop and Watford (1/50) then viewed as pretty much the same as well now. Those two clubs now 16 and 15 points respectively behind Newcastle United and both having only six games each to play.

In terms of catching Newcastle United, you have to think that Sunday afternoon was probably the final chance for Burnley to stand any chance of threatening NUFC. If Burnley had managed to hang onto their lead at West Ham and Newcastle fail to come back against Leicester, then there would have been only seven points between the two clubs and Burnley having a game in hand.

Burnley of course do still have a game in hand on Newcastle but are 12 points adrift and the currently manager-less Lancashire club only have seven games to turn it around.

More realistically, do Burnley still have a chance of getting above Everton?

Well, the bookies rate the odds of going down in that third relegation spot as now 4/11 Burnley and 5/2 Everton.

This midweek could prove pivotal to these two clubs, as Everton are home to Leicester on Wednesday night, before then Burnley are home to Southampton on Thursday night. If the scouse mackems lost and Burnley won, then the two clubs would swap places, though Everton having a game in hand. Of course, if the opposite were to happen and Burnley lose whilst Everton won, Frank Lampard’s side would be six points clear with a game in hand. With surely Burnley doomed if that latter scenario happened.

Jesse Marsch has done really well so far at Leeds, with ten points from their last four matches it sees the bookies make them 11/1 to go down, currently eight points above Burnley who have a game in hand on the Elland Road side.

These two home wins have sent Newcastle United out to a massive 175/1 to go down, Burnley (as well as Norwich and Watford, plus potentially Everton and Leeds as well) very unlikely to even catch the current 37 points Eddie Howe’s side are on. A win against Palace on Wednesday night would take NUFC to 40 points and surely absolutely certain safety.

These victories over Wolves and Leicester have opened the small possibility of a top half finish for Newcastle United and this next week’s matches at home to Palace and away at Norwich, would surely need another two NUFC wins to keep those hopes as a realistic possibility. The odds on the various clubs getting the remaining two (the top eight looking out of reach) top half places are: 1/4 Leicester, 5/4 Crystal Palace, 2/1 Brighton, 7/2 Aston Villa, 4/1 Southampton, 9/1 Brentford, 12/1 Newcastle United.