The Premier League relegation battle is really hotting up.

Newcastle United finding themselves dragged back into the struggle after three defeats on the bounce.

A tough game on Friday night with Europe chasing Wolves in toon, Eddie Howe and his players knowing anything but a win would leave them vulnerable to those below closing in – especially with four of the bottom five playing each other this weekend.

Ahead of Friday night, their computer model gave Wolves a 33% chance of a win, it was 29% for a draw and a 37% possibility of a Newcastle win (percentage probabilities rounded up/down to nearest whole number). So basically, Newcastle United rated at only around at just better than a one in three chance (37%) of winning and a two in three chance (66%) of avoiding defeat and getting a draw or better.

Well…Newcastle United both avoided defeat AND won last night, a very good disciplined performance beating a tough Wolves side who give so little away (fourth best defensive record in the Premier League).

However, having had to play those last games away from home and indeed only one home match the last seven weeks, Newcastle United were back on home turf and looked the better team throughout against Wolves, only a case of whether or not they could add the goal on top of that.

A brilliant counter-attacking move saw Newcastle United ‘do a Wolves’ and turn defence into attack in seconds, Chris Wood winning and then scoring the penalty to grab the three points.

This is how the Premier League table looks on Saturday morning after Newcastle’s win over Wolves and ahead of the rest of this weekend’s matches: 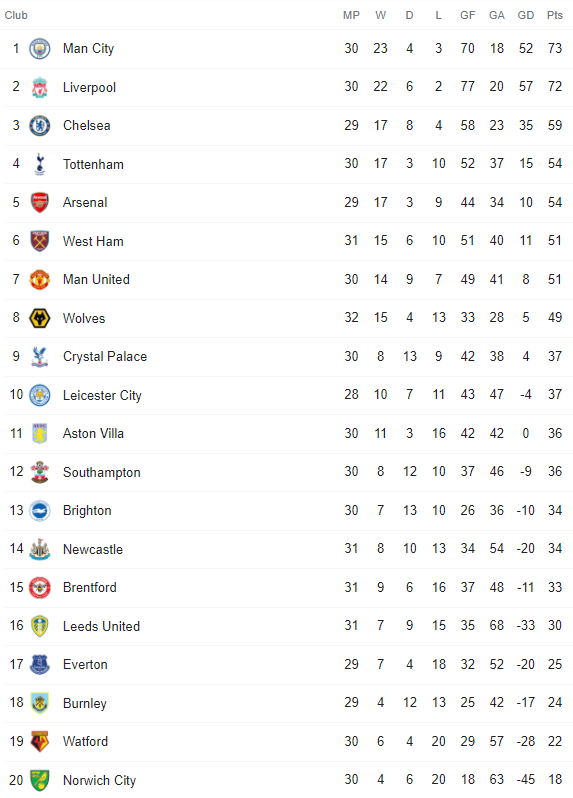 As you can see, Newcastle United move back above Brentford and most importantly ten points clear of the bottom three, though Burnley and fourth bottom Everton do have two games in hand each on NUFC.

Taking into account Friday night’s game, this is now how the computer model rates the percentage probability chances of relegation for Newcastle United and their rivals at this stage of the season…:

However, the third relegation spot all to play for and very interesting to see that Everton (50%) are seen as the most likely to join them. The scousers have a really tough schedule to end the season and in their last 23 Premier League matches have lost a massive 17 of them, winning only three.

Burnley (38%) massively boosted their chances of staying up with that late win over Everton on Wednesday and even though a point behind the blue scousers, are seen to have more of a chance of staying up due to an easier set of matches to end the season.

Leeds (26%) have picked up seven points in their last three games and are five and six points respectively above Everton and Burnley, however, that pair have two games in hand each on Leeds.

After Newcastle’s significant victory over Wolves, some massive other games at the bottom end, as Everton host Man Utd on Saturday lunchtime, before Watford v Leeds, then Norwich v Burnley on Sunday.

As for Newcastle United, only a 1% possibility of now going down, so only a one in a hundred chance according to the probability model, in other words, 99% sure of staying up. Brentford rated the same, as they are only one point behind Newcastle United and nine points clear of trouble as things now stand.