What makes a good (or bad) owner in this modern era of football in the English top tier?

Nick Harris is responsible for the excellent Sporting Intelligence website and Twitter account, which describes itself as: ‘A perpetually sceptical attempt to make sense of sport’s relationship with money. Interested in conmen and numbers. Reassuringly grumpy.’

In his latest venture, Nick wanted to, amongst other things, find out which Premier League owners were the most and least damaging to the health of English football.

Nick Harris asked via many independent Premier League club sites / social media, including The Mag, for fans to answer a multitude of questions.

Over 10,500 fans of the 20 Premier League clubs responded and as you can see below, you can find out where the  Newcastle United owners find themselves in the table of 20 clubs, when it comes to where PL supporters rank them as owners.

This is a brief explanation by Nick Harris of what, in part, he was setting out to try and achieve / discover:

‘What constitutes a good / bad owner in English football has been thrown under the spotlight in recent weeks by the ongoing chaos at Chelsea with Abramovich putting the club up for sale, and other geopolitical ownership issues.

These developments coincided with me overseeing a huge piece of research from late January and into last month about good & bad owners (initially in the Premier League); an independent regulator; and what fans really want from their clubs’ custodian.

More than 10,500 fans of Premier League clubs took part, at an average of more than 500 fans per club, answering questions from whether they think their owners have done a good [job], to whether they want a regulator and what powers it should have. SO MUCH DATA.’

This is the table of which were voted the most and least damaging Premier League owners by fans of all 20 clubs voting collectively: 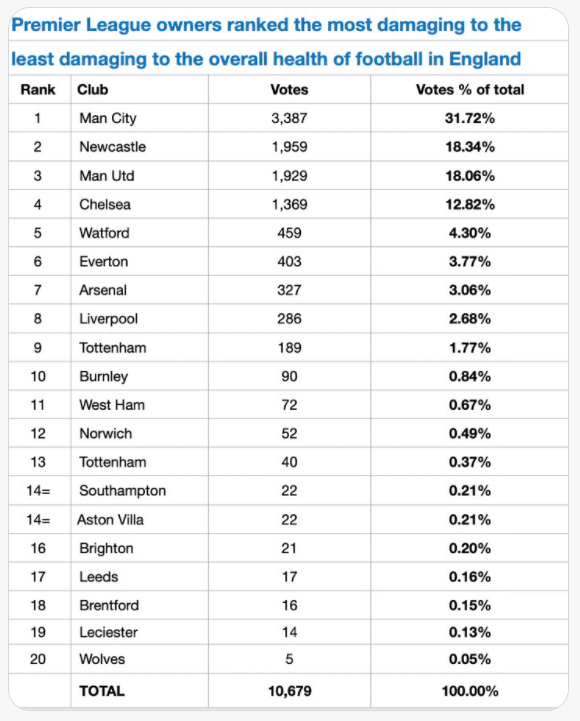 This is the response when Nick Harris / Sporting Intelligence asked fans of each Premier League club, whether in favour of independent regulator with power to stop nation states and SWFs (Sovereign Wealth Funds) from owning PL clubs: 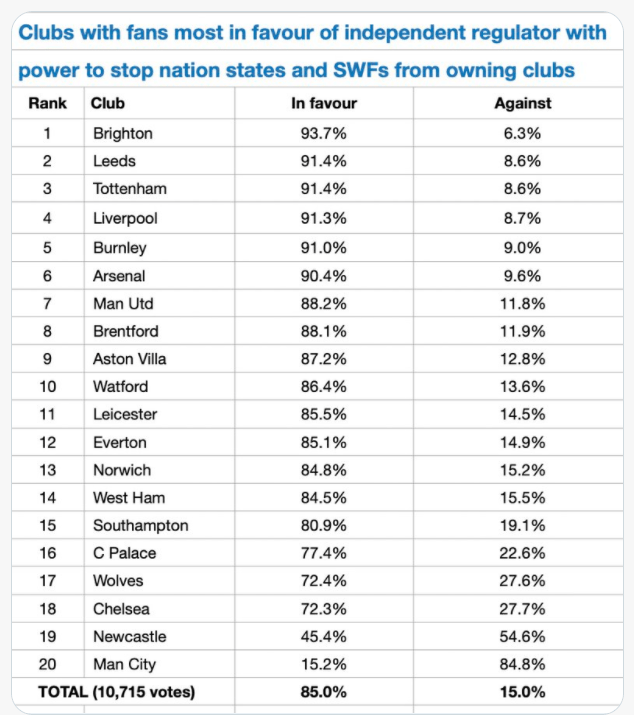 Maybe no surprise to see where Man City and Newcastle are in the table but a big disparity in terms of their respective percentages, only a small majority of NUFC fans who voted, being against an independent regulator having this power, compared to almost 85% of Man City fans.