However, I think this exchange on Saturday with Jeff Stelling takes the proverbial biscuit.

I was lying on the sofa watching Sky Sports ahead of the Saturday afternoon matches and when Jeff and the panel were previewing the games, Paul Merson came out with this bizarre classic…

“They [Aston Villa] have got a good team.

“They should be…you know…it is [lack of] consistency.

“You turn seven of them defeats into wins and they are fourth.”

“You could say that with any team couldn’t you.”

“Well not really because they have lost fifteen games.

“I’m not saying they are Man Utd and you change them seven defeats into seven wins.

“We are talking about not even half their defeats.”

“I know, but if Norwich had won seven of the games they have lost, they’d be safe in mid-table.”

This is how the Premier League table now looks, after Saturday’s matches: 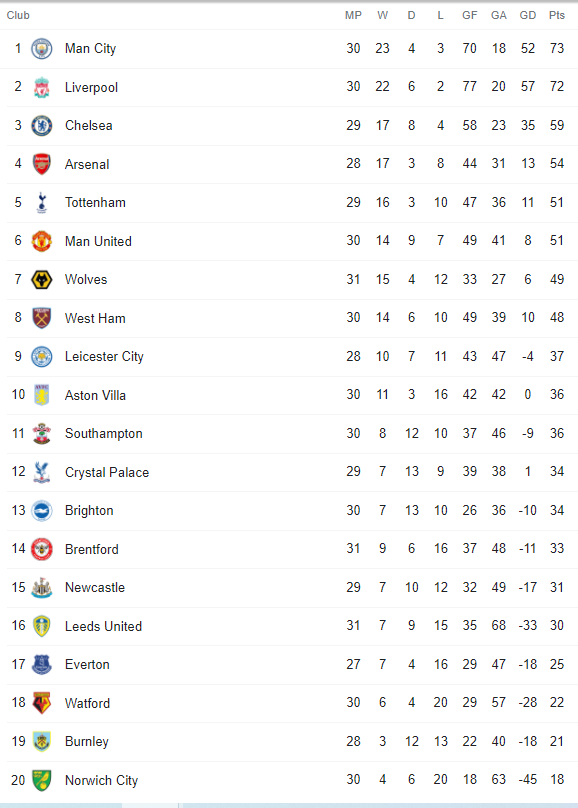 Indeed, only Watford and Norwich have lost more. Steven Gerrard got a lot of positive headlines when taking over at Villa but he has lost nine of his nineteen PL games in charge, including five of the last eight.

Paul Merson is of course a former Villa player and his bias towards the likes of them and Arsenal, frequently comes out in his comments. Merson may of course be correct in saying that Aston Villa have better players than Norwich but I think what this is a case of, is because Villa have name players such as Coutinho in their team, he (Paul Merson) automatically thinks they are a better side than they are in reality.

Even if you added 21 points (seven wins) onto Villa’s total, they would only scrape into fourth, three points ahead of Arsenal but the Gunners two games in hand. Indeed, if Newcastle beat Tottenham today, they would move only two points behind Villa and could also then say if only seven of this season’s defeats had been wins, NUFC would be top four!

There aren’t a big proportion of matches where you can say any club loses a serious amount of games they should have won, over the course of a season. The realistic and relevant thing for me, is looking at the number of games where there are small margins and whether you can turn defeats into draws and especially, draws into wins.

Last season, Leicester and West Ham ended up fifth and sixth, only drawing six and eight games respectively. The value showing of winning and losing, far better than regularly drawing.

Maybe the best example last season of a very average team in terms of quality that went all out to win and accepting this could also at times leave them open to likely defeat, was Leeds. They drew only five matches, winning 18 and losing 15, leaving them ninth and only six points off the top six and European football.

It is very amusing to see how well Eddie Howe has done at Newcastle United AND especially, how he has done it.

The usual idiot pundits and journalists saying you need a ‘big Sam’ to sort a team / defence out that had conceded 19 goals in their first eight Premier League games, under the clueless Steve Bruce. Graeme Jones then steadying the ship a little with five conceded in three and a couple of draws registered.

Much said about how supposedly Eddie Howe was at best tactically naive, at worst totally hopeless when trying to sort out the defensive side of things. The media then loving it when his first game in charge was a 3-3 draw against Brentford, wanting to portray this as a reckless team and tactics set-up for NUFC, when in reality Newcastle battered them and had loads of chances, should have won easily and would have done so, if not for two shocking mistakes from Karl Darlow that undermined the new Head Coach. This pattern continuing as individual mistakes let down much improved performances under Eddie Howe.

Once he had got his feet under the table though and made some outstanding signings with Trippier, Burn and Targett arriving for less than £30m outlay for the trio, the defending has been largely outstanding, only eight goals conceded in the last eleven Premier League matches and almost four months since more than one goal was conceded in a match.

More of the same today please for this visit to Tottenham!