In the pub on Friday night, somebody asked me a tricky Liverpool / Everton question.

Would I rather Newcastle United help stop Liverpool winning the Premier League by taking points off them today, or see Everton go down to the Championship?

I’d had a few and so I told my mate I would have to sleep on it before giving him my preference.

After both Liverpool and Everton played today, I have made my mind up.

I enjoyed our game against the red scousers today.

Sunshine, cracking flags display ahead of kick-off, lots of happy Newcastle United fans, just grateful to now have our club back after so many pointless years of Mike Ashley.

The Newcastle players, Eddie Howe, his coaching staff and so on, all pulling together with the fans. How good does it feel?

Quite incredible to think that less than seven months ago we had Mike Ashley, Steve Bruce and Lee Charnley still shaming our club, our city. None of them good enough for Newcastle United and whether in the stadium or watching on TV, feeling physically sick to have St James Park so cheapened with a staggering number of (free!) adverts benefiting the multi-billionaire and his retail empire shareholders.

Yes we lost today against Liverpool, but as Newcastle fans we see the bigger picture, where we have come from, where we are now, then most importantly…where we are heading.

We are on an upward trajectory and losing to arguably / probably the best team in the country, in Europe, the World, by a single goal, isn’t going to be spoiling my weekend.

Newcastle have lost four of their last seventeen Premier League matches, they have won 10 of the last 15.

Under Steve Bruce, NUFC lost six of their first nine games this season (all competitions) didn’t win a single one.

Losing / failure is all relative, the same as winning / success.

I came straight home after the game today, no post-match pub for me. Sometimes you have to compromise, well it is her birthday…off out for a meal tonight with the family and sometimes you do have to be relatively sensible.

What it did allow me to do, was to lie on the sofa and watch the 3pm kick-offs, see how they turned out via the Sky Sports coverage.

It was absolutely class!

Brighton won 3-0 at Wolves to knock us down to tenth but still top half for the moment, I’ll take that.

Zero surprise to see Norwich bite the dust, NUFC helped them on their way last weekend and today Aston Villa finished the job with a 2-0 win. The Canaries mathematically relegated now, after having been effectively doomed for months.

However, the big action was elsewhere, at Vicarage Road.

Only a win good enough to give Watford any realistic chance of staying up, whilst a chance for Burnley to put real daylight between them and the drop zone.

A Tarkowski own goal on eight minutes looked to have been enough to give Watford faint hope of survival but astonishing drama late on changed all that. This is where Sky Sports really come into their own.

Seven minutes left on the clock and Cork equalises, then only three minutes later it is a Brownhill winner! Chaos at Vicarage Road and in the Sky Sports studio.

I nearly fell off the sofa laughing, especially when I was thinking of all those bitter Everton fans also watching this afternoon’s action unfold.

Fair play to Burnley, sacking Sean Dyche was a massive shout and now to win three games in a row…incredible. Indeed, their last six games show four wins, one draw and just the one defeat, to rock bottom now relegated Norwich! You couldn’t make it up!!!

Just in case you weren’t aware of them, today’s 3pm kick-off results were:

That left the Premier League table looking like this at 5pm: 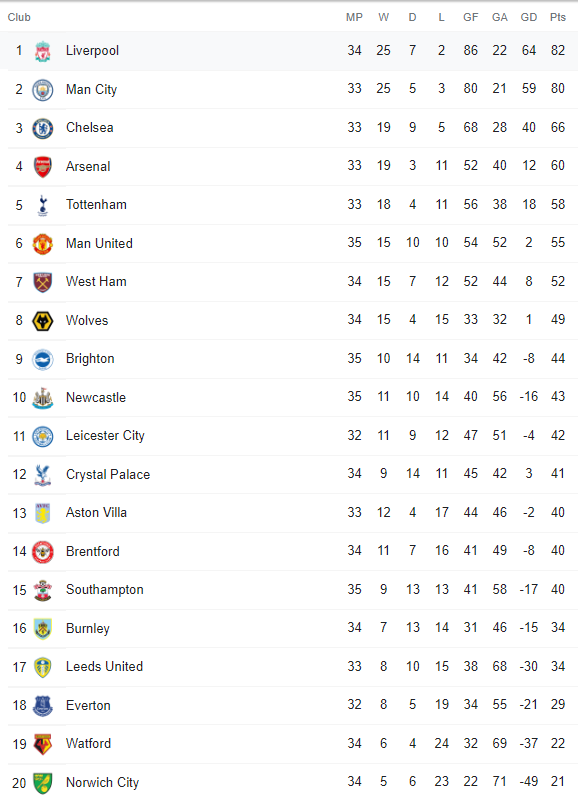 That five point gap looks like a chasm now, especially at this late stage.

I have heard and read pundits / journalists saying yes but look at the games in hand Everton have.

Hmmm, when a team has won only three of their last seventeen Premier League matches, four of their last twenty six, just how many games in hand would you need Everton to have, to give any confidence they can get out of this one?

They have to win two just to stand any chance of staying up. Under Rafa Benitez the scouse mackems won four of their first six PL games of the season and I have no doubt that if the Everton fans hadn’t forced him out, Rafa would have eventually turned it around. As we saw in his time at Newcastle, he finds a way to get the job done as the season progresses.

Everton have Chelsea at home tomorrow and I see that as another nail in their relegation coffin. It would leave only five games to turn around a five point deficit and Burnley have a six goal better GD, which would obviously increase if / when Chelsea win tomorrow.

Burnley have four games left, playing Aston Villa home and away, with a trip to Tottenham in between, before hosting Newcastle United on the final day of the season.

Having found a way to win all of these last three games and only conceding one goal as their usually impressive defence clicks back into gear, I simply can’t see them not picking up further points in their last four games.

I have a feeling that the relegation issue will be decided before the final day of the season, but if not, how would a feel about Newcastle United needing to lose to Burnley in order to make sure Everton went down?

No prizes for guessing based on the above but I now know for sure what I will be telling my mate the next time I see him.

As for Liverpool winning / not winning the title, well I have just checked and after 40 minutes Man City are 1-0 and look to be cruising to an away win at Leeds. Yes it would have been nice to deny Liverpool points today but I doubt very much that Pep Guardiola needs any help.

By the time Newcastle take to the pitch at the Etihad, Burnley will have played at home to Villa and Everton will have faced Leicester away. I honestly wouldn’t be surprised if by then Burnley are eight points clear of trouble and Everton with only four games remaining after defeat to both Chelsea and Leicester.

Frank Lampard maybe then looking to Leeds as his only possible salvation but I think under Jesse Marsch they are showing more than enough to be safe, however it ends up against Man City today.

I am switching over from football time to family time now and I’m in the mood tonight, to drink to Everton going down and Newcastle United set for far better times ahead.

Shots on target were Liverpool 10 Newcastle 2