Newcastle United have a very positive Saturday despite having no game

Newcastle United have to wait until 2.15pm on Sunday afternoon for their next game.

However, there were a number of other clubs, including those involved in the relegation battle, that were in action on Saturday.

The Premier League schedule affected to an extent by the FA Cup semi-finals, which saw Liverpool beat Man City 3-2 on Saturday afternoon, with then Crystal Palace taking on Chelsea tomorrow (Sunday) afternoon.

The four Premier League matches that did take place on Saturday, affected issues at both ends of the table.

The fixtures ending on Saturday afternoon:

That leaves the Premier League table looking like this, ahead of Sunday’s (17 April 2022) games: 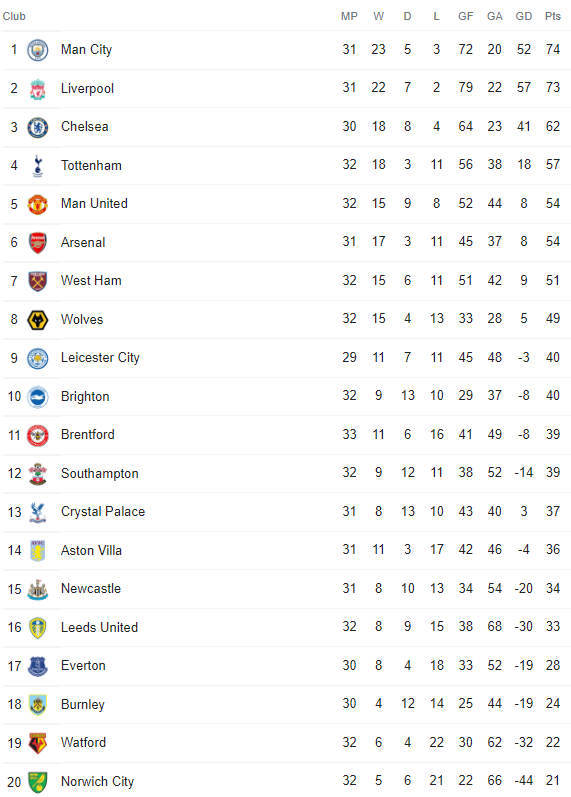 As you can see, for Man Utd, Arsenal and Tottenham, the race for fourth has further intensified due to today’s results.

However, more importantly, these Saturday afternoon results have helped to give a bit more clarity on the relegation picture.

Norwich fought back from 2-0 down to 2-2, whilst Watford also equalised for 1-1. However, ultimately both of them lost on Saturday, meaning the pair are both all but already down now. Plus, with only six game left, Watford and Norwich are respectively 12 and 13 points adrift of Newcastle United and both have significantly worse goal differences than NUFC, there is no way they are catching Eddie Howe’s side now.

Which now leaves only one possible danger for Newcastle United, the third relegation spot.

The two Premier League matches on Sunday both kick off at 2.15pm, with Newcastle v Leicester and West Ham v Burnley.

If Newcastle United beat Leicester then surely they are effectively safe. However, regardless of the Newcastle result, if manager-less Burnley lose to the Hammers, they will be 10+ points adrift of NUFC with only seven games to play. Very difficult seeing Burnley standing any chance of catching Eddie Howe and his team in that scenario.