As well as football pundits and media, as usual, tearing into the NUFC fanbase, supporters of pretty much every other club have been lining up to take the moral high ground.

It won’t happen…but remarkably, with four games each to go, it is still mathematically possible for Newcastle United to finish above Man U!

In his 23 PL games so far, Eddie Howe has accumulated 38 points, in their last 23 PL matches Man U have picked up 37 points. Quite incredible.

Fair play to Jeff, obviously one of the top boys amongst Manchester United fans when it comes to principles and moral fibre. God forbid if the Saudis ever came to try and buy the Old Trafford club… 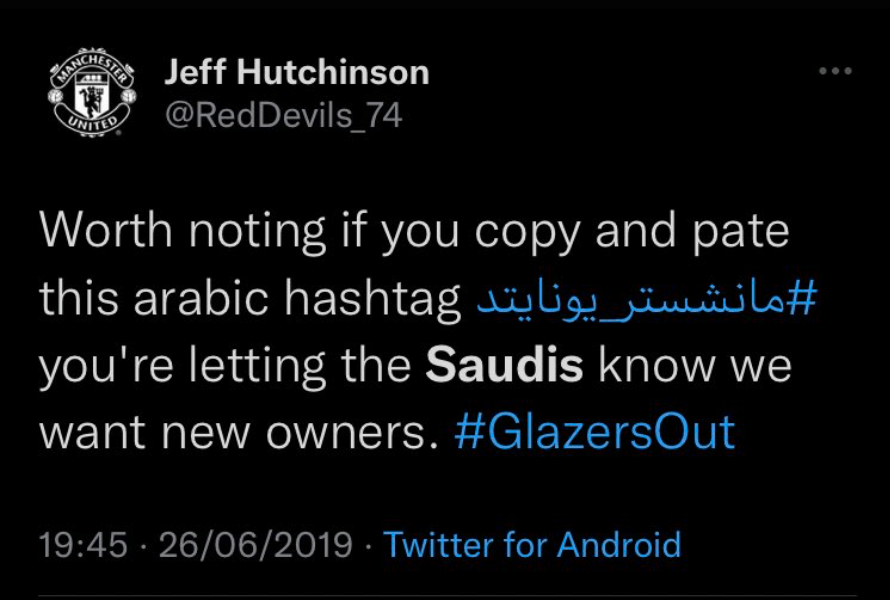 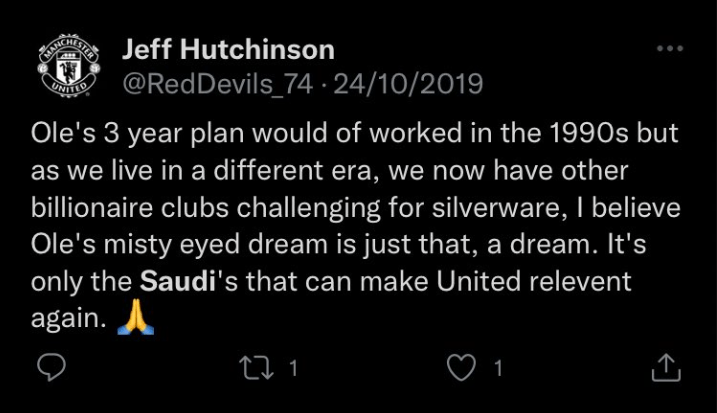 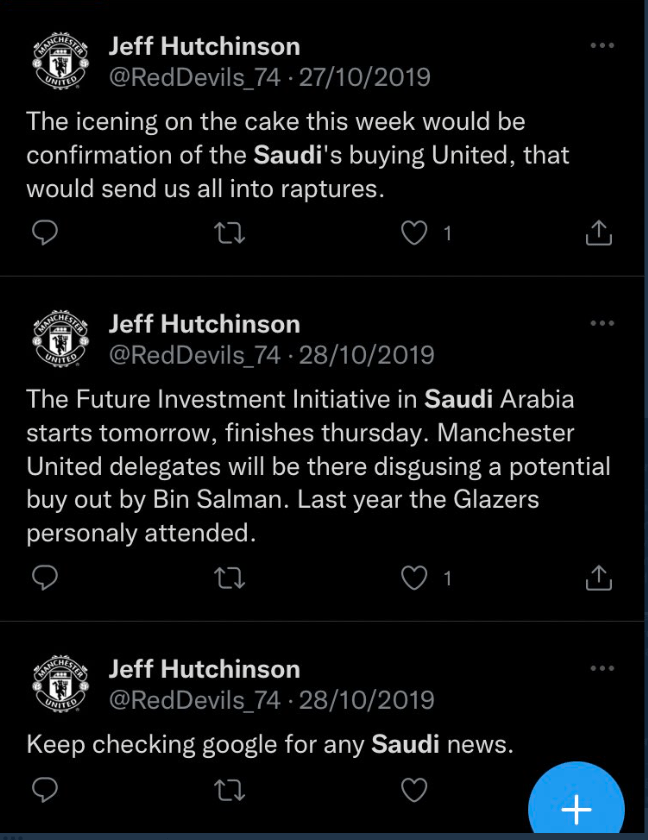 Once again, Manchester United fans have been arguably the very most vociferous in saying how shameful Newcastle United fans have been in celebrating the end of over 14 years of Mike Ashley, with the replacement being ambitious new owners, led by the Saudi Arabia PIF buying 80% of the club.

So many Manchester United fans (and those of other clubs) claiming they would stop supporting their club if the Saudis had taken over their club, how they wouldn’t stand for it, would be out demonstrating against these new owners rather than going to matches etc etc.

Back in 2018 and moving into 2019, when it was Man Utd who it was widely reported that the Saudis were trying to buy, with actually Mohammed Bin Salman himself potentially said to be personally going to buy the club, as opposed to through the Saudi PIF as the NUFC takeover has been.

A number of offers were widely reported to have been made as the Glazers held out against the Saudi dictator’s bids, with the issue continuing well on into 2019.

Indeed, it was still going on only a couple of months before Saudi interest in Newcastle United was first reported.

So when it was their club being targeted for a possible Saudi buyout, and by Mohammed Bin Salman himself, obviously Manchester United fans were all manning the barricades demanding that this buyout didn’t go through…

Well, exactly two years ago in October 2019, a newspaper poll asked Manchester United fans whether they supported a buyout by Saudi dictator Mohammed Bin Salman from the Glazer family.

Quite amazing isn’t it, how in less than three years, so many Manchester United fans (and others) have now found such high principles, where they actually claim they would stop supporting their club if under Saudi ownership, when in October 2019 it was so very different. Remember as well that whilst Newcastle had an owner in Mike Ashley who refused to let the club even try and win something, under the Glazers the Manchester United fans have seen 19 trophies won, including the Champions League and multiple Premier League titles.

It is almost as though it is so much easier to criticise when this kind of takeover is happening at another club. When it is hypothetical for fans of other clubs, it isn’t difficult to make out it would be a straightforward choice to stop going to games, stop supporting the club etc etc. It is also very much worth noting that whilst a number of journalists and media haven’t changed their stance at all, for so many others it was / is very different. If you go back a few years the media were treating a possible Saudi buyout of Man Utd in a VERY different way to how they reacted, once a possible takeover at Newcastle United might happen.

There again, is this any surprise when it comes to both media and Manchester United fans…

Where have their campaigning, outrage and principles been these past 14 years and counting, with the Saudi regime the longest existing sponsors of Man Utd.

The Saudi regime through the state owned Saudi Telecom have ploughed fortunes into Old Trafford for 14 years, since 2008, and continue to do so.

Then in 2017, Man Utd agreed yet another very lucrative revenue stream from the Saudi regime, ‘the General Sports Authority of Saudi Arabia’ in partnership with Manchester United.

Whilst advertising and sponsorship deals are of course a smaller affair than an actual takeover of a club, the ‘principle’ remains very much the same. Why have we never heard the media these past 14 years demanding to know why the Manchester United fans aren’t bothered about seeing their club selling its good name to the Saudi regime in return for serious riches that have helped their club / team win loads of trophies? Surely winning things isn’t more important for Manchester United fans than making a principled stand and refusing to support a club that is giving its implicit backing to a regime with such a poor human rights record?

As Groucho Marx famously said…“Those are my principles, and if you don’t like them… well, I have others.”